I just got back from a test paddle on a wild & wooly morning with one of my oldest mates, Stacka. He is an ex-rugby player, Tamarama Beach Inspector, Eastern Suburbs personality, & prospective sea kayaker. Tipping the scales at around 100kg (like me) our paddle offered the opportunity to take out the two 'big blokes' boats in the EK range, the Assateague from Impex & the Aquanaut HV from Valley. Conditions were at the er... 'less safe' end of the safety spectrum, with 15-20knots blowing hard from the south, with a 3m swell bedding down a very confused 2m sea. Suffice to say it's the first time I've ever caught waves off the point at Frenchman's Bay.

Head to head, there wasn't much to separate these two kayaks in performance, with the Aquanaut HV a little more close-fitting, with slightly less initial stability. The Assateague really is a big guy, big hauling dream of a kayak; plenty of room for big trips but a narrow enough beam to ensure performance that other large boats can only dream of. It has enough waterline length to be reasonably quick, but retains the great performance of it's smaller clone, the Currituck. Both held a good track with 20 knots on the beam, both rode effortlessly over the oncoming chop giving a very dry ride, but it was down sea that there were a couple of differences. 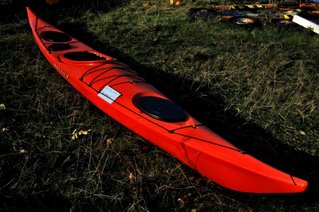 The HV is exceptionally fast once the hull begins to plane in a following sea, regularly blasting past 13-15kmh on surf rides - like the Nordkapp that's quick enough to ride onto the wave in front of the one you're initially riding, which is about as much fun as you can have in a kayak. The Assateague in the same following seas isn't quite as quick, but the spongy secondary stability allows you to carve around as you ride along, which is very satisfying. Both boats roll superbly & turn tightly, considering they are in the 5 & a half metre range, & importantly, they stay true to the concept of reacting predictably & truly to correctly applied technique. There's not a lot of point having a design that rewards a good sharp edged turn with a swim!

Without the experience of paddling these boats in challenging conditions, as were lucky enough to have presented today, you couldn't possibly know how they are going to perform. I'm constantly amazed that folks are prepared to part with thousands of dollars on a kayak that they aspire to paddle in the sea, when all they're able to do is test paddle it on a mirror calm stretch of water. Most of the kayaks around would have scared the cr*p out of a prospective buyer in the wind chop & confusion of today's paddle, yet this is precisely the stuff in which the Valley & Impex boats shine.

As for Stacka, even after a big blokes coffee & a BLT for brekkie post-paddle, he can't make up his mind between the boats, but then he is about the most indecisive bloke you could ever meet......
at February 29, 2008 No comments: Links to this post

Rob Mercer in the Valley Rapier 20

Rob had his brand new Valley Rapier 20 Racing Kayak out on Tuesday night, here's his review of the paddle & the boat:

"My Tuesday night crew looked unconvinced as I carefully lifted My shiny new Valley "Rapier" racing sea kayak from the roof of the car. At 6 metres long and 43.5cm wide it looks fast and 'tippy' even just sitting on the sand. The Tuesday night paddle is a bit of a tradition and the diehards make a point of going out regardless of the weather 'just to get a taste of the conditions'. Last night conditions were light with a 1.5 metre swell. We like to cover a few miles and catch a wave or two at our favourite point break when there is no action along the cliffs and I think everyone was wondering how I was going to manage in such a long skinny boat even on a good night.

The Rapier is very efficient, it is so smooth through the water that you dont realise how fast you are going until you look around you. Fast paddlers in fast sea kayaks kept dropping behind and they were working hard while I just cruised along. The big test occured when we left Sydney Harbour and headed North into the confused, rebounding waves between North Head and Bluefish point. Even in light conditions there is always some wave action here and I was thrilled with the seaworthiness of my new 43.5cm wide speedster. I could easily surf down the back of the southbound waves as we headed North.I could also sit in the bumpiest section off Bluefish point and, with a light steadying brace, hold station while the rest of the group caught up.With a high tide and a gentle swell "The Bower" was too slow for board riders so we had it to ourselves. Everyone in the group picked up some good rides and some of us had a little "rolling practice" ( I discovered the Rapier rolls well but doesnt like the steeper takeoffs).At sunset we headed back to Sydney Harbour catching the swells with a big moon low on the horizon behind us and the city skyline slowly emerging from behind the South Head cliffs at our foredecks. I had to agree with Rod who announced to all present on landing: "it's all good".
at February 22, 2008 No comments: Links to this post

Just a quick note to alert kayakers out there who haven't yet seen it, of the superb new Ocean Paddler magazine from the UK. As far as Sea Kayaking goes, this mag is the Vogue living of our sport, with incredible editorial standards in photography & writing.
The articles are jam packed with information about sea kayaking, as opposed to river & lake kayaking in sea kayaks, which in my opinion tends to dominate the American equivalent magazines. They have a few good instructional spots in each issue, as well as an overview of what is happenning in the broader paddling world, with expeditions underway & in the planning. It ain't cheap, coming out of the UK by post, but at about $11 per issue it is a bargain, considering the amount of information packed into each magazine. You can subscribe at http://www.oceanpaddlermagazine.com/
at February 08, 2008 5 comments: Links to this post

I took the Nordkapp out on Saturday morning for my first paddle in this legendary boat, & man, it didn't disappoint.
The aim of the exercise was to allow Jennie Connaughton, now the proud owner of an Impex Force 3, to get out on the ocean & test paddle her boat, just to seal the deal. I took the opportunity to wrestle the Nordkapp demo boat back off Rob Mercer to give it a try, after he & Les Allen from WA had given it a glowing review after testing a couple of weeks ago. We paddled off from La Perouse & headed out to Cape Solander with a pretty solid 2m swell, & a confused sea riding on top of that. The wind was a pleasant 10 knots, gusting to 15 knots, but it was a focussing test paddle, as the steeper waves had that 'about to break' look about them - that deceiving feature ocean waves can get from time to time, especially when they bustle into a shallow ocean floor as exists between the heads of Port Botany. Jennie handled the conditions like a pro, despite limited sea experience - I'd say her past life as a wave-ski paddler came into play as we bounced over the swell & chop. Out into the conditions the Nordkapp was well behaved & dealt with them as you would expect the world's first & most revered expedition kayak to do. It was the return run, with reasonably steep, fast following seas where I was very pleasantly surprised. Now, the Nordkapp has received some bad press in Australia for many years, due to a few manufacturers both here & in NZ perpetuating very close copies of the original boat design from the 1970's. Make no mistake, these designs are pretty tough to handle, especially in following seas. I would say the preponderance of rudders in Australia & NZ, compared to Britain & the US, is in no small way due to the performance of these Nordkapp-inspired kayaks, & the difficulty of keeping them on a good track. However, the new guys at Valley have made some subtle variations to the original design, which have obviously had their effect. Coming back with the conditions on Saturday, I flew, at one point surfing down the face of one green wave, over the top of the one in front & continuing the ride on that one for a good couple of hundred metres. I was expecting the boat to slew off waves, as a kayak of this length should do (& my previous Greenland-style kayak did virtually every time), but it held a very fast, straight line & absolutely powered down the face of waves. Without the skeg deployed, there was a little more tendency to veer to one side or the other, which meant I had to use my body a little more to steer, which is actually great fun if you don't have to do it for hours on end in an inferior down-sea design. With a little skeg in the water & the boat tracked like a beauty.
The boat is plastic (or rotomoulded polyethylene to be more correct), & I considerecd myself to have moved beyond the 'training wheels' phase of paddling plastic boats, into the status symbol world of composites, but this boat is making me have a re-think. There is little to distinguish this kayak from a composite boat - it's light, strong, completely watertight (seriously), & the Valley manufacturing process produces a stiffness that plastic boats of the past can only dream of acheiving.
All up, a fantastic kayak for a budding expeditioner looking for big-water adventures.
Oh, & by the way, Jennie did bloody well on her test paddle too. Look for her out on the water in her Force 3...!
at February 04, 2008 3 comments: Links to this post

I'll be down at La Perouse from about 7.30am, Saturday February 2, doing a test paddle for one of our prospective clients in the Force 3 & the famous Nordkapp. 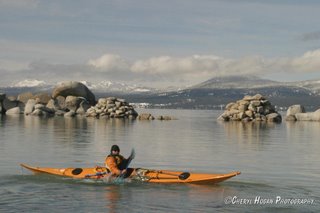