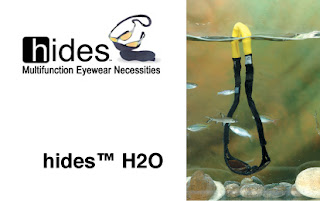 One of Rob's clients, Dave Rowan, bought Rob a brilliant pair of sunglass retainers a few months back as a thank you, called Hides H20. We reckon they were clearly designed by a kayaker who has committed untold expensive pairs of shades to the depths, because in a lovely compact little package, they pretty much cover all the bases familiar to every single paddler with a lamenting look on their face as their prize Oakleys disappear into the harbour.
Yes, yes, I can hear everyone saying, there isn't an invention out there to stop me being stupid enough to lose yet another pair, but check out these features. 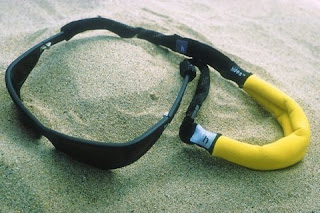 Firstly, these things float, with a removable float that doubles as a thin neoprene glass case. If you're heading to the bar afterwards & don't want to look like a dork with your floatie flapping around off the back of your head you can take the float off. The strap then clips together to give you a solid, fitted strap, in the mould of Croakies or Chums that most of you will be familiar with. When it gets dark or you want to stow your glasses in the day hatch, the float unravels to form a protective case. Sayonara to the mystery scratches on your lenses after paddling, that were caused when you blindly put the sunnies in the hatch next to your multi tool.
We sought out the manufacturer & have now got them in stock in red, blue, high vis. orange & groovy inner city black, for $17.00 including postage nationally. You can order them through our online store. We can now lay claim to the most expensive sunglass straps on the planet, but are happy in the knowledge that our expensive Maui Jims or Kavu glasses stand a much higher chance of seeing out the season!
at March 28, 2011 No comments:

I've got myself yet another new toy, a heart rate monitor slash GPS which I hook up on my training paddles to measure my performance & hopefully begin to gain some fitness.

It throws up all sorts of data which I'm sure would bore most of you to tears, but this little graph in particular is rather revealing.
I was in my ski, Rob was in the Taran, wind was initially a headwind of 15 - 20 knots to about 48 minutes, then a beam wind from 48 minutes to about 1hr 10mins, then a much stronger wind gusting to 27knots on the stern quarter for the remaining 50 minutes.
We covered just on 18km, and did some 2 minute intervals every 10 minutes, which you can see as the little blips in speed (blue line) to an extent & heart rate (red line) much more strongly in the graphs.
Guess what happens at 1hr 34mins? Total loss of speed & heart rate goes through the clouds? Just to show how stressful a capsize can be in rough water, there's the numbers! I flopped around for about 3 minutes after going over on a diagonal runner, very nearly lost my ski to the Tasman winds because I wasn't wearing a leg leash (last time that happens), then had three goes at getting back on, dropping in unceremoniously after each failure.
You can see the graph from there on illustrating the ride in the short, steep wind waves now being generated by a honking westerly surfing me along at an angle then stalling as I hit the troughs (or put on the brakes). Quite a ride home, and not ideal in a long waterline ocean ski, although it would have been rather a smoother line if I'd been going in the exact same direction as the wind.
Ah gadgets gadgets, nice to see one of them confirming an inalienable truth, scientifically recording me nearly browning my speedos…!
at March 25, 2011 No comments:

What happens on a demo paddle? How do you paddle a couple of boats over a short period & get some semblance of an idea of what it will be like, before committing a substantial amount of your hard earned towards a purchase? What do you look for if you're not an experienced paddler & seriously don't have much of a clue about the nuance of hull designs? How are you supposed to know what's going to happen to you & your new boat the first time you get into challenging water, if your test paddle is in controlled & calm conditions? How about your general skills, what's going on when the best reviewed boat on earth feels difficult on the water. Is it a crook boat, or are you desperately in need of some instant on-water feedback from a skilled paddler to maybe help you correct your own technical problem, which is perhaps giving you the wrong responses from the hull?
Buying a kayak is always a bit of a leap of faith. We try to minimise this by providing demo paddles in real conditions - at least as real as the paddler is comfortable with - and being alongside to offer technical advice on general paddling so you can get a proper understanding of what a particular boat is capable of. 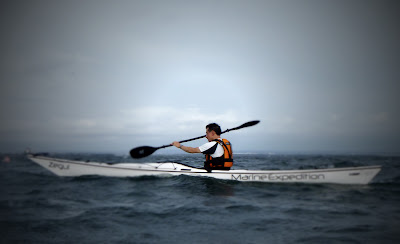 Tim in the Zegul 520LV
This morning I took Tim out for a paddle in blustery conditions just inside Botany Bay, with 15knot winds generating short, sharp, uncomfortable wind waves. He'd expressed an interest in the Zegul 520, & the Nordkapp LV, neither of which are true novice boats, both of which offer rough water performance, but very, very different boats both in concept and on the water. We spent two hours paddling into, across, & downwind, stopped in the lee of Frenchman' Bay a couple of times to get a feel for some of the chine performance of the boats, & generally messed around trying to test & push both Tim & the hulls of two very different designs. 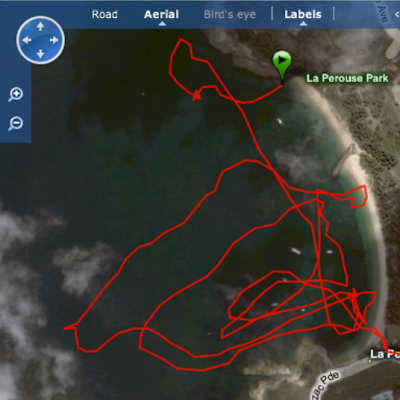 An aerial GPS Track of the demo paddle. Wind was 15-18kn from the SSW corner
Tim had a fantastic go. He pushed hard on the following seas, fell in more than once in his efforts, paddled across the wind in the uncomfortable chop & challenged himself beyond tipping point. He's a novice, but he's fit, brave & prepared to learn the skills required to become a sea kayaker. It was a brilliant morning, and Tim went away with a very good understanding of what boats shaped like the Nordkapp LV do, as opposed to what boats shaped like the Zegul 520 can do.
I love these sorts of test paddles because, well, hell I don't get on the water that often & we had fun. I love seeing people have a go, face the cruel reality that it's not easy to get good, but it's a brilliant thing to commit to something & begin the long & enjoyable process of attaining skills.
Sure not everyone aims so high, and more power to those with milder ambitions with their paddling - all paddling is good paddling. I just thought I'd share a nice story I had this morning from the perspective of an instructor, with the concept of a real demo paddle at it's heart.
Next time you go to buy a boat, ask about the style of demo paddle that is available, & then see if you can't get a bit more than just a solo paddle on a flat stretch of water, without any advice from a skilled instructor or guide. You will make a better choice if you're better informed.
at March 18, 2011 No comments:

Tuesday Night Paddle from the Deck


Here's a short video Rob shot from his Lumix FT10, mounted on the Ram Locking Camera Mount, set on the the deck of the Rockpool Taran. It shows his Tuesday night crew rounding North Head, and features some nice footage he captured while paddling backwards, of Wendy Stevenson & Shaan Gresser. These guys are good, note their terrific rotation & assured boat handling in the steep little meter or so seas, great to watch. I guess you'd expect Shaan to be in decent nick after just becoming the first woman to cross Bass Strait solo, here she shows a little of the poise & form that propelled her across to Tassie.
at March 11, 2011 6 comments:

PaddleFest 2011 - A Brilliant Day on the Water 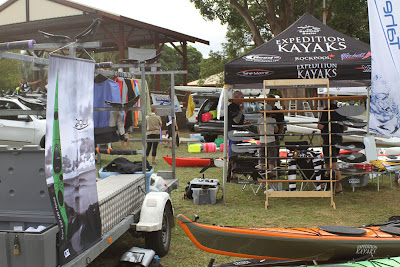 Paddlefest has been run for another year, on the shores of the beautiful Lake Macquarie. We were invited along by Lynn Parker from Paddle NSW, who along with her merry bunch of volunteers had arranged  a whole series of events revolving around paddlesports, all going off without a hitch during the day.
There was a 20km race, part of the Harbour Series that runs through Autumn, a shorter 10km race & a 5km fun paddle. Crews of chanting Dragon boaters ran heats along the lakeside to the cheers of the 500 strong crowd, Outrigger canoes competed against one another, sea kayakers paddled, edged & rolled in amongst the mayhem & there was a even a scratch race of craft constructed on the day using garbage bags, duck tape & cardboard.
We had a display set up with our demo boats which as usual were all out on the water being turned over by keen paddlers looking for their next purchase, and Rob, Chris James & I ran impromptu instruction sessions throughout the afternoon. We had a good turnout from the local Hunter Klanners, caught up with the ski racing guys we've gotten to know so well over the last year or so, & all up had a great day.

The short video below captures some of the colour & action of the day, & has a brief section showcasing Rob's Greenland rolling.
Thanks to the local Rotary club for putting on such a comprehensive paddling event, and also to Paddle NSW for broadening the spectrum by including the Harbour Series racers & instruction sessions. The team at Paddle NSW are doing some excellent work behind the scenes & deserve the support of all kayakers who like the idea of a body capable of representing our interests. Check out their website for a rundown of what they're all about.
Roll on PaddleFest 2012.
at March 07, 2011 No comments: