The author riding a glassy 3-footer, Surf Beach, Bateman's Bay (photo John Piotrowski)
What of this new sport, surf kayaking? It’s been around a long time in the UK where it was pioneered in the early ‘70’s, but has only recently surfaced as a viable activity in made-for-the-surf kayaks (rather than playboats) in Australia since Ross Boardman started importing the Mega range from the UK.
My journey into this spectacular sport began about 5 years ago with a whitewater creek boat, a Wavesport Score, which has very similar handling characteristics to a modern surf kayak, minus the fins. As a paddler who learnt the skills of surfing a kayak in a cumbersome sea kayak, this boat seemed to me to be about as good as things could get, with it’s maneuverability & speed on a wave face. Along came the first of Ross’ surf kayaks & I quickly realised just how much more was possible using a craft explicitly designed for the surf. In my old playboat, I would ride the initial face, then inevitably get caught in the break & bump along bracing, surfing backwards, generally out of control. Make no mistake, this is great fun, however it is really only replicating whitewater paddling in the surf zone. Whitewater paddlers will argue that this in itself is terrific fun, but it’s not what turned me on. As John Lennon said, whatever gets you through the night, it’s alright…..
A true surf kayak with fins allows the paddler to carve like a board rider, whilst also getting the most out of every wave.

So, for a sea kayaker wanting to make the jump to surf kayaking, how do you get started?
Firstly, you’ll need a reasonably good skills base. You’re obviously going to do a lot of swimming I you haven’t yet managed to crack a decent roll. Rolling a kayak isn’t the black art many make it out to be. I’ve often instructed paddlers through their first ever roll, & their normal comment is ‘is that all there is to it..?” Get yourself some good instruction (www.balancedboater.com) and depending on how flexible you are, you will find you’re cranking out a decent roll within a few weeks.
Secondly, undertake a careful study of the etiquette of surfing. There is an excellent guide HERE. Watch how surfers treat each other (maybe don’t do this at Maroubra), get to know the rules of the break & when you do finally get out there, OBSERVE them.
Finally, get out in a controlled environment with either an instructor or a competent paddler & have a go. Start small – even playing in the broken whitewater is a good learning experience for a novice – and build slowly. Check the weather & surf forecasts & pick the days when you’re going to be inside your limits, and get out among the waves. Wear a helmet – if you don’t need a head, you don’t need a helmet.
Where is the sport headed? With the rivers in this dry continent slowly evaporating, it’s a good bet that surf kayaking will develop into at least as mainstream a sport as whitewater kayaking in the years to come. In Australia we’re blessed with a wealth of surf beaches free of crowds, so there is no limit to the development of the sport.
At Expedition Kayaks we have just begun to import the Storm surf kayak from the UK, and it is a real performer. Check it out on the Surf Kayaks page of our website.
The Mega boats at Jervis Bay Kayaks are also worth a look - their range is much wider & includes composites. Above all, don't for a minute think that surf kayaking is a high-performance sport for the young & reckless. With a minimum of instruction & experience, you can develop your sea kayaking skills to a level you couldn't have imagined possible, with the help of a well-designed surf kayak. 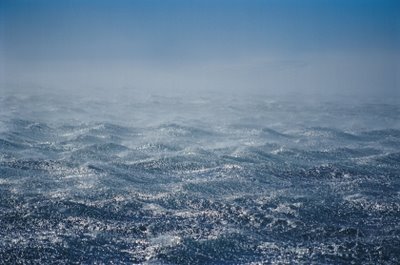 With a very solid southerly blowing yesterday afternoon, I thought I'd head out on my normal 12.5km training paddle to see how far I would get. Paddling up the Cooks River, protected by the breakwall, I didn't feel that things were too blowy, but once out onto the expanse of Botany Bay the headwind was immediately noticeable. Observations from the time I was out paddling show a steady 26-28 knots, with gusts up to 38 knots. My normal 8.7km/h exercise pace on the flat, windless bay was reduced to 2.5-3km/h, with the bigger gusts reducing me to zero (as read on my GPS), or actually pushing me backwards. It's rather unnerving to be paddling at your normal tempo & actually heading back to where you started.... I can only image what Stu, Andrew & Laurie must have experienced when they were hit with the katabatic winds in Antarctica.
The other thing a headwind like that does is whip up a relentless sea. I reckon there were consistent waves of up to 1m, about 3 seconds apart, constantly bashing into my bow, further hampering forward progress. All of this action does to tend to focus your concentration however, & when I checked my watch expecting 20 minutes to have elapsed, it was actually near enough to an hour. I figured I would paddle a further 10 minutes (to a grand total of 3km in total), then turn around. The 3km or so that had taken me 85 minutes to cover into the headwind, took a total of 13 minutes on the way back, as I flew along surfing the short-sharp wind waves which had so hampered my forward progress.
The lesson for me was one about forward progress once things get towards 30knots. Basically forget it.
at June 16, 2008 No comments:

I have heard my fair share of stories over the years about paddlers lusting for a faster boat, so they can keep up with hubby/paddling mates/ferries etc etc. I have never had a desire to go fast in a sea kayak (as opposed to a racing kayak), so it's always been a source of amusement, if not bemusement to hear people talking about our rather benign sport in the context of having to 'keep up' or 'go faster'. With a warehouse full of demo boats, each making various claims about being a cruiser or a speed machine, I'm at a bit of an advantage at judging the speed credentials of each. 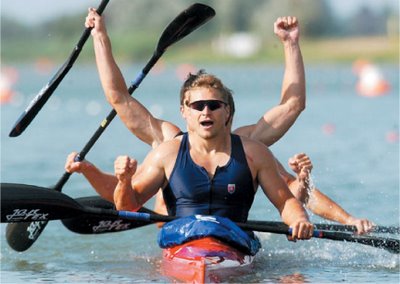 So, over the last month or so, I've been doing a 12.5km Monday morning paddle from the Cooks River boat ramp in Kyeemagh, to Dolls Point in Botany Bay, & back. My aim has been to push a little bit harder than usual, in an effort to get a bit fitter, and also to see if I can discern any speed difference in the various kayaks we at Expedition Kayaks are selling. I cruise 'plus 10%' at about 8.5km/h, which is faster than I would have paddled on any club or instruction trip for the past 3 years. In fact, if I was to head off on a club paddle at this pace I reckon I'd probably exhaust at least half of my fellow paddlers within half an hour.
Conditions have been pretty much flat & windless, so I haven't had to contend with anything skewing the results of my test times, and the conclusions are really interesting. The Force 5, which really & truly is an amazingly fast boat in sea conditions, is actually only about 300m per hour faster than the Norkapp when paddled on the flat. The Norkapp is not designed for flat water racing - it's a dyed in the wool sea kayak. The Assateague, which I love paddling in anything remotely challenging, but which I would have considered to be a reasonably slow boat on flat water, is only about 100m/hour slower than the Nordkapp on flat water. The Aquanaut, which is blowing away many 5.8m sea kayaks in sea conditions, is only fractionally faster than the Nordkapp, on the flat. Think about those results - effectively it means after 12.5km of paddling at a rate above that which you would find on just about any club or social paddle, these kayaks are all going to arrive at the same destination within about 4 minutes of each other. I have deliberately italicsed the pertinent parts of my analysis, to attempt to show the absolute codswallop that is behind the idea that boat A is fast, & boat B is slow. The simple fact is, if you can get some sea skills through a good commercial instructor like Rob, or in a club environment, you will a) have a more efficient forward stroke and therefore be able to paddle more efficiently (& therefore faster); and b) better be able to take full advantage of the environment around you in the sea, to propel your kayak faster.

A classic example of my speed furphy theory is the Montauk, a boat we sell for smaller paddlers, which is just 16ft long. It is a lovely design, with a Swede form giving it excellent hull speed for it's overall waterline length, but I would again have considered it to be a reasonably slow boat. I took a ski paddler out for a test paddle in the Montauk a few weeks ago - she was small in stature but big on power & technique - and in a 4km return paddle on the sea she had me going well above my comfort level just to keep up (I was in the Currituck, which is another boat that performs beautifully in the sea, but is a bit sluggish on flat water). Anyway, she proved once & for all that the Montauk is definitely not slow in the hands of someone with a good forward paddle technique.

So, think twice about the boat if you're worried about keeping up, or going faster - look instead at your own technique, and think hard about whether you're in the sport to race (in which case, go buy a racing ski, or if you really want to go fast, a Rapier 20), or to smell the roses......