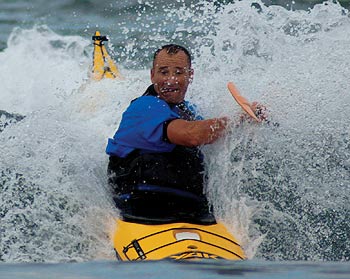 Sean Morley Dealing with the rough stuff....
In September 2008 British sea kayaker Sean Morley will be attempting to break the record for the fastest circumnavigation of Canada’s Vancouver Island. The records currently stand at 23 days 10 hours for a single kayak set by Joe O’Blenis and 19 and a half days for a double kayak set by Kieron Tastagh and Jeff Norville, both in 2007. Sean will paddle in a single kayak, a Rapier 20 manufactured by Valley Sea Kayaks.

Ian Tordoff in the Valley Rapier
He aims to complete the 700mile journey in under 18 days. Vancouver Island can present some of the most challenging conditions a kayaker can face including fierce winds and huge waves off the notorious headlands of Cape Scott and the Brooks Peninsular, high surf and treacherous reefs guarding the remote beaches of the west coast and raging tidal rapids reaching speeds of 15knots in the myriad of channels separating the Vancouver Island from the mainland.
Sean lives in California where he runs River and Ocean, the US importer and distributor for UK Valley Sea Kayaks. He is the current World Masters Surf Kayak Champion in the High Performance category.

In 2004 Sean completed the first solo circumnavigation of the UK and Ireland and all the inhabited islands; a six month, 4500mile expedition and the longest journey ever undertaken by kayak in British waters. I had the pleasure of metting Sean at a show in the US last year & have long been an admirer of his paddling. He has done it all, from high performance racing, to slalom, to some of the most audacious sea kayaking trips undertaken, & even suurf kayaking. If ever there was boat in which to break a record, the Valley Rapier is it - my money is on him to pull off this feat.You can follow his progress from September 22 onwards HERE.

Postscript: Sean completed his epic paddle in just over 17 days, beating the previous record set in a double by almost 2 days. He ended up paddling the standard Nordkapp due to the forecast seas & conditions, judging the Rapier to be a bit too twitchy for such a trip.

This is an article I posted on the NSWSKC chatline a few months back - it's an important safety lesson & bears repeating....
"I had an interesting experience surfing yesterday up here at Noosa Point. With not too many chances to get in my surf kayak nowadays I have managed four awesome mornings over an extended weekend holiday to get out on the famed Noosa point & ride a few perfect waves. For an idea of how good this spot is, check the photo below. 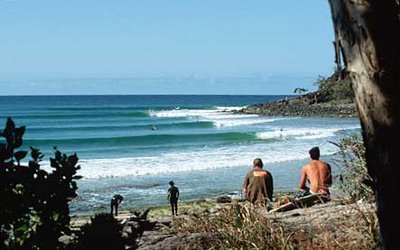 Yesterday, with another great lineup & a session from heaven beckoning, I allowed a bit of complacency to get the better of me & came off second best....
In a nutshell, I failed to make absolutely sure my skirt release loop was on the outside of the deck. After a couple of hours riding some of the best waves I've ever surfed, I decided a particularly good one would be my last, & rode it all the way in to the beach (a good 200m). I took on the shore break, which I had avoided so far on this day & the whole trip, bounced down a dumper, braced, then hit a rock which I hadn't seen. The boat flipped, which was fine, & my paddle caught on the sand & was taken out of my hands. No problems with any of this, as I was only in about 2 feet of whitewater, except that as I reached forward to pop my skirt the loop was not where it should have been. So I spent about 3 minutes in the washing machine, mostly upside down, head (with helmet fixed) banging on sand & the occasional rock while I fought to release the skirt or use a wave to try to roll up without the paddle. In the end one of the wrinkled old long-boarders with whom I'd been enjoying the waves paddled past & offered a paw so I could bring myself upright. Now, in 2 feet of water I wasn't going t drown straight away, but I can tell you it wasn't much fun & was peeing & snotting salt water for a good few hours afterwards. If it had happened in another metre of water I may have been in very serious trouble, but then I probably wouldn't have lost my paddle & would have rolled. I'm an experienced paddler & shouldn't have made this elementary mistake, especially when it's the first thing I teach people when we're making them do their wet exits & rescues. Why did I allow it to occur? Probably a little bit of excitement clouding my usual auto-pilot safety checks - Noosa is a great place to surf a surf kayak - & also the fact that I trust my roll & don't ever consider a wet exit. I can see that this is potentially disastrous combination which I won't be replicating. The lesson, check your set up every time you go on the ocean. My surf kayak is a very tight fit - necessary if you want to get as much out of it as it can offer - but only a little bit tighter than my sea kayak cockpit. The spray skirt was realistically a little tight for the boat, making it impossible to release without the loop, especially with the pressure of breaking waves sucking it on to the coaming. Check this on your own boat & make sure it will release with a good tumble turn (don't try this on your own...!). If you're going to be launching or landing in surf - even if as a worst case scenario on a leisurely day trip - wear a helmet. If I hadn't been wearing mine, which I do religiously, all of the scratches & bangs on my Gath would be permanently etched into my scalp. Lastly, while it's the most exhilarating & fun part of our sport, remember that the surf will sort you out one day when you least expect it. Make sure you've had good controlled experiences in the break zone before you take it on. If anyone wants to come for a surf with me, let me know...!"
at September 02, 2008 2 comments: Links to this post