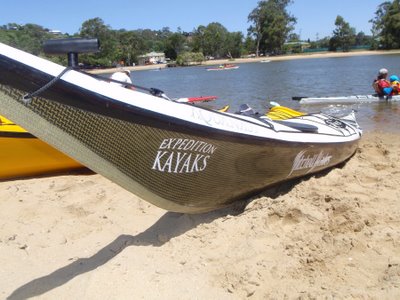 I've just returned from the terrific Australian Sea Kayak Symposium in Currumbin, on Queensland's Gold Coast. The event was a great start towards establishing an event that will hopefully become a part of the kayaking calendar for years to come. 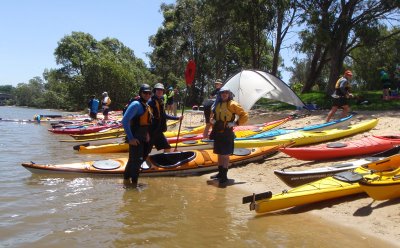 The weekend began for Rob & I with a 13 hour drive up from Sydney on the Thursday, so we were set up for the demo day we held on the Friday morning.
The demo day was an unqualified success, with Brian & Deb McCarthy ordering a shiny new Aquanaut each, & Brooke & Eddie paddling & then buying the awesome little Avocet. Several other paddlers turned up to try out our designs & attempt to get their heads aorund rudderless paddling. With a great new customised boat trailer, we will be doing plenty more of these demo days around the place, so keep an eye on our website for dates. Of course, we'll also take you out to demo paddle any of our boats, at a time to suit.
The venue for the show was the Currumbin State High School, where the opening honours were done by Christine Smith, ALP member for Burleigh. 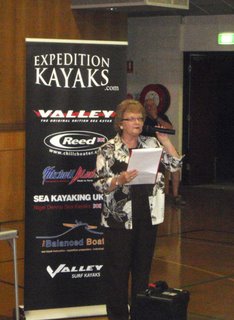 Proving that everyone has one, MP for Burleigh Christine Smith, gives her opinion on the Nordkapp.....
We set up our stand & showed off our shiny boats & Mitchell Blades, along with the other unique gear from our previously only online store. 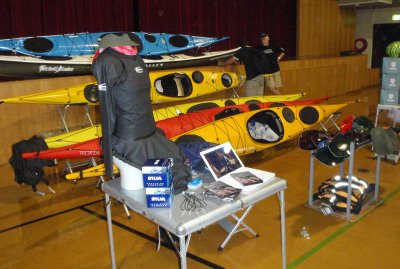 The Saturday had a pretty solid lineup of speakers & workshops and a short paddle in the afternoon, while the Sunday involved a full day on the water for the 100+ participants. While skills instruction was pretty basic in comparison to something like the iconic NSWSKC Rock & Roll Weekend, it was understandable given the lack of a generic grading system, and the fact that this was the first event of it's kind in the state. I'm sure everyone came away with a new tool in the skills armoury regardless of their level of competence.
After the instruction morning, paddlers were free to demo paddle the range of boats from the many retailers in attendance. 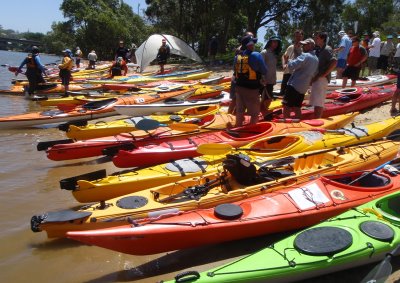 Queensland sea kayaking is definitely defined by the paddling opportunities available around the South East of the state. The open ocean is rarely accessible other than through a breaking river bar or tidal narrow, or of course through the teeth of a long beach break, and the sort of big water we get used to in the southern states around headlands, & with long period southern swell is generally absent in all but the biggest weather days. So, like all things in Queensland, people tend to take it a bit easy - all very admirable! If you want to see a paddling community smelling the roses, enjoying the true relaxation our sport can offer, go no further than the litany of 'pods' who paddle together up & down the Gold Coast, Brisbane & Moreton Bay, & the Sunshine Coast. To boot, there are awesome moving water stretches, without the 'consequences' of getting it wrong in the surf trying to surf your kayak at a beach break around Sydney. All in all, I was very jealous of the weather, water temperature & bar breaks available to Queensland paddlers. The folks at Queensland Canoeing are to be commended for having a go & pulling off such a successful event. If you can make it along next year, it's well worth the effort.