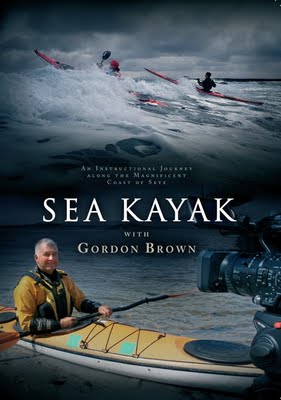 We've just placed an order for the first bunch off the presses, of Gordon Brown's excellent new instructional DVD, Sea Kayak. Those who have read his excellent book of the same name will appreciate the straightforward & insightful style in Gordon's instruction, and this film has been made with Simon Willis, a sea kayaker & film maker with years of experience. I like to do my instructing as part of a trip, where you can stop at various features & sea states & work on a new skill or stroke, & that's exactly the format Gordon follows on this terrific high definition offering. Viewers can return to study the coaching sessions, which use freeze frame and slow-motion, to analyze techniques. Once described as ‘Sea kayaking’s ObI-Wan Kenobi’, Gordon Brown owns and runs Skyak Adventures with his wife Morag on the Isle of Skye. As well as introducing novices to the sport in one of the most beautiful yet challenging parts of the world, Gordon trains and assesses to the highest level within the British Canoe Union. Click the image above to see a preview of the DVD.

Reviews have been glowing:
“fantastic...less like a textbook and more like a documentary”
PaddlingInstructor.com
“a DVD to watch time and again...for both education and inspiration”
SeaPaddler.co.uk
"Dynamic coaching in inspiring scenery. Gordon shows strokes in calm conditions followed by 'oh my god' conditions, displaying the same techniques in both."
Justine Curgenven / This Is The Sea
at October 13, 2009