Rob & I have just returned from an indulgent long weekend at Currumbin on the Gold Coast, where we attended the National Sea Kayak Symposium, run by Queensland Canoeing.
The event was well supported, with well over 100 paddlers attending, guest speakers, on-land talks & seminars, and a full day of on-water instruction & workshops. We drove up on Thursday in order to run our own demo day at Currumbin on Friday. Unlike last year I managed to get to Queensland without running the trailer into a petrol bowser, running out of gas or crunching a low clearance hotel entrance, so all up a pleasingly professional performance behind the wheel.
The Friday saw over 30 paddlers come along & test paddle our boats & paddles. With our shipment of Tahe kayaks due in the New Year, several people took the opportunity to put the exceptional Greenland through its paces, kindly accommodated by the owner of the only one in the country, Bass Strait veteran Brian Towell.
Greg Schwarz rolling the Tahe Greenland
Feedback from Greenland rolling boffins like Greg & Moira Schwarz & Steve Simovic was that it was the world’s easiest kayak to roll, while Brian reports that it is a low-volume joy to paddle on day trips.

Steve Simovic relaxing in the Currumbin sun.
We met many of the high octane stars of the lively Sea Kayak Forum, with pseudonyms like Raider, Gray Raider, Gnarlydog, Karrazy among them putting faces & real names to the exponents of shameful opinion & online humour! 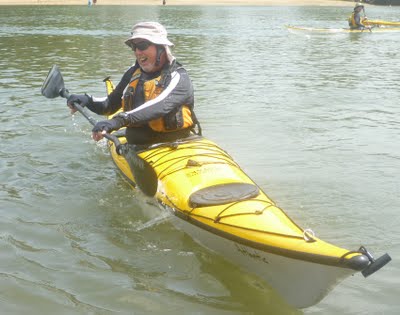 The Raider with a cross-bow draw....!

On the Sunday I took a willing bunch of guys, Rhys, Alex, Glenn & Gary (who also responds well when you call him Dave for an hour, sorry mate…) out to practice some raised edge surfing on the much touted Currumbin Bar. A 20 knot northerly had turned the gleaming glassy swells I’d been dreaming of in days prior into something that looked more like the river in Deliverance. With great gusto the guys slugged it out in an hour of bracing, buffeting & surviving, but I don’t think we were really any the wiser on technique at the end. At least it was almost fun….. 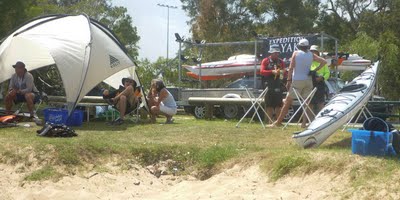 Rob & I had the humbling experience of a half hour or so of informal forward stroke critique from Amanda Rankin, a great lady & K1 & K4 Olympian at the Athens games in 2004. Doing my best to hold form in the Rapier as Amanda cast her expert eye over my stroke, she concluded that a few things I really truly thought I was doing well need substantial amounts of work. Without boring you with the details, it was fantastic to be given something to again set my sights on to improve. Why on earth sea kayakers can believe that we have nothing to learn from other paddle disciplines is beyond me – Amanda’s forward stroke was a sight to behold at close quarters & has inspired me to get rotating. To those of you out there that I have barked at over the years for not rotating, well, I wasn’t even doing it properly myself, so there you go!

Silvio Testa back from a trip to the edge in the Rapier 20.

The single most pleasing aspect of the weekend was the ambition of the paddlers in attendance. At our demo day on the Friday just about everyone was rolling, performing tricks, drills, showing good form & modern technique. There is no hard-arsed intelligentsia who tell it like it is in Queensland, and the newest ideas get oxygen just as readily as the older lessons are absorbed. Friday was a bit of a skills extravaganza, with advanced strokes on display from some paddlers who have only been paddling for a few months. Martin are you out there? It was great to see. Over a bottle of wine on Friday night Rob & I pondered a guy like Nigel Dennis, certainly one of the modern fathers of sea kayak instruction, and how over the years he has managed to always have the newest ideas. At no stage has he hung up his skirt & decided there is nothing left to learn & everyone has to do it like they’ve always done it, and that in many ways exemplifies the skills revolution that is taking place in Queensland. In a sport with its fair share of crusty old buggers who refute anything counter to their time honoured rituals, always remember there is another, better way of doing things around the corner. 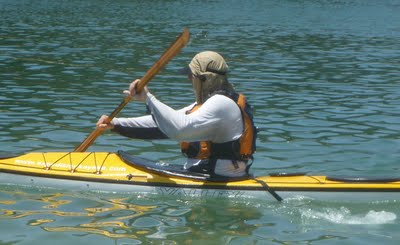 A broad church of ideas....

The kayak industry was also on show in its brightest incarnation, with a refreshing camaraderie among competing business, boats & personalities. Everything from Surf Kayaks to Surf Skis were on show for paddlers to try out, with a vast resource of information in the trades hall available to anyone with a question or query. Ten minutes talking to Ross Cook from Roscoe’s Canoes is like a mini history lesson in the way the paddling world has developed in this country, while it is always a pleasure to catch up with guys like Christian from Roscoe’s, top instructor & owner of Adventure Outlet, Craig McSween (despite all that stuff they say about him ;-)), & Bob ‘the legend’ from Rafta Kayaks.

The queue for the Tahe Greenland

All up a top weekend for sea paddlers. Thanks so much to everyone who made the effort to come along & see what we had on offer, it felt like a reunion most of the time. We’ll be back at this event next year, it was a ripper.