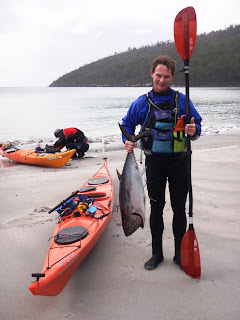 Tasmanian paddler Nick Gust sent in a photo overnight of him & his prize catch, a 20kg Southern Bluefin Tuna. He caught this blue-ribbon game fish while paddling his Nordkapp RM, some feat when you consider these animals have an amazing amount of power through the water. No Titanic beamed fishing SOT here folks, a proper sea kayak which many paddlers out there consider as being at the challenging end of the spectrum for stability.
Nick said it took him 'for a bit of a ride', my interpretation of which is probably the same as yours. Hmm, Nordkapp, narrow beam, serious sport fish on the end of the line, cold Tasmanian water, eskimo roll while being pulled sideways through the water not really possible if I capsize, balance & core strength required to actually LAND the fish, then store the bloody thing somewhere, and so on.....
We are impressed, I think it's probably as close in the modern world as you could get to experiencing an Inuit-style hunt without.....umm....harpooning a Beluga. And you know what I really think...SAVE THE BELUGAS!
Nick, you're a legend, amazing story & one seriously Maui-proportioned fish.
Nick has written a story for the next edition of the Tasmanian Fishing & Boating News, so keep an eye out for it if you want the full tale from the man himself.
The Southern Bluefin itself is of course a species under threat not just from the usual suspects, the Japanese fleets (who admit to harvesting 100,000 tonnes over their quota), but also from Australian commercial fishing. If you want find out more, check out the Commission for the Conservation of Southern Bluefish Tuna.
at May 28, 2010