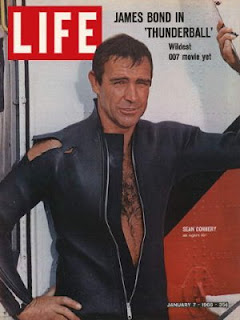 Remember the Bond flick Thunderball, where the greatest Bond of them all, Sean Connery, spear-gunned the bad dudes in his full zipper wetsuit, with Claudine Auger hanging off his left hip?
That was a seriously cool piece of kit, the well fitted, full zippered water jacket, so you can understand our excitment when we spotted a contender for this classic relic in the NRS range. 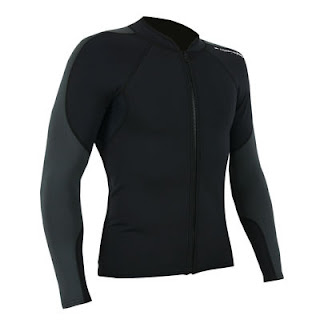 I secretly ordered one in with a shipment last month to test out, but Mercer, clearly another Connery fan & old enough to have watched Thunderball when it came out, beat me to it & has been flouncing round the Eastern Suburbs seaways wearing it ever since.
Finally we landed our stock this week, so I've had my very own one on pretty much ever since, and I've gotta say, I'm feeling pretty damn Connery wearing it around, with our without my kayak.
It's made from HydroSkin, the laminated Terraprene fabric that seems to be winning fans in a very short space of time, features the Titanium fleck in the weave which radiates body heat back at you, and has a full length zipper to allow you to regulate your temperature. That might sound a bit like some clever marketer's angle, but the reality is that when I'm going for a blast, the extra airflow the lowered zip allows is genuinely refreshing, while the sort of downtime we sea kayakers generally build into our paddles make the 'zipped up' position a great heat retainer.
It has all of the clever design features of the Hydroskin top, including a spandex underarm gusset to remove the possibility of a hot spot for chaffing. For last Friday's paddle (video below) which was as much in the water as on top of it, with a stiff breeze chilling anything exposed, I layered a thin Merino wool t-shirt underneath & felt toasty, without once overheating on the downwind leg, when I was mostly firing along with a lot of effort. For me it's the winter ski paddling top I've been looking for to prevent me from overheating, without sacrificing the first principle of cold water paddling which is 'dress for the water, not the air temperature'. 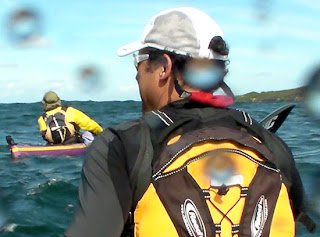 The NRS Hydroskin Jacket in action, from my best angle….
Best of all, if you're not quite built like Bond in his heyday, the jacket comes in two cuts, a close fit, in which sizes M & L will suit most women in the 10-14 range, and the larger sizes fitter blokes under 90kg, and a more generous cut designed for barrel chests & blokey proportions.
Stock is good, and you can order them through our online store for $109.00, including delivery nationally.
at May 18, 2011