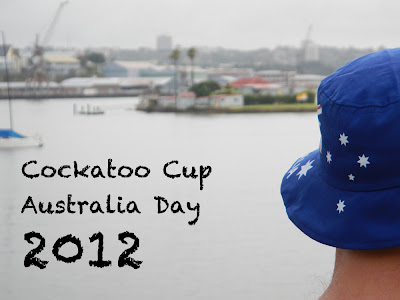 The Cockatoo Cup was run & won yesterday on a grey & sticky Australia Day. Despite the dire weather, more than 100 true believers turned up in a bewildering array of craft. Just casting my eye over the field lined up on the beach, I spotted spec skis, ocean racing skis, one, two, four & six person outrigger canoes, dragon boats, SUP's, plastic sit on tops, even a couple of Polynesian looking craft that I don't want to name & risk offending my coloured brothers!
The club running the gig, the Pacific Dragons, have obviously developed a fun & inclusive culture with a vibrant social scene no doubt driving the enthusiasm of their on-water success.
As outsiders sponsoring the event for the first time it was nice to see a paddle scene entirely removed from our own with so much appeal.
The briefing was novel, with a dire warning about the dangers of dehydration, & a reminder that you do have a natural reserve in emergencies, followed by a demo of how to extract said reserve & drink it, in case anybody might have thought it might be a bit um, unhygenic...
I entered the race in my Epic 18X, & when asked about my handicap I remembered that Tony King, the owner of Epic here in Australia had told me he was also racing, & would be in the V8. I scrolled down the list & spotted Tony's name, and said 'yeah, I should be somewhere around his speed in the V8 so stick me in his group….'


I kitted up & headed onto the water, watching my mate & fellow sea kayaker Tim Kennings depart in a group 20 minutes before me. TK is no slouch in his Nordkapp LV & as a former champion Superbike rider must have a killer competitor buried underneath the most amiable of personas, so I started to think maybe I might have been a bit over confident in my handicap selection. Me? Over confident? Nah…. 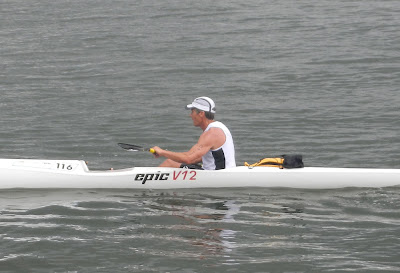 Tony, NOT in a V8!
I looked around as my group marshalled for the start & there was Tony on a V12! He muttered something about being sorry about that, loaned the V8 to a nice lady blah blah blah. Not only that, but alongside him were four other fit dudes in V12,s V10's & a Fenn Elite. Note to self about paying attention at marshalling. In golfing parlance I could never be accused of being a burglar….
At my core I'm, a filthy cheat, and I was planning a race where I'd hook onto a faster paddlers' wash & cruise the 14.5km, blasting home well rested over the final K & decimate the field. Instead I managed to foot it with the big guys for a good 20 or 30 seconds before racing the entire soupy course under my own questionable steam.
On flat water if you want to go fast you have to be fit, so I'm at an immediate disadvantage! I'll admit that flat water racing is not my go, the appeal of the sea for me is my fascination with everything that is going on in the fifteen square metres around me, watching waves, trying to link runs & varying strokes, edges, shifting your weight to try to take advantage of the shapes magically appearing in front of you. I can honestly say I've done 8 hour paddles on the ocean that have felt like less time than I spent on Thursday moochin around the Cockatoo Cup course!
Anyways, I plodded around the figure 8 course which nicely looped the picturesque Cockatoo, Spectacle & Rodd Islands twice, and then lined up Tim on the home stretch to sneak past him just before the finish. If I had any breath left I would have told Tim how well he was doing in a boat not quite as quick as my 18X…! 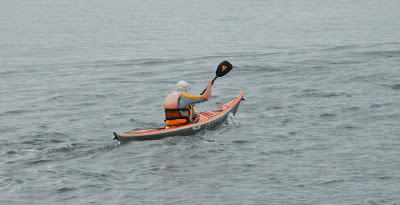 Tim Kenning's back, all I saw for 95% of the race….
I was happy enough to finish in a tick under 90 minutes, if I was a horse you'd say I was well worked, but maybe a run short of a decent showing….
Rob & I then snuck out in the new Epic double ski & absolutely blasted it around the little island in front of the start. Sitting in the forward seat of the ski is like being in the Channel Nine highlights reel, we were gunning along at 15kmh plus without really trying, what a hoot! It's also remarkably stable, more stable in my opinion than my V10S, even with Mercer wobbling around in the back!
A presentation in a rainstorm & a sausage sandwich at the BBQ finished off an excellent morning.
Thanks to the Pacific Dragons for a great event, and to Tony for a brilliant fix!
at January 27, 2012