Back to the Hawkesbury Classic

I've discovered over the past few years that withdrawal from competitive sport has left me constantly in need of a goal. Without something to aim at, I find myself wandering a bit with my paddling, fitness, motivation, you name it. I no longer have to beat someone else to feel satisfied (thankfully), but I still have an urge to keep pushing boundaries & limits & find new things to take me out of my comfort zone.
Over the past year I've been lucky enough to have a couple of good ones to shoot for, and the preparation for those two big paddles has been absorbing & tremendously rewarding.
August has arrived in Sydney & the weather is starting to look more inviting, so I decided that this year I'll have another crack at the Hawkesbury Classic. 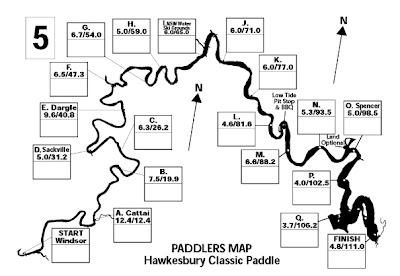 For those who don't know, this is an iconic race held over the night of the full moon in late October, along a river that winds from the foothills of the Blue Mountains at Windsor, 111km near enough to the mouth at Brooklyn. It started out as a bunch of of mates looking to organise a paddle down the Hawkesbury & raise some money some 35 years ago, and has built into a much anticipated event for paddlers of all abilities, craft & motivation, which regularly has a starting field of 500 paddlers.
I first did the race in 2001, in my first kayak, an Old Town Nantucket. It was 14'10" of pure thoroughbred, with a top speed of somewhere in the vicinity of 7kmh, and I can still hear the salesman telling me it was an ideal choice for the sea & the Hawkesbury race. 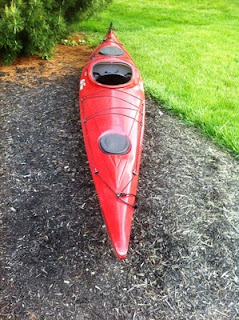 The Old Town Nantucket (or Bucket…)
You wonder why I'm so careful about making boat suggestions to our customers!
I trained a couple of mornings a week on the harbour between home at Annandale & Darling Harbour, and felt I was right raring to go come race day. 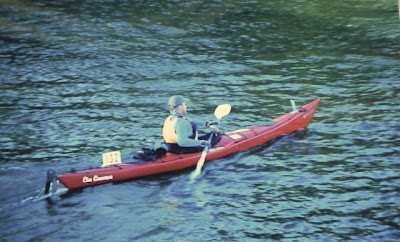 Setting off on my first Classic in 2001
17hrs 53minutes later I crossed the line at Brooklyn, in a paddling feat that to this day remains the hardest thing I've ever done.
Here is a photo of me finishing in '01 with my thermal wrapped around my head, shirtless, smiling and completely rooted…. 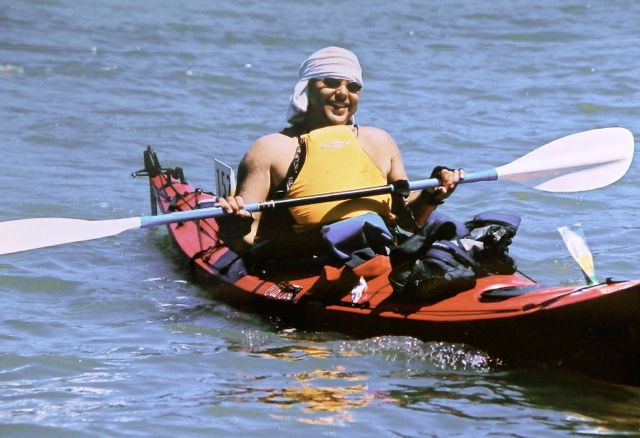 The following year I realised I'd better change boats if I wanted to go faster, so I upgraded to another elite speed machine, the Current Designs Storm (another great sales jobby, you'd think I would have learned…) This time with some sea miles under my belt, a little bit of club instruction from my new-mate-who-talked-too-much Rob Mercer, I managed to knock four & a half hours off my time.
Coming back a third year, this time with a shiny new purple fibreglass & kevlar Greenlander Pro that I'd paddled twice in the lead up week to the race, I got down to 12hrs 13mins, a time I was happy enough with considering my trials of 2001!
From 2003 the kids arrived and my attention turned squarely to paddling on the sea, where it has remained ever since. Even though I'm fitter & technically much better than I was back then, I'm still acutely aware that flat water paddling requires fitness above all else to cover big distances, whereas sea paddling gives you the luxury of using your skill in the waves. It might not be easier, but it's way more engaging & the time seems to pass faster, as do the miles, for me at least.
Regardless, with a welter of fast boats now positioned under the EK banner, I figured 10 or so weeks of targeted training and a proper crack at the race was in order. A week into it I'm feeling motivated, have already dropped a few kegs, and I'm pondering whether to use the Taran, Rapier 20, Epic 18X or the Pace 18. None of them have quite as much character as the Old Town Nantucket, but they have a few more wheels.
While finishing is always the goal of anyone who enters the Hawkesbury, a paddle that clocks about 100km's is not to be sneezed at after all, I would like to try & do a good time, I figure a shorter Classic has got to be easier than a long Classic, & I should know!
You can enter the race through the Hawkesbury Canoe Classic website HERE. Proceeds from the race go to the Arrow Bone Marrow Foundation.
at August 17, 2012