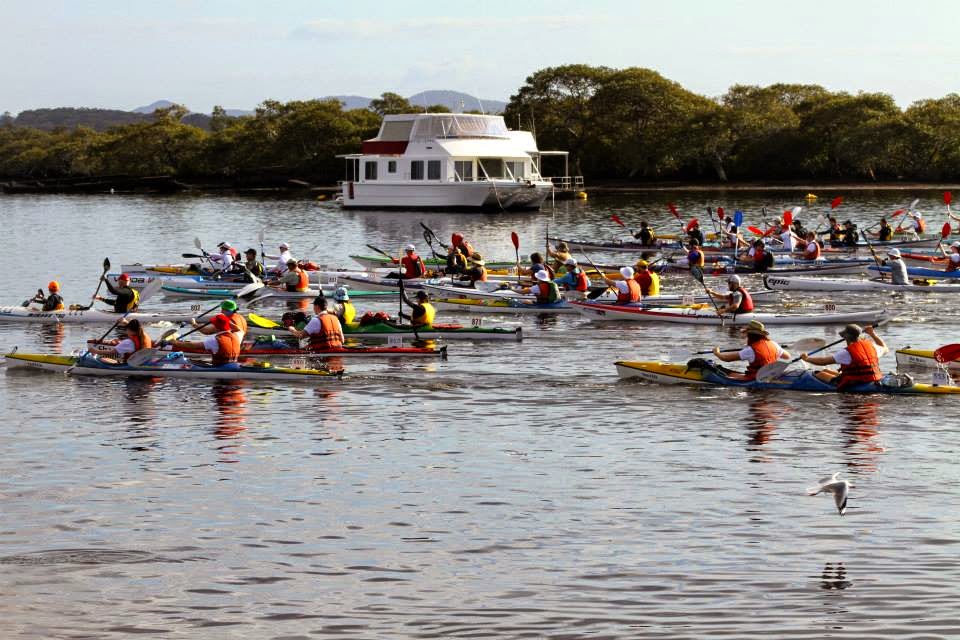 "Estimated time of arrival 1.30 pm
Been up before the sun and now i'm tired before i even begin.(now you're flying) i got so much work in front of me,(really flying) it stretches out far as the eye can see."

Apologies to the Hoodoo Gurus.....

I was lulled back to the Myall Classic, a festival of paddling that encompasses a 12km, 27km or 47km race along the beautifully scenic Myall River a couple of hours north of Sydney, with the promise that 'this year the tides are going to be great'. Last year's Myall was hard, 30km of 47km by my count, into the teeth of the tide, but this year, well one nameless bloke - Steve Dawson - even said it was going to be like a magic carpet ride home from the 23.5km turn.
Sure enough, the tide tables looked very nice, a strong flood tide to take us down the river to the turn, then a building ebb that should have been honking by the time we careened across the finish line, crowds lining the banks cheering madly while we sprang forth from our boats, did a few push ups & then went for a warm-down jog & a stretch.
Let's just say that three weeks of torrential rain into a lake system several times the size of Sydney Harbour, with one skinny little brown river outta there, should forever-more be a consideration when there are softies like me entering these things, unused to the brutality of an opposing flow for hours on end, and not a frigging wave in sight.
I'd describe the journey in detail but my counsellor has told me to give it some time before I peer back into that dark place.....

My own race was a great shake down for the Hawkesbury Classic, & I'm now nearly certain I'll do that race in my V10. Comfort, ergonomics, and my hydration & nutrition system were all put through the wringer & came up green. One thing about paddling 47km under race conditions, you find out every likely cause of pain & anguish, and can then spend the 6 weeks before the Hawkesbury tuning them out.

I had one incident about 2km from the end when I noticed a K1 paddler having some stability issues on the final stretch adjacent to Swan Bay, where a brisk easterly was tossing up a short beam chop. I changed direction to tail the boat and was only a hundred metres behind when the inevitable capsize came. No worries I figured, if there's one thing I know how to do it's an assisted rescue, but the complexity of the situation dawned on me as I rafted up. With no grab lines on my ski or the K1, it was a battle to get the kayak over my lap to try & drain it, and even when I managed that I realised I was no chance of emptying the flooded shell, not to mention actually assisting the paddler back into the cockpit. I figured the only thing to do was to set up a rafted contact tow & let the wind take us to a set of mangroves some 200m to the west. Lionel turned up in a sea kayak shortly afterwards & we managed to wrangle the K to the beach, whereby we emptied it & the paddler carried on with a pretty fearless attitude to the finish. I now know why most K1 races happen within short swimming distances from a safe shore!
The marathon crowd themselves, maybe because their chosen pastime is one which less tests, & more reveals character, seemed to revel in the conditions. I moaned loudly to anyone within earshot during the event and was told to shut up & paddle, more than once, and fair enough too! While other racing disciplines around the place wax & wane in their popularity, marathon is positively booming, and I reckon it's because of what happens off the water. Paddlers are mostly affiliated with a club, the clubs seem to be built on the social side of the sport, and everyone works hard 'on the field' and celebrates each other's accomplishments on the river banks. The whole thing has plenty of soul.
Bob Turner, Tony Hystek & the crew from Paddle NSW did a great job running the event so smoothly, managing nearly 300 paddlers & keeping pained smiles (or maybe they were grimaces) on most everyone's dial. It's an event we're pround to be associated with as a sponsor & one for your bucket list.
at September 15, 2014