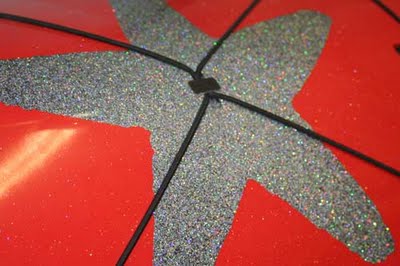 Friday was my day to trip into North Wales to see Lance Mitchell from Mitchell Blades & also Mike Webb from Rockpool.
Lance’s new factory is in Chester, a Roman city with a wall round it keep out the barbarian hordes.

I’m a bit of a sceptic of the car GPS systems – I reckon they slowly kill that part of your brain that navigates, leaving you even less human that you were. However, a combination of jet lag & a rigorous social schedule had well & truly killed the navigation part of my brain already so I was grateful for my little friend telling my to ‘bear right in 800 yards’. Lance is a bit of a go-getter, starting his business in a tiny shed at the back of his parents lovely B&B, and recently moving to a much bigger facility as his order sheets have over flowed. Mitchell Blades have very quickly established themselves as the premier paddle manufacturer in the UK, and it is great to see Lance’s paddles getting more & more refined, lighter & also to see the evolution of some innovative new shapes, such as our own Bomborah. 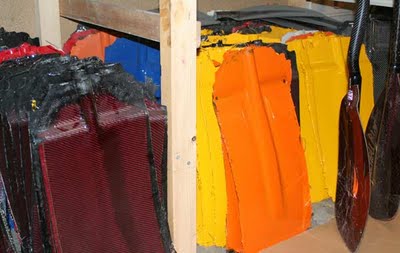 Lance was hugely helpful showing me around the process of making his paddles, & we came up with a couple of innovations which will be here with our next batch of blades. Look out for the super light Bombora LV, a blade aimed at paddlers looking for a lighter load on the water, and a crank shaft with a broad crank position, eliminating the need to customise the crank to each specific paddler’s stroke. 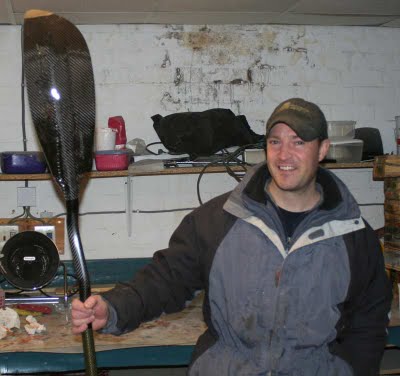 Lance with the finished product

From Chester I drove down the A55 along the North Wales coastline, through the Welsh ski fields (with almost top to bottom snow), and past the tidal waters that we see in Justine’s ‘This is the Sea’ series. Rockpool are at Holyhead, a stone’s throw from the Anglesey tide races like Penrhyn Mawr. The scenery was stunning; it’s easy to see why this little corner of the world is considered one of the Mecca’s of big water sea kayaking.

Everyone had told me what a great bloke Mike Webb is and it was nice to put a face to an email. Rockpool are a much smaller manufacturer than the likes of Valley, NDK & P&H, so Mike’s ethos is to compete on quality, service & constant evolution. He has developed a racing sea kayak which John Willacy recently blitzed around Anglesey, breaking the circumnavigation record, and is constantly finetuning his signature designs, the Alaw, Alaw Bach and the new GT. 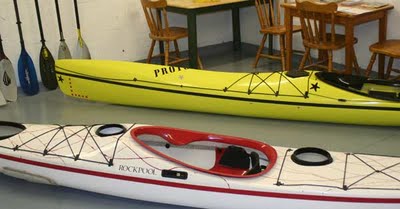 Listening to him explain his logic in designing the myriad features on his range it becomes apparent that he really is at the forefront of modern thinking on boat design & fit out in sea kayaking. It was great to see a few of the boats from Rockpool that we don’t yet import such as the Alaw & the Isel, and to just shoot the breeze for a couple of hours. And yes, there were starfish everywhere......

My day was rounded off with a big send-off at my old cricket club. It’s weird to come back to a town like St Helens after such a long time away (I last played here in 1994). About the only thing that had changed was that everyone had a mobile phone, I felt like Buck Rogers….

I’m now sitting at the airport at Frankfurt nursing a bit of a hangover & the effects of another night with bugger all sleep, waiting to catch a plane to Tallinn, Estonia. Current temp forecast for Tallinn is -17C, which will be a new experience….