Keith Oakford in the Aquanaut RM

NSWSKC Sea Instructor Keith Oakford recently graced the institution of the Tuesday Night Sydney Harbour & Beyond paddle with his prescence in his new Valley Aquanaut RM. In typical Keith style, he waited for a night when there was a 25 knot plus southerly blowing a confused 3m+ sea around to join in, & in doing so find out what his new boat was capable of, in some difficult conditions.
The slideshow above shows a small slice of the action, on a night where most of the group were wide eyed. Keith had a hell of good time in his boat, as evidenced by his play in the mess, & is stoked with the Aquanaut.
Keith is a Bass Strait veteran, & a very active sea instructor with the NSWSKC.
at April 17, 2008 No comments: 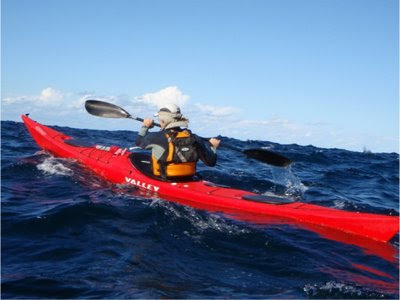 Chris James showing picture-perfect forward-paddle poise in the Aquanaut RM, off Sydney, April 2008.
We are finalising our order of the next shipment of Valley kayaks, after a phenomenal response to this brand again being available in Australia. If you’re interested in custom-ordering a colour or layup for delivery in late August, please let either Rob or I know. We’re aiming to cut-off on Friday, April 18. Browse through the links page in the left menu to the Valley UK site for options. I'm personally ordering an Aquanaut in ultra kevlar (all kevlar, hull & deck), with a clear hull (like the Rapier those of you lucky enough to be at Rock & Roll would have noticed) & some sort of funky deck colourway. I can't wait........
at April 14, 2008 No comments: 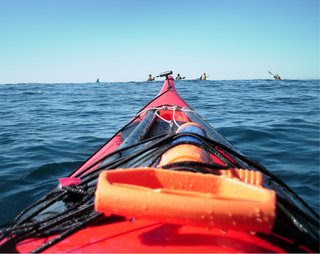 View from the Norkapp
Another Rock & Roll weekend has been & gone, my 6th all up, & what a great event. For me it began on the Thursday driving our 3 Valley RM boats down to set up the Expedition Kayaks display, & finished on the Monday arvo with Bob from Rafta Kayaks towing me around the campground trying to jump start my car! Hopefully that's the last time a Rafta has to tow an EK! Thanks Bob, you're a legend.... 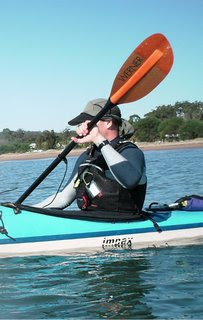 Ian Fletcher heading for Black Rock
With special guests Nigel Dennis from the UK & John Kirk Anderson from NZ, there was enough good advice being passed around to make everyone stop & think about how we do things. Nigel in particular was a revelation. I've heard things about his boats, often not too complimentary, but having met the the guy I can't imagine that they're anything other than terrific. The number of good paddlers around the world that paddle them has to bear testimony to that. It was interesting to hear that he & his group of 4 circumnavigated South Georgia in 5.4m boats - considered long in the world context yet too short in the general philosophy of Australian kayakers. Nigel's advice on forward stroke & rescues have made me a more thoughtful, less dogmatic sea instructor. One thing in particular stands out - if you're having trouble with your paddle stroke, be sure to have a good hard look at the length of your paddle! Chances are it's way too long.

Ian Fletcher & Alan Hale playing off the southern reef of Black Rock.
John Kirk Anderson drew a direct relationship between the general lack of skills in NZ Sea Kayaking with the absolute preponderance of rudders, which served to remind me of the virtues to be gained from developing proper sea skills, independent of an overbearing tracking aid.
As for trips, I led a group including our 2 Queenslanders, Silvio Testa & Damiano Visocnik, as well as WA visitor Alan Hale out to Black Rock, an 18km return trip which featured dolphins & millpond seas. We were able to get a couple of people out on the sea who had never ventured past a headland - well done Lauren & Kaye! Day two began with a superb trip out to the Tollgates, with a large group of 14, again including some real novices. The forecast of benign weather allowed us to get these guys out to a tricky destination safely, with just a small taste of the joys of paddling on a heaving sea. We were lucky enough to spend 15 minutes with a sleeping 2.5m fur seal, as well as spotting dolphins & a few fairy penguins. I checked a sea cave on the southern edge of the Tollgates to see if we might be able to guide a few people in for a go at this up-close thrill, but a sudden 6 foot wave made me think twice about taking a risk like that! Having Paul Loker out there helping to lead the trip was a real pleasure, Paul being one of the most experienced kayakers in the country, blessed with great judgement in moving water.
From the perspective of our business, Expedition Kayaks, Rob & I were thrilled that so many people took the chance to test paddle our Valley & Impex kayaks. Even if they're not intending to buy one, it can only help our sport if people can begin to believe that it is possible to competently handle a kayak without the need for a rudder. All up, the best weekend you could imagine for someone new to the sport, or looking for some like minded souls with whom to share knowledge & experience, while having a hell of a lot of fun. Congratulations to the NSWSKC, especially Stephan Meyn & Rob Richmond on such a great event.
at April 09, 2008 2 comments: