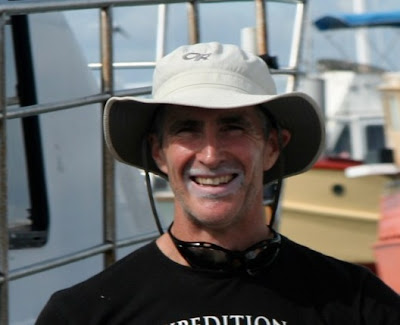 Just over a week ago we lost our great mate Chris James.
Chris was the third member of our paddling team, and with his paddling skills forged in the heat of heaving seas & crunching surf, his attention to detail and endless reserves of optimism we had pulled off a couple of memorable trips, and had many more in the pipeline. 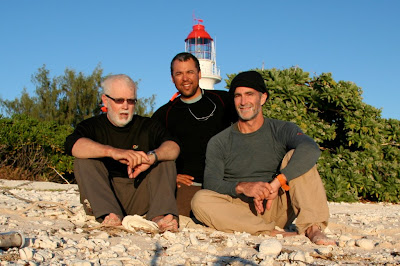 Chris was an incredible guy, fit & strong, a technician on the water of the highest order, and a mentor to so many paddlers. He was one of those rare people who'd take on a new challenge with relish, immerse himself in it, only happy when he'd well & truly conquered it, and then use the experience gained to build on the next big idea. And man did he have some big ideas.
His brilliant entrepreneurial skills had seen him establish a long line of successful businesses, always working away on some new deal or plan, seeking out that elusive win-win point where everyone could walk away happy. Our trip meetings were often held at one of his beautiful restaurants, where as Rob pointed out in his touching eulogy to Chris at his funeral, we would bemuse Sydney's glitterati as we spread out nautical charts across a vacant banquet table and debated plans over a cold beer or three.
He was a great Dad to his little girls Kasey, Darcy & Lucy and his eyes shone when he spoke of his beloved soul mate & wife Sally.
We shared the modern affliction of busy business & family lives, & I considered Chris to be the bloke who had best managed to find the balance that we all seek. I've reflected on the way he went about things & realise that there is nothing wrong with seeking excellence in anything you do, it seemed to be the way Chris naturally attacked life. He was the kind of guy you just wanted to be like.
Rob & I shared some unforgettable moments with Chris & we are both devastated by his loss, so unfairly in the absolute prime of his life. I wrote about him after our One Degree paddle earlier this year 'the next time I paddle anywhere with him I'm going to sneak some Kryptonite into his day hatch. That'll stop him…!'  My lasting memory of that day was the final couple of hours where we were getting belted by breaking seas in the dark, after more than 100km of paddling. Chris started to laugh as one by one we'd get our go at being swept sideways by a hissing wave, and something that was probably quite grim suddenly became a bit of a boys game of roulette. It was typical Chris, a man who thrived on the idea of consequences and lived life as an adventure.
We have shed too many tears over the past few days, too many for a guy like Chris anyway who would be looking at us a bit annoyed to have caused such a fuss, and doubtless be willing us back out to the sea.
Farewell Chris James, we promise to keep up the adventure. 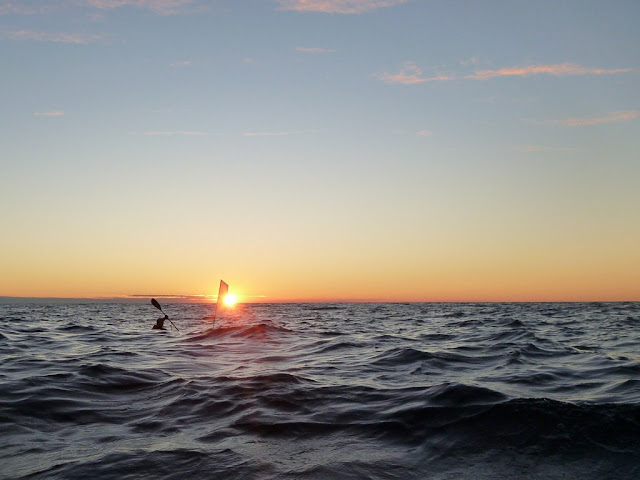 
Christmas Eve brought the promise of a lingering two metre longish period easterly swell, which was bound to kick up against an outgoing tide on one of our favourite play spots, the Bundeena Bar.
We decided to ditch the last minute shopping and head down with two boats we'd wanted to try out in just these conditions, fast enough for fun, but not crunching beach breaks. In other words, something we felt most sea paddlers could relate to, surf that wasn't intimidating but was still a helluva lot of fun.
The video is a small cut of what was laid on for us for the best part of two hours.
We swapped boats about half way through, running the long rides on offer, bouncing around in the whitewater and generally getting our heads around these two boats that were designed to excel in the surf.
Rob let his full suite of surf tricks loose, delighting in the ability of the Gemini to 'hit & run', timing a sweep with the first 'hit' from a broach to bring the buoyant little boat back on line and carry on. You'll see him doing it a few times if you watch closely.
The differences between them are palpable. The Gemini oozes buoyancy and edge control, but still accelerates wonderfully onto a wave. It lifts once planing and feels light & loose on the wave, encouraging you to have a crack at things you wouldn't normally do in a sea kayak on a wave.

The Xcite runs faster, in fact the waves probably weren't fast enough to cut it completely loose, and tracks hard on the wave with a lot more dependence on strokes for control. When you consider how good the Xcite is in open water, both zipping downwind and bouncing around at close quarters, it's a very well credentialed day & play machine.
They are both supremely reassuring in the rough, not for a moment did I get tripped up by either and I'm a bit rusty surfing a sea kayak. Rob's boogles were self inflicted, pushing the envelope to unlock the little gems hidden in the hull shapes.
Of course this was all done in the name of market research, a tough job that we wouldn't wish on our worst enemy....
at December 27, 2012 1 comment:

The Simplicity of a Summer Nor' Easter


My paddling waters around Sydney are blessed each summer with a mostly predictable & cooling sea breeze from the North east. The hotter the day, the earlier it kicks in and the stronger it blows, but as it is a localised breeze, it has generally blown itself out by early evening.
Last summer with the La Nina weather event that dominated Australia's east cost, the Nor' Easters became a rarity as our weather seemed to come from the moist, cool, south. For Rob, Chris & I waiting patiently for a decent northerly to propel us on our One Degree South Paddle, it was a frustrating time, relieved only by a half-arsed wind that finally blew in late March.
Despite some flukey weather this spring, the warm days have started to return with consistency and with them, thankfully, our cooling Nor' easterly.
I have had a bizarre couple of weeks, suffering from some nerve damage in my left leg after a nasty electric shock from a Coffin Ray.

The Coffin or Numb Ray (pic courtesy http://www.underwatersydney.org)
It's made my left leg spasm, affecting my lower back and generally turning me into a half bent over grumpy bugger. I've tried a few massage remedies, but my chiro reckons it will just go away eventually and to stop being such a big tunsa.
I've soldiered on, having a few paddles on the quirky Zegul Rhapsody SUP we were sent to test, and on Sunday I swapped the lawn mowing (back too sore or course) for a paddle & took my V10 Sport out off Cronulla for some downwind therapy.
I slogged out to sea about 5km straight into the teeth of a Nor' Easter that was building, then turned and ran blissfully all the way back into Port Hacking.
It was brilliant; warm water, a postcard Sydney summer's day, and waves and wind that coasted along beside me propelling me along at an exhilarating speed, linking run after run with a quick edge or stern draw.
All I want for Xmas are some strong winds, steep following seas & blue skies….and for the electric fish to leave me alone.
at December 14, 2012 2 comments:

Our second Tiderace container lands tomorrow, only a matter of weeks after the first one, such has been the demand for these cutting edge new designs.
We've added the Tiderace Xcape to the range, a sympathetic rough water expedition boat that slots in amongst the genre typified by the Valley Etain series.

It brings our range up to five designs, with the sixth addition, the much awaited Pace 17 Tour arriving in our third shipment, due in mid January.

Only 35 more sleeps - the Pace Tour 17
Unfortunately there is only one Pace 18 remaining in the shipment that isn't pre-sold, so please get in fast if you have your eye on one, as there are none available in the shipment landing in January, and we're unlikely to have any more until late Autumn.
We also have the full range of colours back in stock on the Xcite, for those who have been enquiring about colour range.
Check out our Kayak Stock & Prices page for details on colours & availability, and the Tiderace page on our website for the full specs & details.
at December 12, 2012 No comments:

Our next shipment from Valley is being finalised this week.
If you'd like a customised Valley boat made to your specs, colours, maybe with a clear Carbon Kevlar hull, or if you're planning on paddling overseas & would like a boat made in the robust 3-piece construction, please let us know before Friday.
The shipment is likely to land around the end of February.
at December 11, 2012 No comments:


Our first shipment of the all new Lendal X-Range Paddles, arrives this week from the US.

We have stocked the most modern Lendal design, the Kinetik Tour, a dynamic flat blade designed for responsive rough water performance and a clean exit. We chose this design initially because it's one with which we are most familiar,  with characteristic down-tilted geometry producing initial power, which aids when manoeuvring the kayak in rock gardens, surf and sea caves. It's Lendal’s best selling paddle and rewards good technique, with palpable performance.
They paddles are in the two piece configuration.

The shafts we've landed are the carbon flex style, light, rigid but without the shoulder tendon-twanging stiffness of a full carbon shaft, important for sea kayakers paddling long distances.
The paddles feature infinite feather adjustment, and we have shaft lengths ranging for 204cm up to 214cm.
You can order Lendal paddles now through our online store, $549 including national overnight delivery - just in time for Xmas!
at December 06, 2012 2 comments: