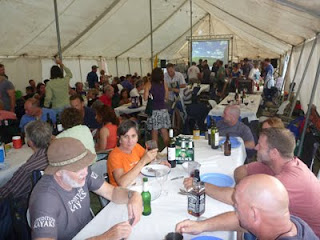 Tomorrow marks another year for the NSWSKC, celebrated at the Annual General Meeting at Bundeena. We'll be down at the event from early tomorrow morning with boats for members who are coming along without a boat, and others to demo on the bunch of club trips heading in the morning, before the formal proceedings of the afternoon.
The details are HERE.
at July 30, 2010 No comments:

Emerging from a taxing couple of months of home inspections, selling a house, buying a house, the usual work/life pressures and a cool Sydney winter, I've finally settled the family into a temporary holiday house in the bayside suburb of Kurnell. With eight weeks to kill until our new house is vacant, I figured a home on the water would be fun for a short spell before we go back to the 'burbs for the next twenty years...
My office in Marrickville is about a 900m stroll from the Cooks River, which feeds out into Botany Bay. From the beach at Kurnell, about 11km down the line, it's another 200m to our house, so I have committed to paddling to & from work two or three times a week. I reckon 'what the hell, who ever gets the chance to do that...?'
First job was to rig up the Rapier 20 with some lights, and then set the camera to record the maiden voyage. It wouldn't be much fun with a 20kg+ boat so I put an old set of wheels on the Rapier, which weighs in at about 15kg, and off I went. 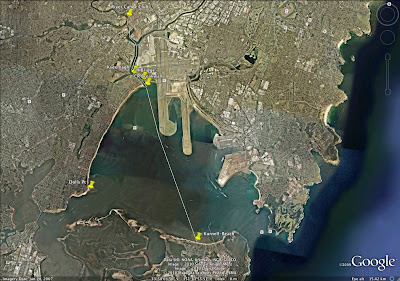 I'm sure the sight of a man in fitted black rubber clothing wandering through industrial Marrickville with a long black phallic canoe would have had some of the locals looking twice. It might just provide some inspiration for a new Mardi Gras float. A float that floats...?
My put in spot at the Cooks River is, umm, interesting. It's a river making a bit of a comeback after a century as the default dumping ground for inner Sydney's now defunct heavy industry, but it still has some serious aesthetic issues. The banks are revegetating, the fishermen are back & as you progress downstream the birds are active & numerous, but I still wouldn't fancy a swim. The black goop on the banks & the deep silty brown (Sweet Georgia Brown?) water don't exactly take me back to the foothills of the Patagonian Andes.
But, it's a waterway to the sea, and my highway home, so it has to do...!
Heading down the river you pass the airport, then out onto Botany Bay itself. After seven years living alongside Botany Bay I've come to appreciate it for the unique place it is. It's full on working port, with the biggest airport in the region, a desalination plant pipeline bolted along it's keel line, yet it retains pristine mangroves on the southern shore, lovely white sandy beaches from Kyeemagh to Dolls Point, and features a National Park on it's northern & southern headlands. I've paddled it most weeks either on my fitness paddle along the western shore, or out to sea from La Perouse, and using just the past year as a snapshot have seen everything from a mirror calm lagoon to a seven metre wave, in a series of four metre swells off the lighthouse at Henry Head. I've paddled calm water, surf off Dolls Pt (5km inland of the heads), rough bastard headwinds & had stupendous 20kmh+ blasts downwind in my surf ski, as well as smashing myself up on the rocks behind Bare Island, all in this essentially enclosed area called Botany Bay.
Paddling out into the bay in the fading light there were commercial dive boats heading home, trawlers making their way in from a day offshore, and the usual assortment of tinnies & punters hauling lines after a calm day's recreational fishing.
From the tip of the southern runway I carved a line across to Kurnell (or Far Kurnell to the locals), a place proudly announced on a beaten up sign as 'the birthplace of modern Australia'. It's a moniker laced with irony, when you could reasonably argue that it also represents the staging post of the beginning of the end for ancient Australia.
I could make out the long finger wharves which transport the petrochemicals from the Caltex Refinery to the tanker ships, and as I got closer in the dusk light the  refinery started to light up like a celestial city of linear halogens.
Pushing through the last few metres I checked the GPS, showing 11.3km, covered in about an hour & a quarter. A spectacular & varied paddle which on it's day will doubtless present some good sea conditions, but which for Tuesday's inaugural 'Paddle Home' presented a gentle & relaxing cruise....with a bit of man-hauling...
at July 29, 2010 No comments: 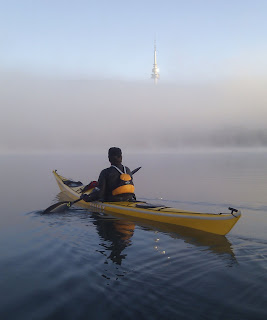 ACT paddler Marty Holden sent this photo through this morning of what looks to me like an impending alien mothership about to devour Canberra, and Marty in his Nordkapp LV. I guess this would save us the anguish of another election campaign...
Marty writes:
"We were out paddling on Lake Burley Griffin on Sunday morning in a nice cool temperature of -4 degrees.
The temperature was pretty normal for Canberra, but the fog was a complete pea souper – to the extent that we literally got lost 3 times within an hour.
However for a brief 5 minutes a small patch of fog cleared and we were able to take the attached photo whilst admiring Black Mountain."
It's some photo, probably one of the best kayaking pics I've seen, the photographer is Justin Channells, thanks Marty for sending it in.
at July 22, 2010 No comments: 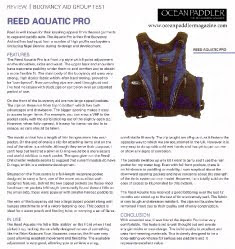 The esteemed sea kayaking magazine in the UK, Ocean Paddler, has reviewed our Reed PFD. You can see the review HERE.
It's a comprehensive review & we concur with their findings, that this is a well priced, very well thought out piece of kit, made to last & fitted with enough features to enhance, rather than detract, from the performance of the unit in the sea.
We are very lucky at EK to have our 'canary in the coal mine' in the form of Rob Mercer, who wears & uses all of our Reed gear, 6 days a week on full days paddling & instructing. This gives us a great insight into the wear & tear on our products, the likelihood of their failure, where they'll go if they do, and as a consequence what advice to give our customers on care & maintenance.
A month of paddling for Rob equates to more than a year of water time for me, and I dare say the majority of paddlers out there, so we are very confident of the capabilities of our gear. It's part of the reason we offer so little choice - if we don't think something cuts the mustard we don't put our reputations behind it.
We have good stock of the Reed PFD, available nationally including freight to your door for $219.00.
You can subscribe to Ocean Paddler, the world's best sea kayaking mag, at www.oceanpaddlermagazine.com
at July 15, 2010 No comments:

Bobby Barter - Behind the Green Door. 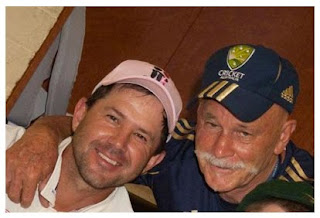 Forgive me a short interlude from paddling to plug a book written by of one of my old cricket mates, Bobby Barter's 'Behind the Green Door'.
In my days playing cricket for Randwick, as if getting into first grade wasn't incentive enough, the cream on the cake was having Bobby as the manager/dressing room attendant/advisor on life/tipster and all round champion bloke. When I retired & took up paddling he wrote a poem about me in the Hawkesbury Classic, carefully weaving in what were then my world-class abilities in what the French call 'la troisième demi', the name of my first boat (Che Guevara) & the fact that I had a Cockatiel called Frank Bunce. I told him then & there his talents would take him to the top of the bestsellers list!
When Bob was in charge, you'd walk into the sheds at the start of the day and a whole table would be set up with fruit, energy drinks, tape for those niggling injuries, a water bottle with your name on it and any number of other little touches to make the day go easier. Even though it was only ever semi professional at that level, you felt like you were at Lords, or... the SCG, rather than Coogee Oval.... 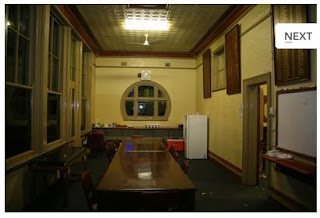 When Simon Katich arrived at Randwick Petersham (as the club became after merging with nearby Petersham), the legend of Bob's dressing room excellence had grown to epic proportions, and in 2004 he was offered the job of 'roomie' at the hallowed dressing room at the SCG. 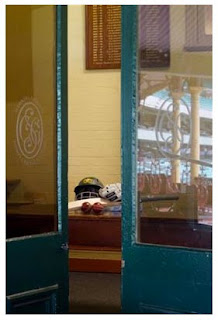 Bob has spent the last 6 years watching some of the great moments in cricket from the inner circle, and has written a book about his experiences. It's not your normal stats loaded, sport centric cricket book, but rather a fly on the wall account by a guy who is clearly held in the highest esteem by the players we all know as household names. It's a great read even for those not interested in sport in general, and will be available from Bob's website www.scggreendoor.com shortly.
at July 12, 2010 No comments: