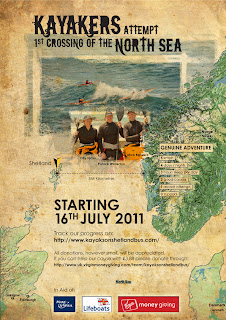 Another fantastic expedition starts Friday, when Mick Berwick, Olly Hicks & Patrick Winterton attempt to emulate the Norweigan fisherman who operated the fabled 'Shetland Bus' route throughout WWII. The guys are attempting to paddle the 388km between Scotland & Norway, with three no doubt very cold & uncomfortable nights spent out at sea in the process.
Our mates at Reed Chillcheater have made the team a cockpit tent each (below) which should protect them from the elements when they raft up for a kip. It makes me glad that we're in nearly-tropical Queensland on our expedition, as I contemplate a night out in the deep dark cold North Sea. 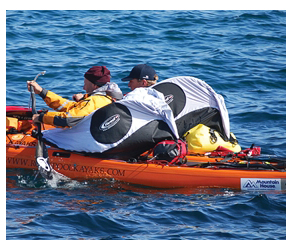 As he has for our North Reef trip, our very own Mick MacRobb  from Flat Earth Sails has outfitted them with his brilliant sails. 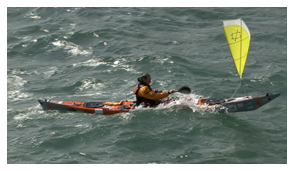 They're raising money for the local life boat service that does such a great job in the UK, & have a site set up with all of the info on their trip & a donation box HERE.
We wish the guys well on this epic trip. 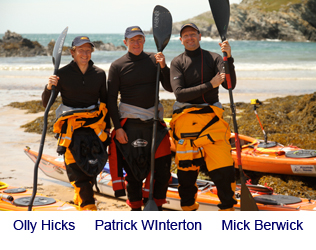 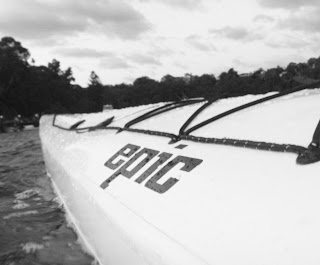 I remember seeing the first incarnation of the Epic 18X, the Endurance nearly 10 years ago at a club weekend & thinking, 'hey that's not a sea kayak!' The long waterline, seemingly rockerless profile, plumb racing bow & modern look evoked a racing design profile, not the rough water sea boat that I'd grown accustomed to as representing a sea kayak. 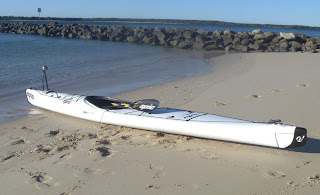 Epic have undergone a few changes over the years, and the brand new 18X is showing all the signs of being a huge improvement on what has come before. First of all, they had Freya Hoffmeister paddle a bog standard glass 18X two-thirds of the way around the country, completing the trip with one of the first of the new batch of the 18X at Broome, with the first casts of the features that have just gone into standard production. 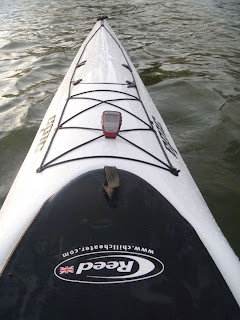 A 12 month varied expedition covering every single aspect of sea paddling has got to be a good testing ground, & Freya's experiences in her boats have given rise to a boat that is really a seriously good design.
One thing unmistakable was the speed of the Endurance, the guy paddling it was smoking us, & he was no hot shot.  The new version of the 18X has all of the renowned speed. A strong paddler won't hit the wall on flat water until well into the 11kmh zone. Last year's MREC Hawkesbury Classic winner, Toby Hogbin, blitzed the 111km in 9hrs 18 minutes, so the credentials for racing are well established.
What's new? First off, the 18X just looks different. The clunky build of old models, the telltale signs of mass factory output compared to quirky loving construction is gone. We've been selling Epic skis since they began production at their new facility & haven't had a single issue with regards structure or fittings, and this 18X has the same hallmarks of beautiful quality.
I've been paddling it now for a week or so & have had it plunging into head seas upside down rolling in breaking water & haven't seen the remotest sign of a leak. Their new hatch system is light, clever in it's closure system & dry… 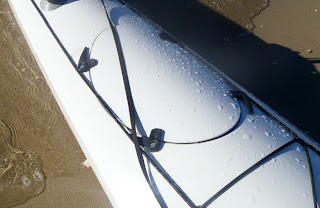 Bone dry hatches sealed with a clamped cross lever.
The day hatch is now standard, not a bunged on afterthought option for sea kayakers, rather the necessity for sea touring that we all know it to be. 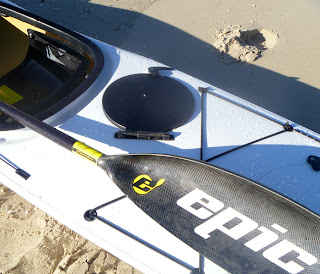 The carbon flush day hatch on a hinged fixture.
And then there is the new rudder system. I don't reckon the pure hull shape of the old Epic 18 was good enough to deal with steep following or quartering seas without a deeper draft rudder, which it didn't have. As a result It tended to skate around disconcertingly when things got steeper & you really did need to take care to angle on runners to avoid broaching too far to recover. 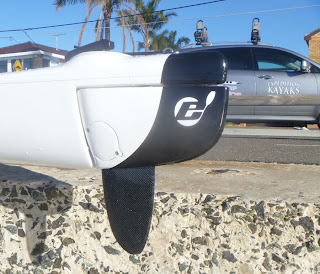 The revolutionary housed rudder - deployed
The new system, while not quite the 'holy grail' retractable underslung rudder, still manages to put the pivot point further forward, safely protected in a housing, and give great bite in following & quartering seas. Flat water paddlers can retract the blade & use the integrated rudder for calm water steering with less drag, while those of us who like a downwind blast now have a control system nearly as good as Epic's legendary surf skis. 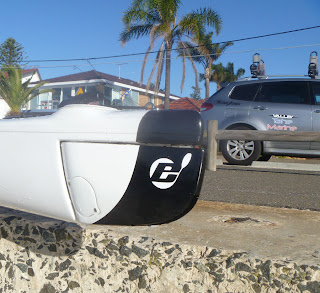 ….and safely tucked away.
With the rudder up, the ski also performs very nicely with the application or 'proper' kayaking strokes. Initiate a turn, drop your opposite edge, plant a careful bow draw & the boat will pirouette just the way a more traditional design does. Here's a short video illustrating the things you don't expect the 18X to do….

We think this fitness/tourer design is about to bloom as a very prolific boat style among sea kayakers. In some respects the Epic 18X has been ahead of it's time in leading the way towards the sorts of designs with good upper end speed & radical looks. Other designs have caught up & even surpassed the old Epic 18 as quality & design innovation have moved ahead in recent years, but this superb new incarnation has put the old pioneer back on the podium. We will have stock of the new Epic 18X from next month, selling with full features for under $4000.
at July 05, 2011 2 comments:

We have been testing a small range of products from the excellent North American safety & rescue specialists, NorthWater in recent weeks.

Of most interest to us is their Sea Tec Tow System, something that offers a similar level of functionality to the Valley Deck Mount System, but in a smaller & more versatile package. We're pleased to report that it performs well in the helter skelter of a tow at sea, & we're happy to put our stamp of approval on it for local paddlers.
Our stock has arrived & is now available through our online store, there is a fantastic explanation of the system does HERE.
We've also got some of the super cool Paddle Britches, a practical & quirky storage system for your spare paddle. 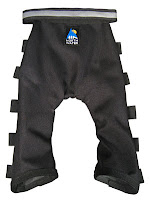 Last but not least, at least to start with, is the North Water Coiled Paddle Leash. It's a robust & beautifully finished piece of kit, for keeping your paddle tethered securely. 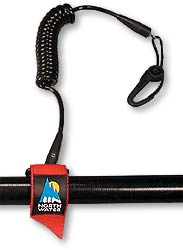 You can order all three products through our online store, for immediate delivery nationally, freight free.
at July 04, 2011 3 comments: