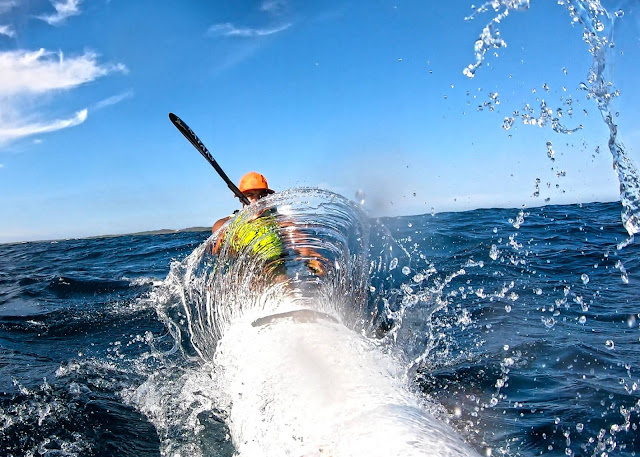 A year ago or so I took delivery of the first V10 Gen 3 to hit our shores, a throwback to some extent to the heavily ocean-oriented original V10 which so revolutionised ocean ski popularity.

After paddling it for a couple of weeks I wrote this short 'first impressions' review, the crux of which were neatly summarised in these two paragraphs:

"Well me for one, who has wished since the day it went away that I had kept the original V10. This is a nod to that first, great ski, no question. It feels the way the old one felt on waves, accelerates in a predictable and reassuring way, but without the 'rolliness' of the original. I think that's a reflection of the fact that skis in general have come a long way since then and most of us are no longer willing to put up with unnecessary instability as a sacrifice to performance.

V10 Sport owners have a very appealing and not-so-large step up to something that offers plenty more, in fact anyone out there paddling an intermediate ski well, should consider the new V10 as much smaller leap of faith towards elite skis, with a very real step up in performance."

A year on from those initial thoughts, I thought it was time to offer a more in-depth review of the ski, considering I've paddled it, certainly for my fun time on the water (as opposed to 'work' time), pretty much exclusively over that period.

My initial review was the target of many online queries, email, messages, questions from all over the world, as in this day & age the 'review' does seem to be something either loaded with commercial bias, or gushing & a bit useless. We sell lots of different skis from lots of different manufacturers, and don't have any real interest in pushing one over the other, so take these thoughts as they're intended, coming from an average ocean paddler with little interest in flat water performance & racing, who just likes to get out & crack a few runners.
My appreciation of any ocean ski is clouded by one very simple overarching quality, is it predictable when things go big & get confused? Some skis are great when everything lines up, but can be a handful when, as inevitably happens around a cliff featured coast like ours in Sydney, the waves start bouncing back at you. It's the reason I don't go near the very elite boats like the V12 & V14, because the moments of joy when you finally crack that amazing run & realise just why these things are elite skis, is interspersed with too much uncertainty about how the boat will react to an unexpected side wash.

The V10 is really, really predictable on the sea. I haven't found myself backing off, setting up that 'maybe' brace as I suspiciously eye a wave shape that just might push me a bad way, once. That's not to say it's dead stable (like the Gen2 V10 for example), because the higher seating position lets the hull roll under you until the substantial secondary stability kicks in & restores order, but the transitions in the hull are predictable and allow you to stay aggressive.
The seating position itself, like the new V12, is a big improvement on previous Epic models, which I always felt allowed you too much sideways 'arse' leeway. Your knees are pulled in tighter, the seat feels snug, and without ever measuring it the bucket feels well up above your feet.

The most striking characteristic of the hull, maybe in concert with the rudder, is the tracking when you turn diagonally on a wave. I've never paddled a ski that holds a traversing line better. Those familiar with that feeling as you angle towards a hole & get more & more acute until you broach-turn up & over the wave will be pleasantly surprised at just what a hard line this ski holds in that situation. It means you can be quite outrageous in your direction changes without fearing a big broach. 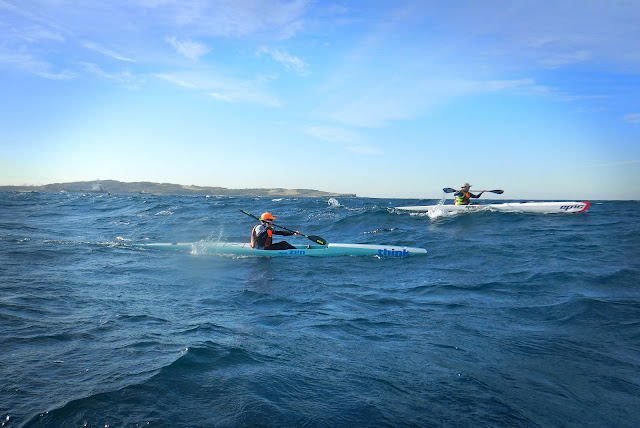 Ocean speed is hard to measure, & frankly I don't usually bother, but the brilliant Capes Run we regularly paddle off southern Sydney features an 11km downwind section that I've never done faster, or in more control than I have in the V10. I recorded one run a few weeks back in red-letter conditions & averaged over 15kmh for the downwind, which for mug-punter me is pretty damn fast. We had perfect wave shapes, and I would have been fast on most anything, but it was effortless speed. If you measure ocean speed by the amount of effort you put in to catch & stay on a run, then this has plenty for someone like me who isn't good enough to keep attacking on the elite skis.

Our demo is the ultra, red nosed layup, it weights 10.7kg, well below spec, and considering the trashing I've given it & our customers using it to demo paddle it's in great shape. Epic skis are really very well made nowadays. 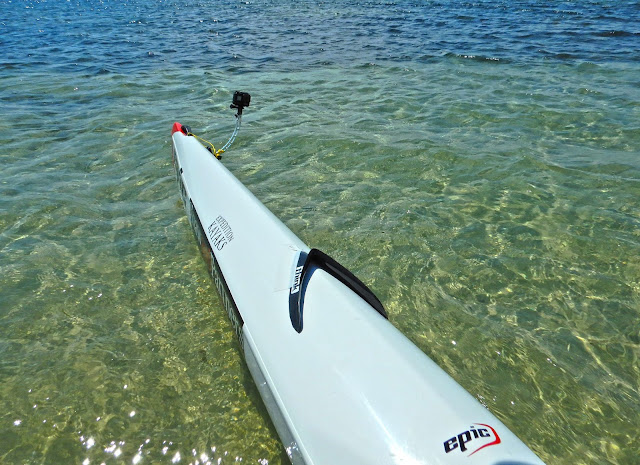 Who should be looking and at this boat? The obvious one is the V10 Sport owner who is tearing the arse out of it, and looking to move up a grade. It is kinda like I'd imagine a V12 Sport would be. The less obvious buyer is that person we all know, the one who loves the idea of a true elite ski, but try as they might just can't stay on top of things on the sea. They struggle to resolve the 'I've got to keep up with Macca on the flat sessions' with the 'bloody hell this thing makes me nervous in the bumps' conundrum. As a 'coming-back-from-a-poorly-chosen-elite-ski' design, it presents a much less complicated ocean ride, without giving away very much at all to the rapiers of the sea. We've had people come in here & rush down to the local river to check the speed over their 5km time trial course and come back devastated that it was 7 seconds slower than their V12/V14/you-name-it, but frankly this ain't the ride for them; it's quick enough, but it was designed for waves.

If I had to characterise it in a sentence, I'd say it's a ski that allows you to catch and manoeuvre onto runs on the ocean with less effort than an intermediate design, without the anxiety of an elite ski.

I've thoroughly enjoyed paddling our demo V10 in conditions ranging from a little bit of batsh*t boring flat water to a lot of bustling, bouncy downwind, and consider it to be one of the very best surf skis released in the past 5 or 6 years. If you're a competent (but not quite heroic) ocean paddler, and get a chance to give one a go in some waves (as opposed to paddling it around in circles on a river), I'm sure you'll be surprised at just how good it is. We have our demo here and would love to take you out for a paddle!