After two solid years of R&D, we can finally announce a series of successful sea trials of our new foiling sea kayak rudder, The Velocimiser.

Whilst only so far tested on the Audax, a fast and slippery hull that is easy enough to get up to foiling speed, we do believe it has the potential to revolutionise range in conventionally shaped sea kayaks.

Based around the same principles of 'wing style lift' from ancient Greenland paddles, we've developed a shape that we think even the Inuit would find pleasing, especially when they discovered they could suddenly chase after Narwhals at high speed. 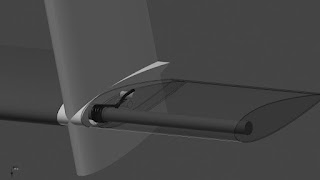 Fitted with an electronic pitch adjuster, you can make your foil lift early and simulate a downwind, down-wave run where none exists (as your stern lifts majestically from the water), or for the traditionalists, you can do the opposite and create your own hard core headwind, minus the wind. Switch to headwind mode and you'll instantly be in grinding misery, rejoicing in the manliness of the struggle, whilst all around will be oblivious to how hard you've made things for yourself.For now it's only available on our range of sea kayaks, the Audax, Azure, Aurora and Nadgee Solo, but we will be offering an adapter kit in coming months so you can get foiling too.

Keep an eye on our Facebook page for updates and further scintillating foiling footage.