Jaime Sharpe is a NZ paddler & adventurer currently attempting to paddle the east coast of his homeland from Cape Reinga in the north to Bluff in the south. Interestingly, he's doing the first leg of his trip in a TRAK T1600 folding kayak. 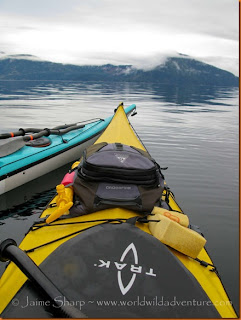 Image Jaime Sharpe
Having paddled the TRAK a fair bit over the past year I have wondered about it's application to a serious trip, & Jaime is out there doing it in good style, from the reports in his blog.
You can follow his trip on his excellent website, Kayak Downuder NZ 2011.
at November 24, 2010 No comments: 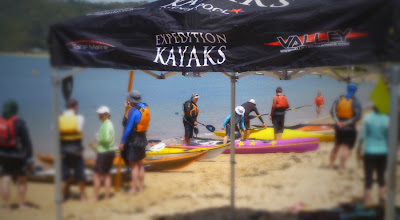 We have had a close association with the keen bunch of paddlers known as the Hunter Kayak Klan, since they formed a couple of years ago. Last year we attended their inaugural Klancopia event at Umina, essentially a training & development weekend aimed at raising the level of skills among the Klan members who aim eventually to do their paddling on the sea, in safety. It was a great success & a lot of fun, so we looked forward to catching up with our mates from the Klan this year at the same venue.
This year we added in an assessment on the Friday through Rob Mercer's Balanced Boater for any of the members Klanners hoping to have a shot at their AC Sea Skills award, and Campbell Tiley & Owen Walton stepped up to the plate on a pretty testing afternoon to do their thang.
The forecast southerly had blasted through in the early hours of Friday & whipped up a solid 2m sea, and winds remained on or about the 20 knot mark for the duration of the assessment. We remarked later that it wasn't Rob doing the assessing on this day, it was the sea. 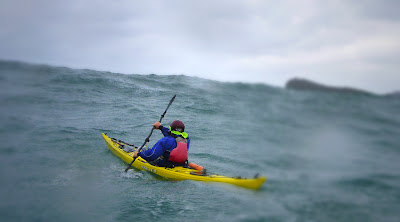 Owen Walton riding up the southerly swell
Owen & Campbell ran through the gamut of skills that are required to pass the mark, including rolling, re-entering & rolling, performing rescues & showing good boat handling in the demanding conditions. The highlight was during Campbells rescue of Owen, when a fat ocean wave broke clean on Campbell & sent him reeling back 20m upside down. 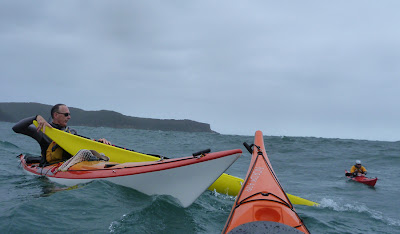 Campbell rescuing Owen, just before the crunch. Bruce in the background watching the wave roll in...
We watched waiting for him to pop the coaming & float free as he wasn't holding his paddle when the wave broke, but he had the presence of mind while upside down to feel for his paddle leash, haul the paddle back into his grip & do a nice roll recovery. 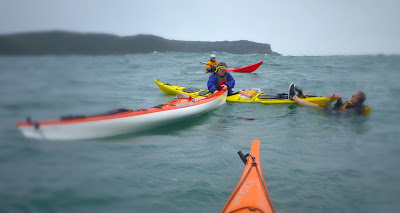 Owen performing his rescue on Campbell
Owen asked what he would have to do if that was what the other candidate was capable of! On the paddle back I reminded Campbell that it was at this event last year when he first had an explanation & a short lesson on rolling, & here he was in the middle of some very real conditions, doing it for real. It shows you what some dedication & practice can achieve.

Owen running down the back of a wave
Bruce McNaughton helped us out on the water, & by the time we got back into the beach every member except Rob had managed an unplanned roll. Mine was a capsize on a runner after I got cocky & drove my edge too hard & ended up doing a 40m 'face brace'.

Riding the swell, just before the face brace
After a brief rest we then hit a good sized surf break to put the guys through the surf phase of their assessment, & both passed with a competent display of support strokes, boat control & rolling under fire. Owen in particular copped a real cruncher, & managed to hold it together all the way in, much to the delight of the crowd on the beach.
It's easy to forget that Owen is a gent well into his sixties. Watching this determined bugger get his sea skills in the conditions we encountered was one of the highlights of my paddling days, well done Captain Grumpy! 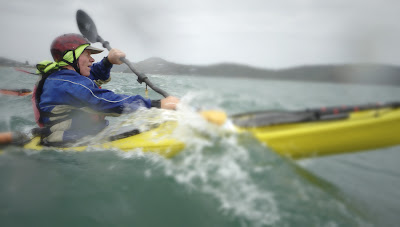 Owen punching out on his way to his Sea Skills award
After a gourmet meal on the Friday night at 'Hotel Patonga' (note, it's NOT called the Patonga Hotel), we assembled on the beach for Saturday's skills sessions. I had Chris James helping me out, after he took the opportunity to rocket up the coast from Neilsen Park on Friday arvo, covering 55km in about five & a half hours in his Aquanaut on the back of the southerly. 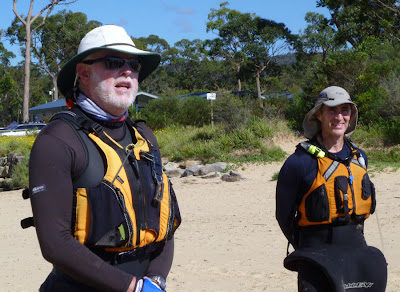 Rob & Chris James give the Saturday briefing
We spent the whole day working on stroke blending, incorporating our core strength into our strokes, & some innovative drills on supports strokes & bracing. On the whole it was a lot of fun & 13 tired paddlers hit the showers with sore guts! 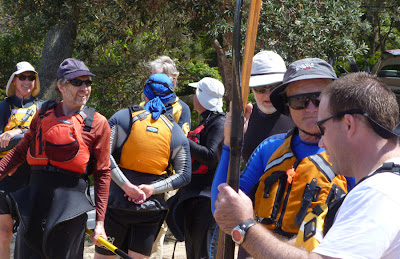 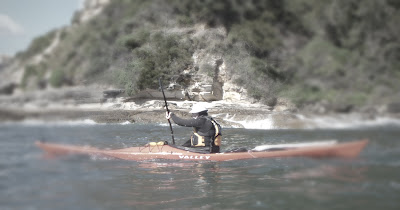 Bruce McNaughton in classic form
Saturday night featured the now mandatory beer & pizza, and Sunday dawned bright & sunny for our demo day, which we shifted across to Patonga. This was the first sighting en masse of the Rockpool Taran, the Epic V8 & the Zegul 520, and also the first opportunity in NSW for anyone to paddle the entire range of Tahe Marine boats in one spot. 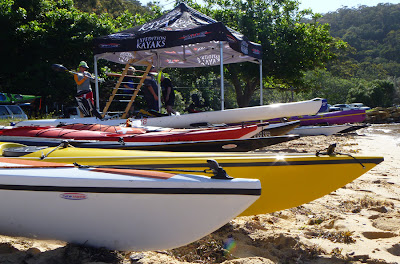 As with all of our demo days, everyone had a smile on the dial as they swapped & compared, rocked & rolled, & generaly mucked about in boats.

Camp EK
Thanks to the Klan for another great weekend, congrats to Owen & Campbell on attaining their sea skills awards, & here's to a bigger & more comprehensive Klancopia in 2011. Thanks to Sharon for making my lunch & making the weekend so easy for Rob & I, what a lady….
at November 23, 2010 1 comment:


With such a stable, kayak like performance, we wondered if it was possible to roll the Epic V8 Ski at a recent demo day.
With the help of a well-placed tie down & a Mitchell Horizon Greenland paddle, Rob Mercer showed just how easy it was….
at November 22, 2010 2 comments: 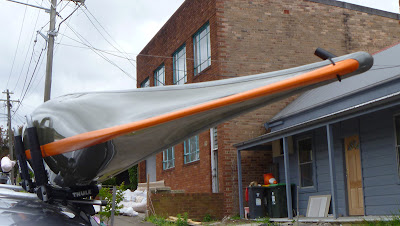 Just a final reminder folks that the last day for a customised Valley or Rockpool kayak, due here at the end of January, is Wednesday. Space in the next shipment is limited due to a huge response to paddlers wanting their next boat made to order, so please give Rob or myself a call if you want yours included.
at November 01, 2010 No comments: