After two years of prototyping, testing, more prototyping, more testing, and then finally the nuts & bolts of getting the mould made to the high standard we expect, we are proud & excited to announce the launch of our own locally manufactured sea kayak, the Audax.

Inspired by the Striped Marlin whose Latin name is Kajikia Audax, Audax is a Latin word usually used to denote bold, daring or adventurous. We wanted to produce a kayak that reflected this spirit of adventure in wide range of coastal and open water environments.

Our aim was to start with stability, the absolute most important aspect of any craft in which you may one day have to sort out a very serious problem on a heaving sea by yourself, we then expanded our design brief to incorporate the elements that we hoped would bring a smile to the dial of our customers. Namely the overarching requirement to get ground, to be an efficient and fast hull which has the capacity to turn that 50km crossing from a ten hour epic, into a six hour hoot. And of course the capacity to manoeuvre, not simply for the pure safety margin that a boat with good close-quartering manners provides, but also for the joy of the craft of kayaking. 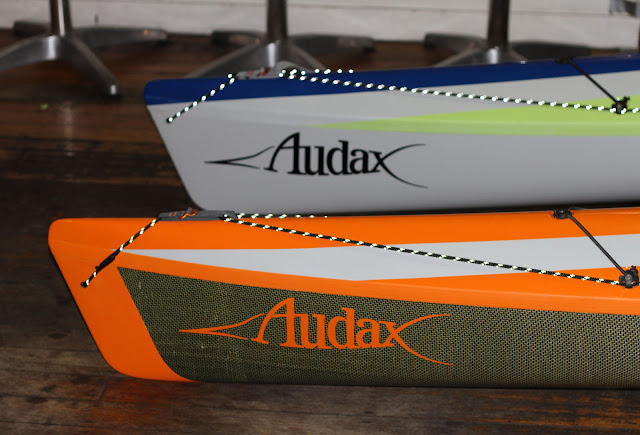 The Audax is a long waterline, open water kayak built to join the growing ranks of plumb bow fast tourers that have proven so successful and popular in Australian conditions.For decades now the local market for sea kayaks has coexisted with the ocean racing ski market and so the arrival of leaders in this niche such as the Rockpool Taran and Pace Tour appeared to many of us as an obvious progression for kayak design. These shapes probably appeared less radical to Aussie kayakers accustomed to sharing the coastline with surfskis. 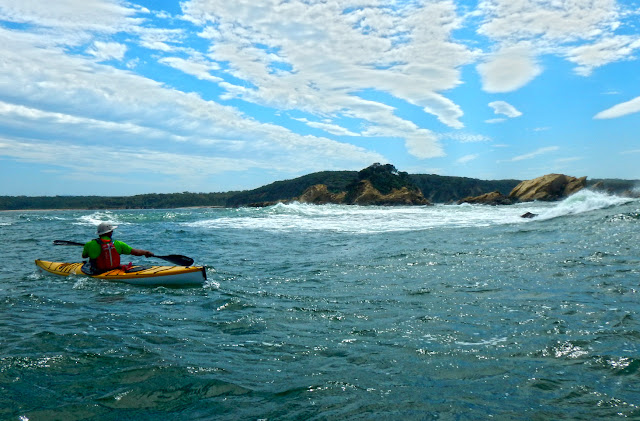 Our aim with this kayak was not to replace other plumb bow designs in our range, but instead to add another kayak that would appeal to those who are looking for an efficient modern touring boat with enhanced stability and maneuverability. The fact that the kayak is built in Australia will no doubt also appeal to many as it offers support to local small businesses and also provides new levels of flexibility for customisation.

The final hull shape was the result of repeated prototype testing across a range of conditions and paddlers, over a period spanning just over two years. We aimed for an efficient hull that was easy to drive at cruising speeds but still accelerated well to catch runners, but we also wanted the boat to turn well at all quarters to the wind and above all to have predictable stability in conditions both rough & smooth.

The best of the plumb bow kayak designs have proven themselves to be highly capable and sea worthy craft for everything from easy cruising to long distance expeditions so we felt no hesitation in using this shape for the Audax. We added a little rake at the bow to make the boat easier to slide off the beach when launching and maintained the upswept sheer line synonymous with our favourite classic kayaks.

From an ergonomic point of the view, the deck is quite steeply angled forward of the cockpit to allow an upright stroke. The cockpit is wide between the thigh braces so most paddlers can paddle “knees up” or “knees under” as required and the deck is high enough to allow for a comfortable bend at the knee in either position. 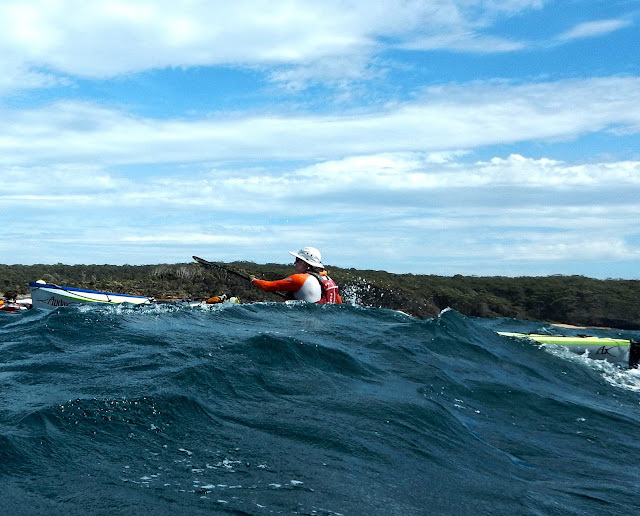 Audax kayaks use our “Bigfoot” footplate system, an adjustable composite seat and foam back-band. Other seat options include the Winkworth foam seat or the famous Gurney Gears Bumfortable (to order). 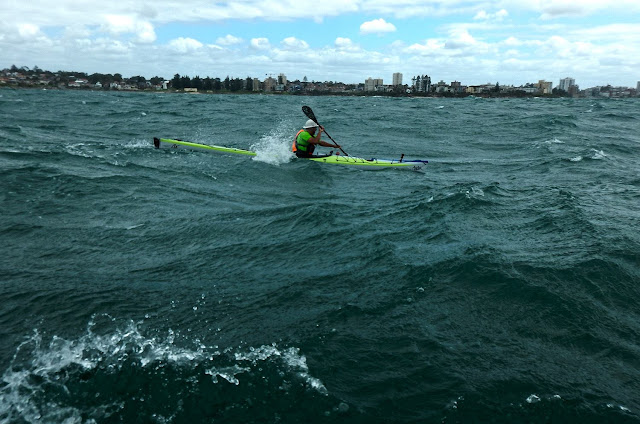 We have enjoyed the challenge of bringing this project to fruition after a couple of years of development and are delighted with the Audax’s performance and build quality. We hope you enjoy paddling it as much as we do. 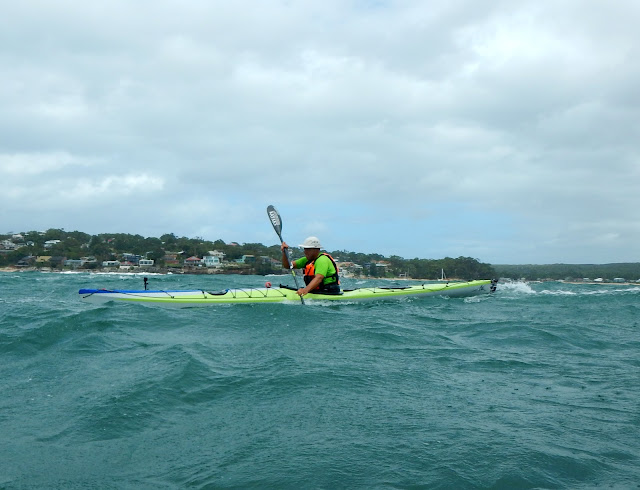 The Audax is available in three layups, which you can se in detail on the Audax page of our website (www.expeditionkayaks.com). 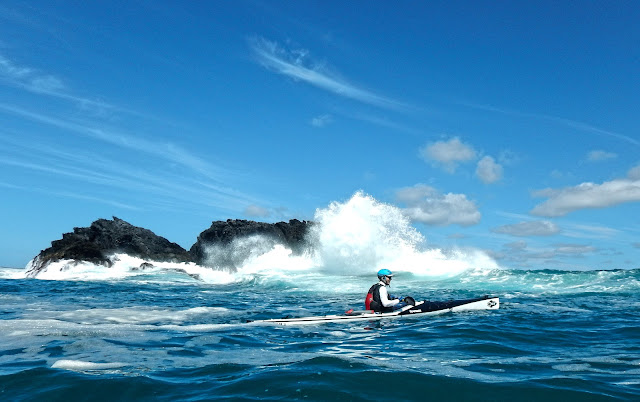 Each year in March the NSW Sea Kayak Club convenes at a spot along the coast to mark their one big event of the year, the Rock & Roll weekend.
As a sponsor of the event since 2007 when we began to be, it's a rare chance for us to get along to a weekend where near enough to 150 dead-set sea kayakers are in attendance, with the overriding goal of going for a paddle on the ocean. We enjoy the opportunity to put something back into the community of which we have been a part for so many years.
This year the weather gods smiled, slotting Rock & Roll in between an East Coast Low that closed out most of the NSW coast in thew week prior, and monsoonal rain event that subsequently soaked it silly. We had some big residual groundswell on the Saturday & a building sea breeze both days, but the protected launch spot at Batehaven meant that the getting out bit was mostly achieved without incident.
Friday night kicks off with the Beer & Pizza Party, our major contribution to the weekend, and partygoers trucked their way through an astonishing number of pizzas in an even more astonishingly short time. I think everyone must starve themselves on the way to the bay, in anticipation of the frenzy....
My Saturday trip was pencilled in as a trip out to the spectacular Tollgate Islands & back, but my group got out there so fast we decided to head over to the diminutive outcrop further south known as Black Rock as well. The big swells kept us well clear of the close-quartering mischief we have enjoyed at previous Rock & Rolls, but provided their own dramatic backdrop as we rolled over some very impressive walls of water.
It was also incredibly sharky, as many as five toothy friends spotted weaving in & out of our pod over the course of the morning. I spotted a big Mako, as well as a small Hammerhead & (we reckon) his Mum, curious majestic animals cruising by for a look at our strange craft. I love seeing sharks out on the open water, it tells me all is well with the ocean.
We were lucky to have Ken Bellette along with us, a surf lifesaving legend in the area who is getting back into sea kayaking, and he navigated some judicious lines around lurking bomboras as well as being a general tour guide to the features & history of this beautiful waterway.
On the Saturday arvo I took the double ski down to the beach & pulled a few unsuspecting RnR'ers off the beach for a go in the little sea that had developed next to Snapper Island. For entertainment, it was 10/10, especially my favourite paddler of all time, who I think was actually trying to jump out of the ski on one big run we cracked!
Rob ran his brilliant rescue challenge in the arvo, with a big cast of participants, and as always it was really well received. The winners were spotted improvising a hand-paddle home to take the yellow jersey!
On Saturday night we were treated to a talk from Sandy Robson, doing her best to fit a five year Germany to Australia sojourn into an hour long presentation. Raffles run & a buffet banquet put away, there were some very weary bones dragging themselves off to their tents for the night.
Again with Ken giving us the local weather and local knowledge, we decided all would be right to run a downwind paddle from South Durras to Bateman's Bay.
Launching from the protected boat ramp at Durras we paddled out past the break & swung south, for an hour of the cleanest, steepest little runners you'd ever hope to paddle.


The group paddled with tremendous cohesion, the fast guys blasting through & waiting, the slower paddlers using the seas for a cruisy ride  back to Bateman's, always within shouting distance over the entire 16km journey.
On Sunday arvo Rob ran his paddle workshop, which curiously seems to always finish with about twice the number of participants start. In the evening the famous Pogies are contested, the short film festival for sea kayakers with more than it's fair share of controversy & high drama over the years. This year the quality of entries were just brilliant, like watching the Discovery Channel (!), but I think everyone agreed that Mark, Roddy & Davlin's Bass Strait video was a worthy winner (the link to the video is HERE).
Rob, Sharon & I came into this year's Rock & Roll with an extra incentive, and no small amount of trepidation, as it was our first chance for mass engagement for our new boat design, the Audax. Whilst we're very confident we've come up with a design that has wide appeal as well as high performance, nevertheless over the weekend we listened intently to the 40+ paddlers who gave our demo boats a thorough workout, mostly in pretty lively conditions.
The feedback was very reassuring, the speed and acceleration was evident & I guess people figure is a given, but the rave reviews were for the stability and the manoeuvrability. I have noticed people looking at fast plumb bow boats since they became popular with some suspicion, prejudging them to be too unstable, 'something that looks that fast must be hard to paddle', and there have been events we've been to over the years where they've barely even been tried. The Audax seems to have generated a lot of interest however, and paddlers were queueing up for a go, and almost universally coming back to us with a cheerful tale affirming how easy the boat is to paddle.
The Rock & Roll weekend was organised by Simon Swift, ably supported by his man on the ground at Bateman's, Neil Gow, along with Selim, Phil & a bunch of others silently making the cogs turn. They did a hell of a job, numbers were up, the organisation was seamless, and you almost got tired of seeing people throwing their heads back & having a laugh, sharing their combined passion for this wonderful sport of ours.

We extend a hearty thanks to these guys, as well as to our club mates who stopped by to say G'day & swap a yarn or two. If you haven't managed to get along to a Rock & Roll weekend, and you're a sea kayaker anywhere, let alone in our coastal waters, you don't know what you're missing.