Latest Shipment from the UK 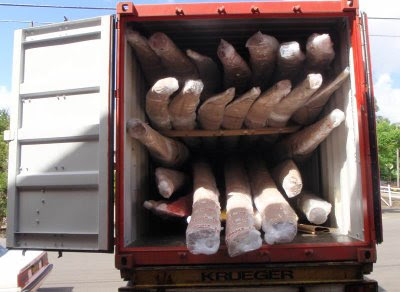 Our latest shipment has arrived!
The much anticipated Rockpool GT will make it’s debut on the water on this coming week, and there are two only remaining in stock. We’ve also got stock on the shelf of the traditional Greenland boat, the Anas Acuta, the exceptional new double from North Shore, the Atlantic II, and the world’s fastest sea kayak, the Valley Rapier 20. There is good stock of the highly regarded Valley RM range, the performance day boats to compliment your high volume expedition kayak.
Traditionally our new arrivals last days, rather than weeks, so be quick if you want to arrange a test paddle of a shiny new British sea kayak.
We will be closing off custom orders for our next shipment, due in November, on August 21.
If you’d like a Valley, Rockpool or North Shore boat made exactly to your colour & layup specs, ready to paddle in the coming summer, please let us know prior to August 21.
at July 30, 2009 No comments: 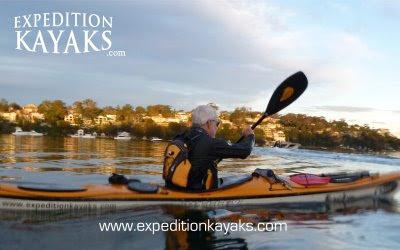 We've posted a slideshow with some images from a few of Rob's paddles around Sydney over the winter so far. It's a reasonable file size, so please be patient with the download.
at July 14, 2009 2 comments: 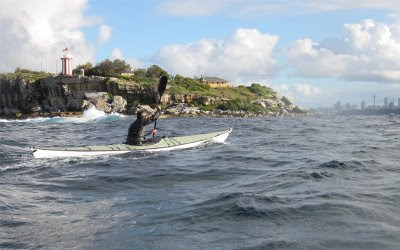 Our very first demo paddler for the TRAK T-1600 was accomplished local paddler Chris James. Chris is a skilled & versatile kayaker, with extensive experience in surf ski, adventure racing & sea kayaking, where he holds an Australian Canoeing Sea Guide qualification.
He's also a busy guy, running the superb Neilsen Park Cafe & associated catering facilities - www.nielsenpark.com.au - with a heavy travel schedule, and the versatility of the T-1600 appeals to a bloke with his busy lifestyle. The big question though, is the boat up to a lumpy sea & bigger water? After a 15 minute assembly during which the sea sock (included with the boat) and inflatable internal float bags were meticulously fitted, Rob & Chris had a play with the boat in the calm water of the harbour. They then headed out through the heads into a lumpy 2m swell to test the boat's performance pedigree. Click on the image above to see a slideshow of the paddle & conditions, which the TRAK handled with flying colours.
at July 10, 2009 3 comments: 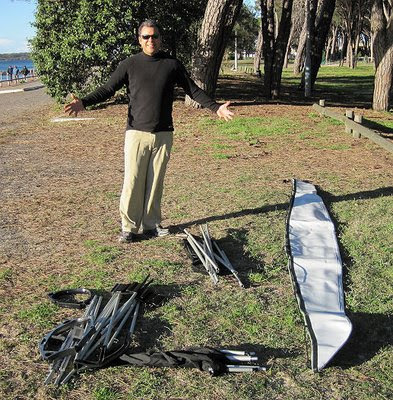 Our first shipment of TRAK T-1600 Folding kayaks arrived this week, with our demo included. Rob & I headed down to a windy Botany Bay to test out the claims of a 10 minute assembly & also to see if my recollections of the performance of the hull stood true, a couple of years down the track.
The boat itself comes in what looks like a golf travel bag, which weighs about 22kg with all components. It has a great wheely system which covered the bumpy terrain from car park to beachside without any problems. The astonishing thing about the TRAK when you unpack the contents is the sheer logic & simplicity of the parts. I've heard horror stories from 'folder' owners about 2 hour assembly, scraped knuckles & a physics degree being the pre-requisite for their boats, but the TRAK is definitely made for someone with my limited attention span & technical ability. I'd almost say idiot proof, but they say you've never met your biggest idiot, he's still out there....
The stern section comes together by lifting the stern piece, and watching as all of the poles fit neatly into place. The bow has a few more clips to fix, but all up the assembly of the frame takes about a minute for each end. You then slide the frame into the shell, fit the cockpit (a 10 second operation), the hydraulic jacks & the excellent ergonomic seat, and you're done. We then spent a few minutes tuning up the jacks to get the shell nice & tight, and were on the water within 20 minutes of our first attempt at putting the boat together.
So far so good. 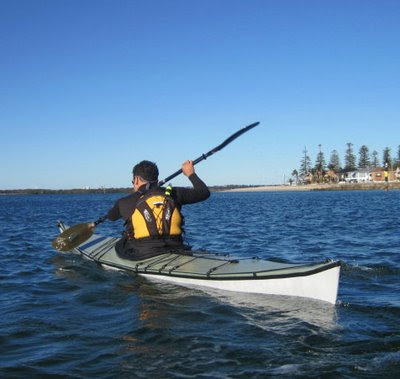 To be honest, I'm not at all interested in the 'romance', or boffin value of folding kayaks, unless the end product is something I can have fun paddling. For me, that means no compromise on the performance of a design like my composite Valley Aquanaut, just for the sake of having something you can take on a plane. My impression of more traditional folders is of paddling a flexing caterpillar or accordion frame over sea waves, a serious lack of speed, and the sort of 'performance' you'd expect from a wide, load carrying, purpose-built expedition kayak. Definitely not my cup of tea.
The appeal of the TRAK is the playfulness, speed & performance capability of the hull. The big river sequence in Justine Curgenven's This is the Sea 4 features whitewater champion Ken Whiting paddling a TRAK in grade 4 whitewater. So without any further ado Rob & I put the boat through it's paces, head to head against an Aquanaut. In the low rocker setting it's rock solid in the water, superbly stable, but with the same sort of secondary stability, and maneuverability that a boat like the North Shore Atlantic offers. In a sprint against Rob, who was in his Aquanaut, we were bow to bow over 200m paddling flat out, so it's no slouch on the flat stuff, with no noticeable bow wave & a rewarding return of speed to effort. With 20 knots on the beam, it ever so slowly rounded up into the breeze, but one crank on the Vari Trim handle on the gunwhale opposite the wind, had it tracking like an arrow. Once you can get over the bizarre feeling of paddling a boat bent laterally like a banana, you understand the genius in the design. It's got to be be the most innovative solution to weathercocking that was ever solooshed....
The shell is incredibly rigid, to the point that you can't even feel the waves under your heels through the hull, and for all love or money this boat feels and paddles like a composite sea kayak.
We're yet to get it out among the dynamic water of the sea, where we'll be sure to properly fit the float bags & sea sock to ensure bulkhead-like positive buoyancy, but our first impressions of the boat based on our short test are overwhelmingly positive. Words like revolutionary are banded around a bit too much in the simple world of kayak design (usually by me...!), but this boat is as near to something truly revolutionary as I have seen.
Like most of our boats, we have imported them because we want one! I do a lot of business travelling, & I'm already getting excited about the prospect of a paddle on Hong Kong Harbour surfing the junk wakes, or a sprint under the Tower Bridge in London, maybe even a cruise up the Chao Praya in Bangkok, not to mention the fact that I'll now have a dead-set performance kayak to play with when I go to the islands with the family.
The demo is available for test paddling by appointment - drop me a line f you'd like to take the T1600 for a spin.
at July 04, 2009 3 comments: 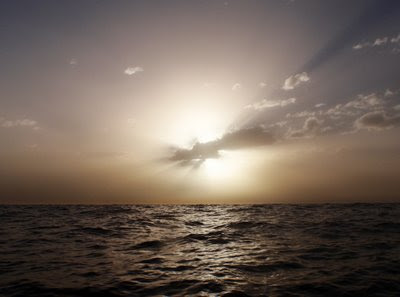 I have just returned from an awesome sunrise paddle with Greg Simpson, now the Commodore - such a fantastic title - of the Tassie Sea Canoeing Club, in town for a day or so on business. Because entertaining visiting interstate dignitaries is now absolutely considered to be work, I suggested we head out for a paddle on the late sunrise, getting a small taste of the great variety of water around the entrance to Sydney harbour.
I'll let the images tell the story here, it was a spectacular morning, unseasonally warm, windless & with enough building sea to make the cliff sections plenty of fun. As I write this it's a howling westerly outside so we snuck in just before the weather turned, sipping a coffee at Watson's Bay as the whitecaps desecrated our pristine early morning waterway. 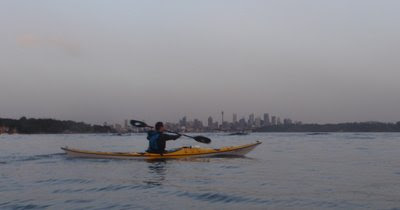 Greg striking out against the pre-sunrise skyline (note the lack of rudder....) 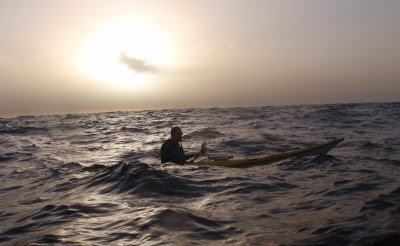 Gentle chop off the cliffs of the Gap

North head against the rising sun 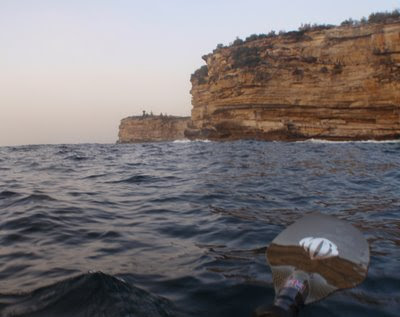 The cliffline south of Sydney Heads.