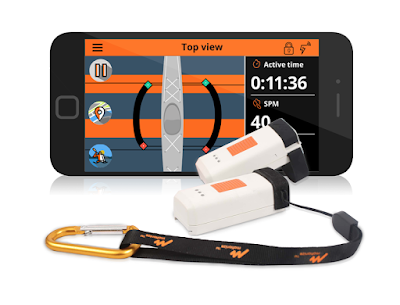 I've been following the progress of a new piece of paddling software developed by Motionize in the US, which offered the very appealing idea of being your very own paddling coach.

We received our stock of the item when they finally made it to our shores last month, and I've been  busy using it on my ski over the past few weeks to evaluate the relative merits of the Paddle Edge.

It's a very simple bit of kit, two small sensors, one attached to the middle of your paddle shaft & the other to the centre of your kayak, linked to an app you download to your smart phone. The kayak sensor has a strong adhesive base with a tether, and it's suitable to be mounted son anything from an Olympic K1 to a fishing SOT. Once you switch the sensors on & pair them to your phone (via Bluetooth), the motion of your paddling 'shape' is recorded via a very complex logarithm, giving you a surprisingly detailed overview of what you're doing, and how you're doing it.

Once you've set up your personal details (height, weight, length of craft, paddle length, paddle offset), the sensors record the entry & exit point of your paddle, the length of each stroke on both sides, the depth your paddle reaches into the water, stroke length, your rate or cadence per minute, even your heart rate if you pair it with your own HR monitor.
If you choose to, you can set your phone screen in front of you, and watch the data 'live' as it's being recorded, or, as I have decided to do, simply leave it on the back deck & have a look once you're finished.

So, it's one thing to have a bunch of data about your shape, but another thing entirely to use that data to effect change. To that end, the Motionize isn't really your own paddle coach, and in fact if you set the voice function to 'coach' you on the run, it does blurt out some pretty outdated information (as an example, in a C3PO voice you're told 'don't let your top hand cross the centre line'). But, it will tell you instantly where you're falling down and give you half a clue about how to fix it.

It's a difficult thing to review something that has a fair bit of hype surrounding it, and to maybe cut through to the things that for me at least, are important in a device such as this. Using my own paddle stroke as an example, here are a few observations, remembering that I have a fairly good idea of what I'm doing and where I have work to do, and a better than average idea of how to fix the problems.

On my first paddle with the Motionize Edge I set my phone up so I could see the screen, eager to test out the 'real time' coaching that it promised. I set off with a lovely consistent readout, quite symmetrical on both sides, clipping along, feeling like I was pretty damn good actually. After about 10 minutes the sensors had a problem connecting, and told me to stop and rotate my paddle 360 degrees in every direction (no easy feat on an elite surf ski). I probably had to repeat this exercise half a dozen times over the course of the hour, all the while the phone screen was telling me I was pulling 70cm on my left, 1.5m on my right. Even when I tried to correct by barely dipping my right blade, and hauling my left all the way back to the stern, it was still registering as symmetrical, even though it clearly wasn't. At this point I figured I must have set it up wrong and deigned to ignore it for the rest of the paddle. When I sat down to check the result, this was the summary: 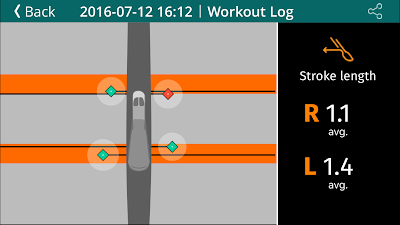 Not the radical mis-read I was watching on the screen, but instead most likely a very succinct explanation of why I've been developing shoulder soreness on my left side. A late, wide exit, which in turn is shortening up my right side catch. I spoke to the Motionize guys after this, they made the point that the software is like a coach, who won't tell you every single error, but will instead focus on the averages, an explanation which makes the data drops much less of an issue than I had imagined. They've also just released a software update which promises to make the connection much more robust, and my experience since updating has been almost 100% connectivity.

The second time out, aware of my stroke asymmetry, I grabbed a stable ski off the racks, and headed for the flattest water I could find, and worked very hard on a better exit on my left, and a longer reach for the catch, or set up, on my right. After 10km, this was my readout: 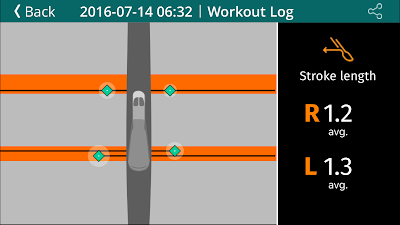 Basically, all good, just a fraction wide & late on my left, and importantly my form felt good, strong, in line, I went a bit quicker even though I wasn't trying to, really excellent feedback to act upon.

Third time out was a fun downwinder, 11km, 20kn of gusty westerly coming over my left shoulder, and here were the readings: 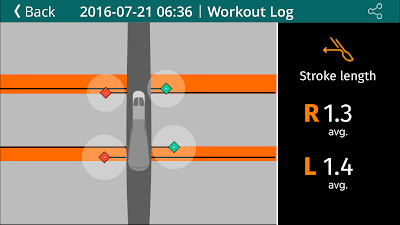 Conclusion from this, in the instinctive environment of the ocean, where you're long, short, side to side and doing a fair bit of lengthy trailing braces, the Motionize is perhaps not quite as useful with regards tracing the symmetry of your stroke. Other readings were helpful, like the average length of my stroke, and the huge variations in cadence as you constantly accelerate & cruise on waves. I notice Oscar posted a Motionize trace over a 50km paddle on the ocean on social media recently with a similar, wildly asymmetrical summary.

Finally, I used the Motionize on the Sutherland Club 5km time trial last Sunday morning, a proper race where I had a crack & tried to paddle hard, maybe without concentrating too much on form. It was perhaps the most telling story with regards the shoulder niggles I've been developing: 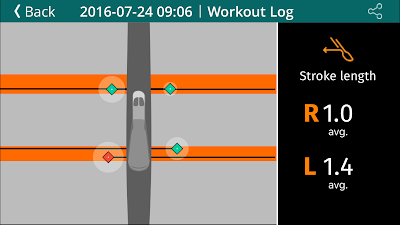 Three out of four trace points on the stroke are in good spots, if not a little short on the catch (but that could be my set up which varied by 500cm in boat length for this paddle), but way late & wide on the left exit again.

In conclusion, I think this is a very clever piece of kit, it provides some commonsense data which you can't really misinterpret, and if you took your data off to a coach I reckon you'd be well on the way to good form, with the added bonus of having a 'virtual coach' monitor on your progress. It does heaps of other cool things, like allowing you to set up intervals & targets for training sessions etc, but so far I haven't had the time to check them out. The Motionize website has a bunch of support videos for installation & set up, so you have a good online resource if you're technically challenged.

The interface is simple, intuitive, it works, and with the small caveat that you might find watching the readout constantly a bit distracting if not frustrating (which is one of the things the manufacturers list as a feature), well worth the price tag, which equates to about the same as a flash new paddle.

We're stocking the Motionize Paddle Edge, it costs $499, & you can order online HERE, including free freight within Australia.

Postscript: This week I took myself off to a local sport physio with my sore shoulder and a paddle shaft, & showed him what the software was saying. He gave my shoulder a bit of a flogging, then strapped it & sent me out for paddle. A mate sat alongside while I paddled with the strapping engineered to basically prevent a late left exit, and he commented on how good & clean my stroke looked. I finished without any of the aches that have beset me as I've upped my mileage recently.