Here's a review from the boat I've been getting to know over the past couple of months, both out on the ocean chasing down following seas, and also through 11 hours of toil on the Hawkesbury Classic. You can read Sea Kayaker Magazin'e review HERE.

Summer is a matter of days away, and we've got some cool new stuff just arrived for the warmer months, all available through OUR ONLINE STORE.
Kavu never let us down with their eclectic mix of practical but groovy water hats & apparel. We've added some new hat colours, including the Paddler's Chillba ($29) in a nice Rust colour. 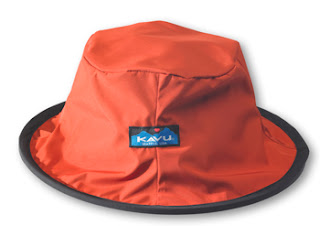 Kavu Paddler's Chillba
There is the merest hint of Baywatch in the Big Eddy Paddle Shorts ($49), and the revival of the full canvas Strap Cap ($29) in red to match the Big Eddy shorts.

Kavu Canvas Strap Cap
We've also got some new colours in the ever popular Perma-Grin Shades, a retro Tortoise Shell & a stylish Cloud ($89).

Kavu Perma Grin Shades
We have re-introduced the short sleeved NRS Hydroslik rashie ($49) for summer in a charcoal that will match the Perma-Grin Cloud Shades (an important consideration if you're contemplating a charcoal theme….)

NRS Endurance Short Sleeved Jacket
Finally, by popular demand we have now started to stock the Reed Neoprene Skirt ($129) with map loops. This is as tough as teak, not as light & breathable as the Aquatherm version but a great option if you're doing a day of rescues or rock gardening.

Reed Neo Deck with Map Loops
You can order now OUR ONLINE STORE.
at November 22, 2012 No comments:

A few weeks ago Rob got talking to his good mate & local paddler Bob Turner about the club he belongs to, the Sutherland Shire Canoe Club. Bob was eager to expand the horizons of many of the club members who owned sea kayaks, but were primarily paddling the enclosed waters of southern Sydney, caused mainly by a lack of group confidence to safely head out to sea.
Rob suggested a training weekend where we would put together a program designed to give these essentially flat water paddlers a taste of open water and the basic set of skills to paddle safely as a group in the sea.

We expected (and planned for) about 15-20 paddlers, so were greatly surprised when Bob started to push through the numbers in the days prior to the event, with over 40 paddlers eventually registered.
We had to swiftly pull in some help in the form of trusted paddling mates Fernando, Rae, Chris & Shaan to cater for the demand, something we hadn't anticipated to be so strong.
The miserable Friday weather cleared to a sparkling Saturday and we divided the groups by ability & set off on a day of skills training & adventure.
To give you an idea of the progression through the day, my first act with my guys (Rowley, Sam, Albert & Ross) was to teach them a safe wet exit in four feet of water off Bonnievale. Three of the four hadn't performed one previous, nor worn a spraydeck.

Sam, Rowley, Ross & Albert
Six hours later we were parked out at sea, bobbing around off Jibbon Head, performing deep water rescues with increasing speed and competence. In between we edged, fell in, manoeuvred, fell in, braced - successfully & not so successfully - and had a hoot of a day with about equal time divided between being upright in the boats & swimming around next to them.
This is something of a leap of faith for paddlers used to racing on the fat, where the water is something to be avoided, not swum in! Not only did my guys rip into the activities but they all made great progress as the day wore on and finished with hugely enhanced confidence about venturing beyond the safety of enclosed waters. And when I pointed at a far marker and said 'let's all head over there for the next drill' I was doing well to foot it with a bunch of paddlers with excellent forward stroke technique and fitness. I had to keep making them fall in to give myself a breather….
The reason for this rapid progress? I reckon it was the club spirit on show so clearly through the day. Sometimes clubs can feel like an amalgam of strangers, reintroducing each other at each varied & distant event & never really showcasing the characters under the neoprene. By contrast these guys paddle together most weekends, race in organised events on the Woronora River at their club house, and plainly they not only know each other well, they know each other well enough for some pretty fearsome exchanges of banter!

I loved my day out with them, barely a moment passed without a chuckle as someone stuffed something up or a cheer when it went right, mixed in with a comedy routine that would have done Jerry Lewis proud. It's an atmosphere that fosters encouragement, it's a long time since I've heard paddlers clapping one another on a training day. Most of the day I felt like I was back in the dressing room at Coogee Oval.
A sun-beaten and pleasantly weary mob descended on the Bundeena RSL for dinner and a presentation from Shaan on the story of her remarkable solo Bass Strait trip. While there was a party in full swing at midnight on Friday around the camp site, no such bonhomie was apparent on Saturday after the dinner, I think the sea had woven it's wearying spell.
Sunday was a less formal day with some rolling classes for some, and a sea paddle for the more adventurous out to Boat Harbour & back. Judging by the smiles on the dials of those returning with a building Nor' easter from Boat Harbour, Chris & Fer had achieved the right mix of safety & exhilaration on their well planned 'experiential' trip. The group Shaan, Rob & I took also had a nice taste of steep moving water as the wind kicked in on the return journey to Bonnievale, to conclude a cracker of a weekend.
A big thank you to Bob Turner and his merry mob from the Sutherland Shire Canoe Club. We were so impressed with the 'give-it-a-crack' attitude and good humour evident among the members.
Thanks also to Chris James, Shaan Gresser, Raewyn Duffy & Fernando for coming along & sharing their collective wisdom, safely guiding their respective groups through a rigorous day of skills & confidence building, laced with fun.
at November 21, 2012 No comments:

True to form, Epic have sprung a surprise on us all with the redevelopment of their game-changing V8 surf ski.
I collected our boats from latest container last week & when we unwrapped the V8's bound for Gary & Trish the changes to the design were obvious.
This new V8 looks sleek, has slightly less rocker, features some clever new design features that will improve it's 'big water' performance, like an angled top lip of the seat, side handles to make rescue & remount easier (as well as portage), and a new footboard that allows you to run your hydration tube underneath.
On the water it lost none of it's stability, felt like in ran longer and was a far more aesthetically pleasing craft.
Well done Epic, we have stock on the shelf ready to go…

Some pics from Rob's talented Tuesday crew out amongst it. I reckon there are some beauties here, all photos by Rob Mercer.

Dave in his Taran

The most enjoyable paddling weekends on our calendar are those run by small, passionate pods of kayakers up & down the coast, & the one that captures that spirit more than most is the excellent Klancopia at Umina Beach, run by the Hunter Kayak Klan.

This year there were about 25 paddlers on the water, with the new starters heading over to Patonga with Sharon Betteridge & Shaan Gresser, and the sea dogs heading out into Broken Bay with Rob & I for some 'live' training.
We feel that we are among mates at Klancopia, and the community feel extends from the informal 'opening ceremony' among the tents on the Friday evening, through the Saturday night entertainment (both organised and 'ad hoc'), and on into Sunday's messing around in boats session on the beach at Patonga.

Organiser Shawn Armitage built on last year's more organised itinerary, and pulled together another cracker. The Saturday evening was a particular highlight, where Klan members gave short presentations on a subject of their choice, ranging from short on-water videos to comedy slideshows, to paddle explanations to fix-it advice.


I enjoyed the creativity & humour far more than listening to a typical presentation from a guest speaker, sometimes it's important to remember that everyone has a story to tell about their own paddling.
I'll let the images tell the story of a fun weekend. Thanks to Sharon & Shaan for turning out a top day on the creek at Patonga, and to Shawn for remembering to bring the ukuleles.
Well done you Klanners….!