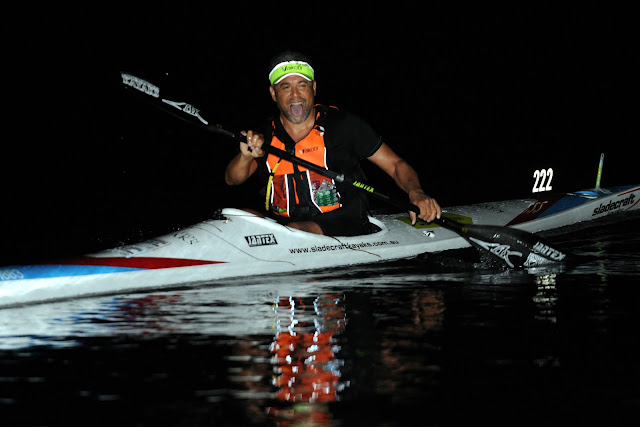 Hawkesbury Classic number nine has been run & won, on one of those rare years where the hardy souls plodding down the river had to battle a pair of incoming tides.
On the upside, the moon shone bright for good portion of the night, and when it eventually disappeared over the escarpment it was replaced by a shining carpet of stars.
Combined with a warm & windless evening, this made it one of the classic nights out on the river, one to savour and enjoy. 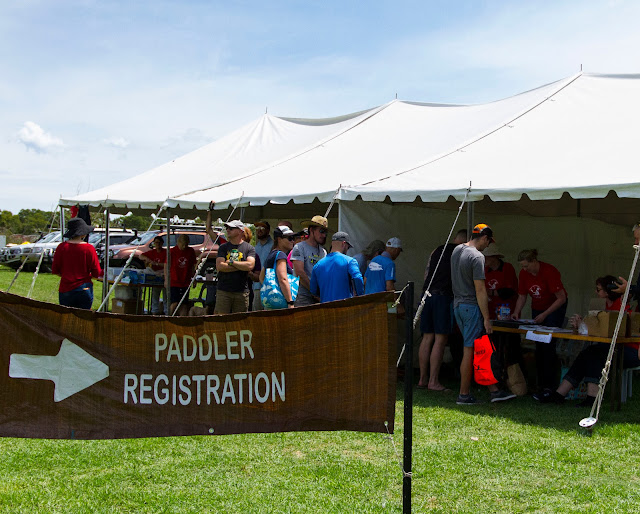 Arriving a little late after a morning spent coaching Marley's under 10's cricket team, rego & scrutineering done, I relaxed & geared up for my 4.45pm start. Wandering through the boats lined up around the registration area is always fascinating, seeing how paddlers set themselves up for what in many cases is a paddle of 12-16 hours. Ocean skis with stuff all over them, goos taped to decks, bananas in footwells, drink bladders under bungees, bluetooth speakers, you name it.
I hung out with my club mates from the Sutherland Shire Canoe Club, both paddlers & crew combining to erect a shaded campsite visible from space, where the excitement of the impending race start is tempered by the necessity to get your head down & rest through the intensity of what was a damn hot day out at Windsor. 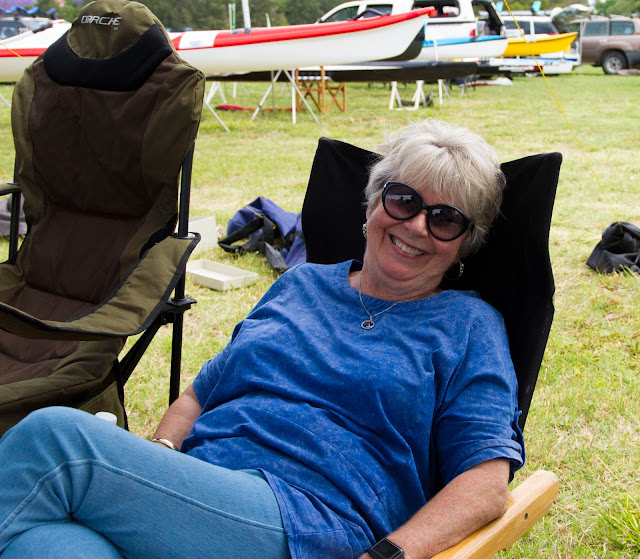 The Brooklyn or Bust field is away first, a widely varied bunch of kayaks, canoes, SUP's, outriggers, even something that looked a lot like a polo bat, and it's always a treat to see this hugely optimistic group get away on the adventure that is the Hawkesbury Classic, many of them doing it for the first time. 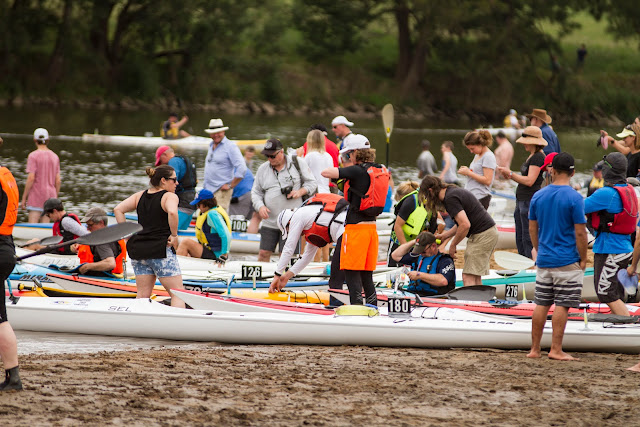 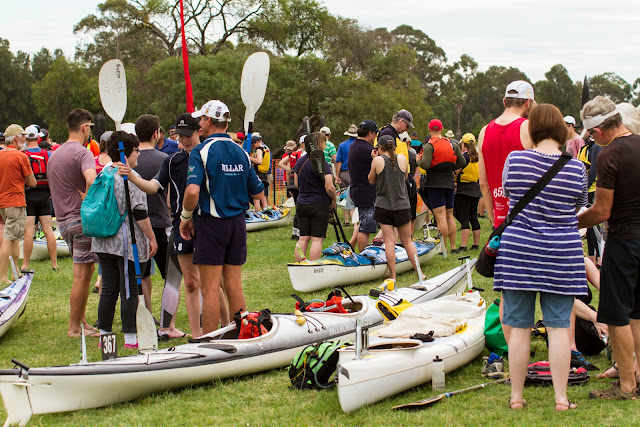 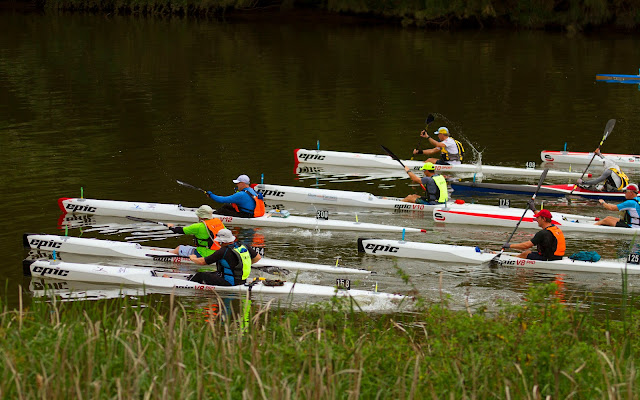 My own turn to line up came around soon enough, and unlike previous years I waited until the last minute to get on the water & skipped straight to the front of the lineup. I figured this was 10 minutes I didn't need to be on my backside in the kayak!
From the gun the pace was frenetic, with almost all 100+ competitive class paddlers going off together into the teeth of a flooding tide. I had budgeted 9kmh for the first 3 hours of contrary flow, but such was the wash effect of so many craft thundering down a river less than 150m wide, we managed to crack 10kmh for a good part of the first 90 minutes. As the field began to spread, the tide kicked a little harder but working in a great pack with paddlers going like the clappers meant I hit the 30km mark in a tick over 3 hours. 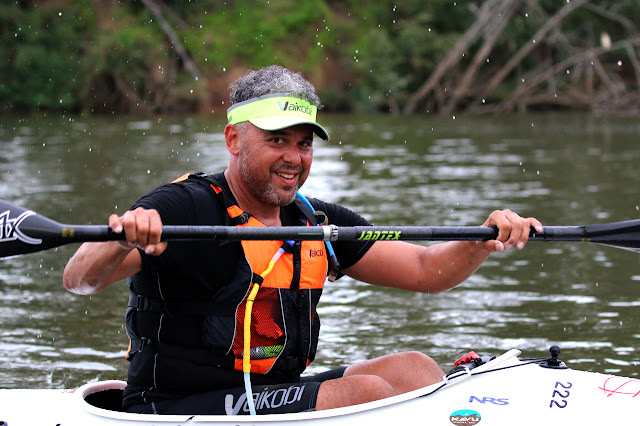 From Sackville to Wiseman's Ferry, the leg that generally makes or breaks your race, we had a gentle ebb tide which meant we could stick to the middle of the river as darkness fell, & avoid the biffo of last year's race. 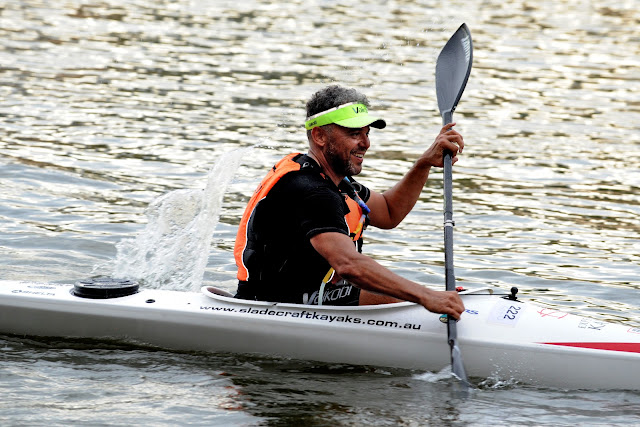 I hit Wiseman's (59km) in 5.50, and felt that with a quick pit stop I was half a chance of getting under 10 hours. Water bladder changed, a huge, noisy, and I have to say heart warming cheer from all of my club mates and I was away on the final 40km run to the finish.
I tell anyone who wants to hear it that the Hawkesbury is really a 60km race, as after the pit stop at Wiseman's Ferry you're on your way, and of all the Classic's I've raced over the years that back end is mostly a blur.

This year I rode the easing ebb to about 75km, then latched onto a two man canoe that was absolutely smokin' down the home stretch. This was one weird canoe, the stern paddler only about half a metre from the stern, leaving enough room for their compulsory cyalume night stick, so for 15km I was literally surfing these two mad buggers as the head tide built, being very careful not to over run into the kidneys of old mate in the back seat. I have been teasing my mate Steve & his wife Kate about their funny canoe thingy's for years, and here I was wash riding Casey Jones & Tonto along the final leg of the Classic, busting my arse to stay with them. I'm so glad there were no photographers handy.

Anyways, after they dropped me cold, I battled along the final 10km, at one stage looking like I was heading for a 9:50, but watching the tide drain my speed from 9 to 8.8 to 8.5 to 8.3, until I had 17 minutes left to go 3km for a sub 10 hour finish, which was about as likely as me publicly admitting I'd wash ridden a frigging canoe.

I crossed the finish in 10:04 (unofficial at time of publication), my best time by 10 minutes, in a year that had a much stronger opposing flow than a helpful one. I can't imagine paddling a better race, nor getting more breaks, with no ferry stops or unexpected pauses (like last year when I had to rescue Mercer)

So a good time and a well executed race, but my memory of the event this year, is of the tremendous club effort from my Sutherland mates, their genuine good will & good wishes, and the shared joy of having everyone finish, and a couple of stellar performances from Ross & Robyn Bingle (a minute off a race record), Pete Faherty (9.45 on debut, 12 months after he first picked up a paddle) and Kate Dawson (first woman ever to complete the Classic solo in a stupid canoe).

It's many years since I played a team sport, and at that level it was all about ruthlessly demolishing your opponent, before you shared a beer with them afterwards, but this was a proper community effort. The Lane Cove guys looked to be enjoying an atmosphere every bit as good, and it's something in kayaking that we all need to aspire towards, the shared joy of collective achievement. Where's the fun in a milestone if you haven't got mates to share it with?

Congratulations to everyone who took part, whether you finished, didn't finish, or like my mate Axeman took a left turn at Wiseman's and did your own private 115km 'Central McDonald Classic'.

It's on again next year, it can't possibly be any harder than it was this year, and it's something you've got to have a shot at if you're fair dinkum!