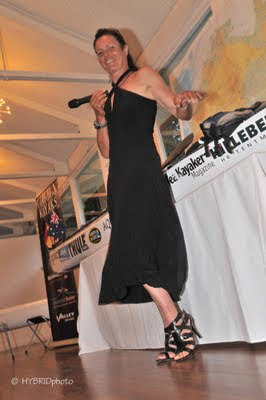 Freya Hoffmesiter (photo Andre Janecki - www.hybridaustralia.com - to see a full photo gallery of the night from Andre, click HERE)
A magic Sydney summer evening at Neilsen Park on the harbour played host to Freya Hoffmeister's final night in the country she has successfully circumnavigated by kayak. 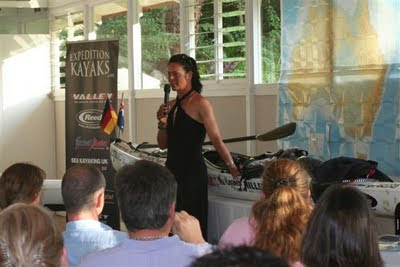 An entranced audience of paddlers & admiriers listened in as Freya tried to convey the mindset & scope of her epic paddle. She showed us how she managed to sleep out on the Gulf of Carpentaria, laying back like an aquabound crucifix holding a double floated paddle, the big bite marks on the stern of her boat courtesy of a friendly Noah at Broome, her boat itself, the vessel that she propelled 13,000km clockwise around the country, in just on 11 months, and most of all she gave glimpses into her motivation. 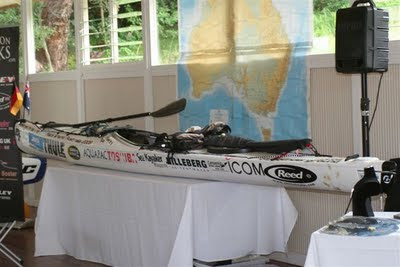 The Epic 18X which took Freya from Broome to the finish.

Her decision to call the trip a race was a masterstroke, when you consider the mindset of the competitive athlete. A race gives you a goal, an opponent (even if the hologram of Paul Caffyn was tailing her through the pages of his book), a finishing line & the motivation to keep going. It's not the usual approach of the recreational sea kayaker, but Freya is sure not your usual paddler. The idea of competition & measurement don't tend to do it for most sea kayakers, but if there is one thing we can learn from Freya's paddle & her talk, it's that it doesn't hurt to push yourself and aspire. 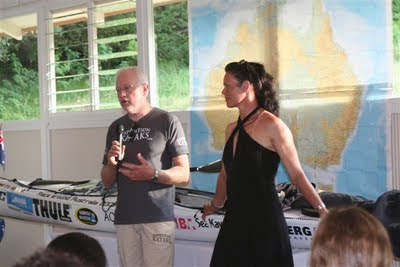 Rob Mercer does the intro.

I was speaking to friends & paddlers present on the night, & we were talking about the biggest days we have ever done on the water. Many of us can claim a 60km or 70km day here & there, but the question is, 'what did you do the next day?' Not too many hopped up & did it again, or maybe punched out 80 or 90km, & then another 60km the next day & so on. Forget the uber paddling like the Gulf of Carpentaria & the cliffs, just the mental toughness to keep at it boggles the mind. 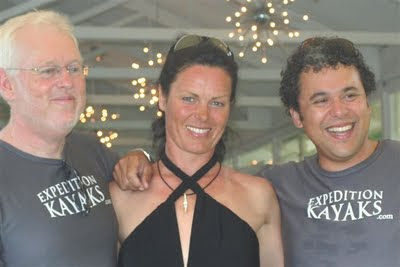 Before she left for her circumnavigation we had dinner & after meeting her I wrote:

"Starting with a 2500km stretch from Victoria up through the East Coast surf zone where just about every single day you will have a very serious surf landing & exit with a fully loaded boat. Factor in the afternoon Nor'easterlies that predominate through the 2 months of her journey north, & her goal of 60km + per day, & she will have very early starts & a very solid pace to beat the demoralising headwinds. Then the 'pleasure' of the protected reef zone, with the onset of the trade winds, 25-30 knot daily winds which produce technical, almost surfing following paddling conditions. Then the vast loneliness of the top end, with the crocs, huge tidal zones, heat & humidity, & the lack of regular re-stock. Consider that this stretches right across the top of the continent, eventually giving way to the rugged WA coast, with it's unbroken cliffs stretching as far as 130km at a time. Clear that & you hit probably the biggest surf zone in the country, down through Margaret River & Esperance, where 16 second wave periods create miles of unlandable surf, then turn the corner to the Great Australian Bight for the 'run home'."

Probably the only bullet she dodged on the way around was the benign conditions on 90 mile beach in the first 2 weeks of her paddle, otherwise Australia threw the lot at her!
An amazing feat & an amazing lady, happy travels Freya, enjoy Xmas back with your family, & we hope to see you again. 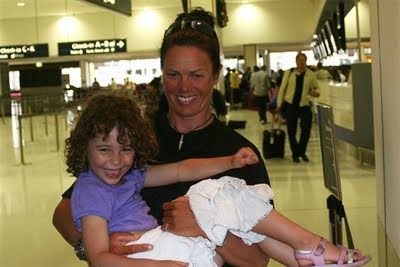