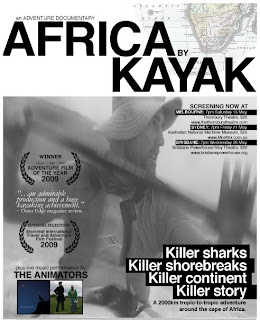 
As a paddler, the idea of 30 days paddling a remote coastline with vertebrae crushing surf, a big landing & launch at every sunset & sunrise is about the most committing thing I can imagine. I remarked to Beau after the film that it was the sort of trip you'd only do in your 20's! Add to that the logistical nightmare of negotiating his Australis Kayak through corrupt customs, visas which expired before countries coastlines were finished, and the terrible impact the disappearance of Andrew McAuley had on Beau, happening as it did during a tough period of his own trip, and you have a combination of big water surf survival & raw emotions.
Dates are below, and the show features not just an awesome adventure film, but live music as the soundtrack from the Animators. Get along if you can, it's one hell of a story.
Melbourne: Saturday May 15
7pm at The Thornbury Theatre
Sydney: Friday May 21
7pm at The Australian National Maritime Museum
Brisbane: Wednesday May 26th
7pm at The Powerhouse Theatre
at April 13, 2010