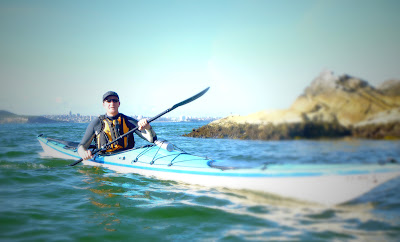 Ian Fletcher
What's so special about an 11 year anniversary? Umm, plenty if you all managed to allow the 10 year anniversary to pass by a year ago without remembering…
Last Tuesday I went out for a paddle to celebrate eleven years since Rob Mercer first began his Tuesday afternoon training paddle. It was also a de facto Xmas paddle with a picnic on the grass at Watto Bay afterwards. Like most of the Tuesday night paddles when the forecast is pretty timid, there wasn't a huge roster, contrasting the days when there is a bit of sh-t in the forecast & Rob gets 12-15 paddlers along for the experience. It's probably one of the few sea paddles where you throw in a forecast 20kn nor' easter or some solid groundswell & everyone wants in…. 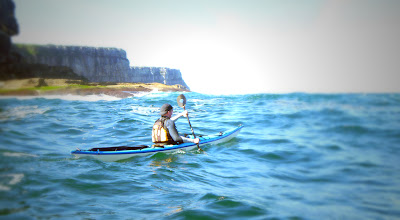 Ian Rounding a benign North Head
One of the paddlers on Tuesday was Ian Fletcher, who told the tale of his first Tuesday paddle many years ago when very much a novice. It was his first 'live' sea paddle & to this day he says it was the biggest day he's ever been out on, with many sea miles under his belt since. He recounted being encouraged to capsize & be rescued, perform a rescue in water that he considered unthinkable to be out of your boat & immersed in, & came away from this first experience wanting more. 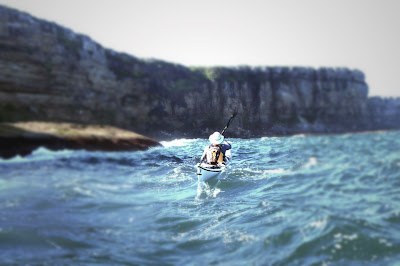 Rob cruising along in his backyard
It's a common tale among the regulars, everyone seems to remember the day when this happened or it was breaking over South Head or we saw a waterspout out to sea or whales or such & such managed to run aground on those rocks et etc.
After such a long time it's become an institution in Australian paddling, with scores of guest paddlers from interstate & overseas, & offers a unique & regular opportunity for sea kayakers to get out on the sea in nearly all conditions & learn & develop.
As always it was great to be out on the sea with Rob & his group, and the event was worthily celebrated afterwards with a few cold beers & cold chicken at the peerless Watson's Bay.
at December 13, 2010