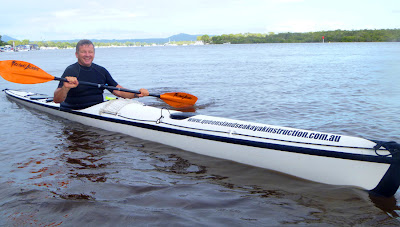 Gary Forrest in 'Frankie'
I just spent a relaxing week with my family in Noosa, staying in an apartment on the river & spending my days messing around in the pool & on the beach. It was a rare window of impeccable weather among the atrocities experienced in Queensland in the last month, & some all-too-infrequent down time for me with Nic & the kids.
My mate Gary Forrest kindly lent me his spec ski to keep my eye in while I was away, & I managed an hour or so early morning or evening out on the river & the Noosa Bar trying to get the hang of these iconic Australian surfcraft. One comment I will offer on them, make sure you fit properly before you paddle! Gazza's has a wider seat & slighty shorter legs than the perfect fit for me, & it compromised my stability enough to present a few challenges. 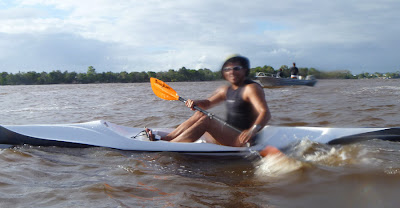 Fuzzy photo 'cause I was going too fast, or wobbling too fast...?
Like most good designs though, first impressions, especially to do with stability are quickly overcome as you spend a little time on the water figuring out how any particular hull works. I think specs skis are true surf skis, designed for breaking water & lifesaving, & the modern ocean racing skis are just that, unbelievably good for racing in the ocean, especially on following seas. 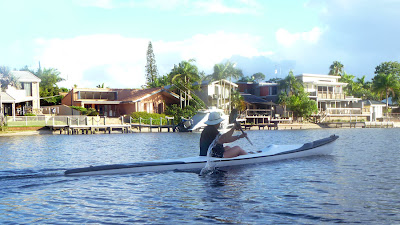 Gazza looking relaxed in his spec ski
Gary came to collect the ski on Saturday, & we went for a paddle around the canals & out to the bar, swapping between his ski & his hybridised V10 Sport, which he & a local manufacturer have turned into a full decked expedition boat. Gazza calls it Frankie, as in Frankenstein, but the lines are a hell of a lot smoother than the ol' bolted one.

Gary is a remarkable paddler, having followed the same course as me through a club, where he was taught the basics, progressed to repaying his debt by becoming a sea leader & then a Level 2 Sea Instructor. He is a legend on the Sunshine Coast especially among the surfers who shake their heads at his big wave surfing, in his array of longboats. I showed the guys at Valley his film clip surfing the Nordkapp on a 3m swell at Mooloolaba, & there were all round sighs as their beloved boat shot along on the big waves.. 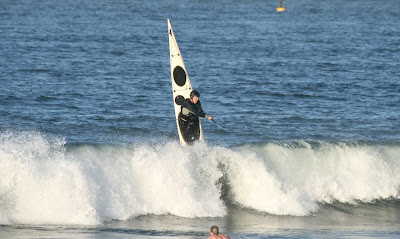 Gazza in typical pose on the Mooloolaba Bar
Last year along with Eddie Safarik & Paul Wilton he made the first successful crossing from the mainland, 85km out to Lady Elliot Island & then along the islands of the Capricornia Cays. It was a trip with some big moments & a sea kayaking first - as the guys discovered, there were a few good reasons it hadn't been done before.
He recently set up an instruction business based on the Sunshine Coast, and is quickly earning a place alongside the Gold Coast's Craig McSween as a modern & hugely skillful sea kayaking instructor. If you're on the Sunshine Coast & looking for someone who can teach you the skills to paddle on the sea, Gary is your man. 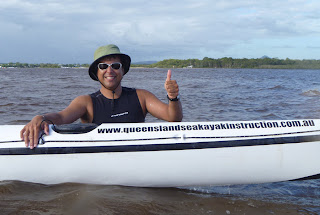