A Week in the South 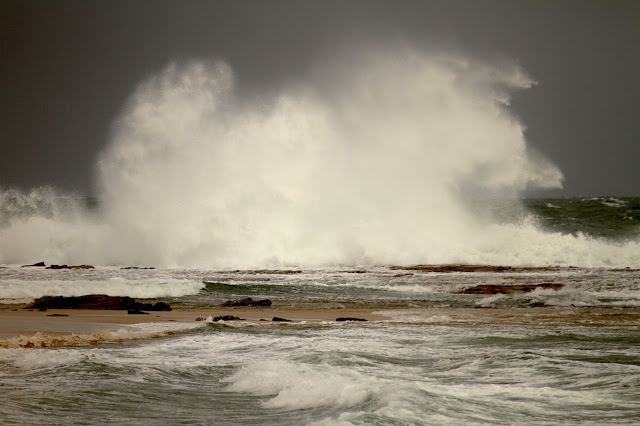 An invitation from the Victorian Sea Kayak Club to return for a second year to their Blue Water Weekend & AGM at the Wonthaggi Surf Club on the beach opposite Cape Patterson had us planning a trip south since September.

The sad passing of our great mate Mick MacRobb on the Sunday prior to the event meant a slightly rushed pack & departure, so we could be at the service to commemorate Mick's life, in Paynesville, just around the corner from his home in Eagle Point.
Despite the desperate sadness of Mick's loss, both Rob & I were very humbled to be asked by Mick's partner Lyn & his Dad Graham to speak at the funeral, and to shine a light on his contribution to the paddling world. A eulogy is no easy thing to deliver, but it's an honour you try your best to fulfil.

The paddling world that Mick had such a giant influence over was there in force, with huge numbers attending from his own Victorian Sea Kayak Club, and others he'd spent time paddling alongside over the years. It was a reminder of the tremendous community to which we are all very privileged to belong.
Tim, Sarah, Bob, Rob & I then had our own little celebration of Mick's life in the evening, a night with a few tears & a lot of laughs, just the sort of evening we'd wiled away with Mick countless times over the years.

The following day we bid our goodbyes to Lyn & Mick's family & headed for the Bass Coast and Cape Paterson. This is a stunning part of the world, clear, cold blue water & on the day we arrived the sunshine revealed a craggy coastline of white sandy beaches & rocky headlands.

We had two coaching sessions booked in for the Friday at the nearby coastal village of Inverloch, a morning clinic on boat control with a twist, and an afternoon where we crafted the coaching around the consensus of the participants, and were lucky to have Tim Pearse come along to help us out.
Both were well attended, and despite a building breeze that reduced our usable seaway at times to a couple of hundred metres, both groups were willing & adventurous & had their boats moving in ways that many hadn't thought possible! 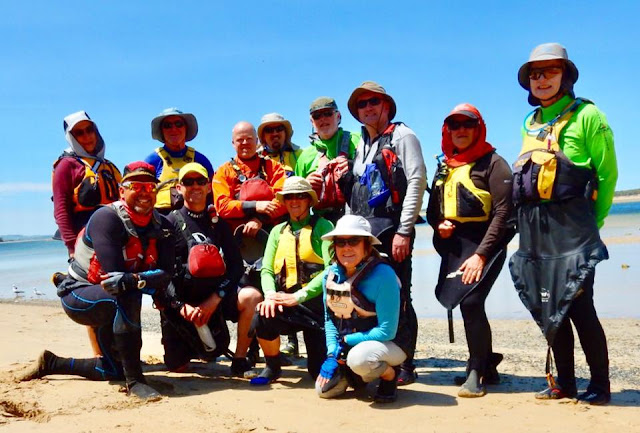 As we got off the water the wind shifted sharply to the west and the temperature dropped alarmingly. Although this wasn't the big system that was forecast for the weekend it was still a stark reminder of how quickly things can change in this part of the world. 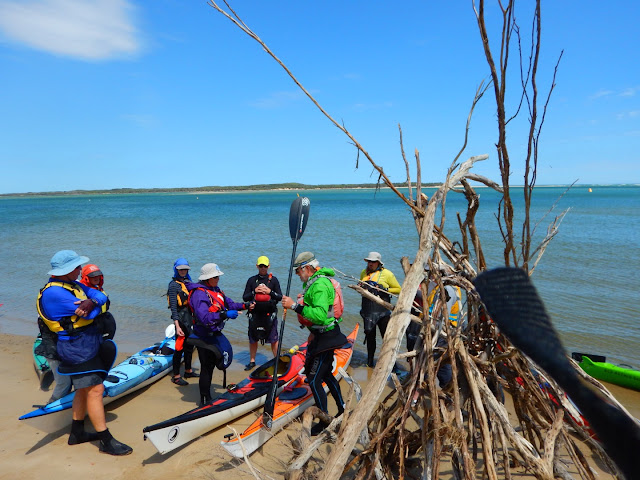 We grabbed a quick meal at the excellent nearby tavern & then headed for the surf club for the opening session of the Vic's weekend. Bob Fergie presented a terrific slideshow based around his catch cry - 'Capsize is inevitable, but recovery is possible'. Bob is one helluva big character who has overcome his fair share of setbacks to even get out on the water, let alone being the beacon of positivity & inclusiveness that he is. He's about to start his own paddling enterprise 'White Dog Kayaking', aimed at using kayaking to overcome mental illness and depression, so keep an eye out for that when it launches.

As we were making our way back to cabin the front finally hit. It sounded like an A380 taking off over our roof, such was the ferocity of the wind & rain squalls. At Wilson's prom the winds were raging over 50 knots, and we were pretty keen to get down to the beach the next morning to see what it looked like! 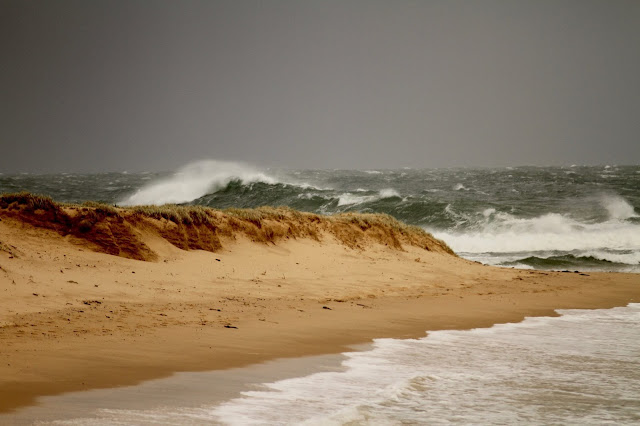 Saturday dawned pretty bleak, howling winds, seas that were off the richter, and nothing to suggest it was going to ease any time soon. I had booked in to go on a paddle with Peter Costello, and he'd abandoned any ideas of an ocean paddle in favour of a downwind paddle on the Powlett River. 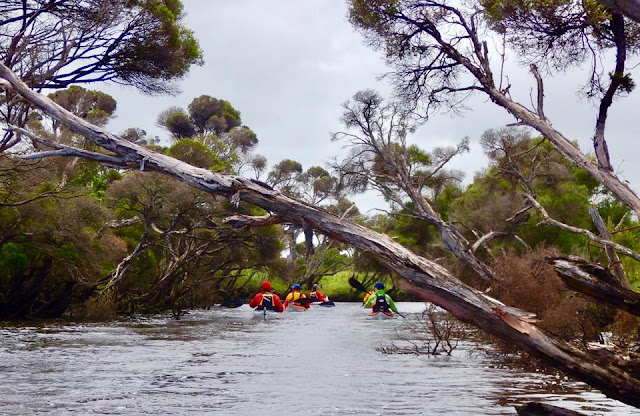 We arranged a car shuffle, and set out through the mud & cow dung to blaze a trail towards the highway. This was some experience, we were blown along at 7kmh without paddling, simply by fluttering our paddles to catch the tempest raging behind us. We enjoyed it so much that we headed past the car shuffle point & went as far down as we could before the thickets stopped us from progressing. Then we had to earn our hot chocolates punching back into an incredibly strong wind for a kilometre or so. 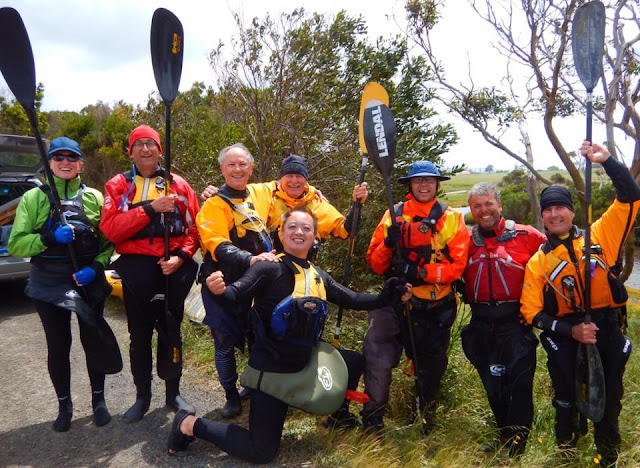 In the arvo I ran a forward stroke clinic on the ergo machine which was meant to go for an hour but ended up going for nearly three, maybe because it was about the only safe way to get a paddle in! 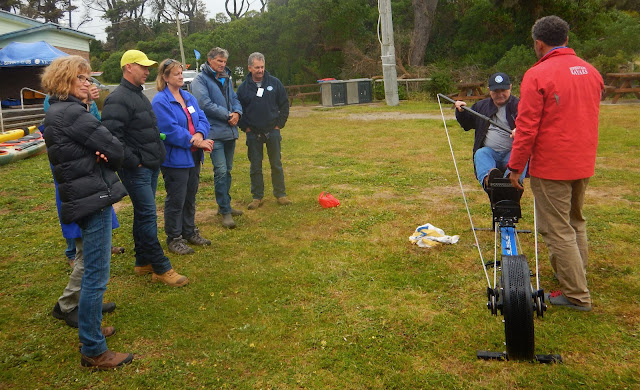 The club arranges a locally catered dinner for the Saturday evening & it did feel a bit like an Alaskan hunting lodge, with the weather raging outside & a good hearty meal on our plates. Mark Thurgood opened many eyes to the endless possibilities of paddling Moreton Bay in his evening presentation. John Woolard, one of Mick's oldest mates, stood up & gave a most beautiful tribute, something I'm sure everyone present will cherish. Once the formalities were over we got down too the less-serious business of catching up with old mates & telling a few lies. 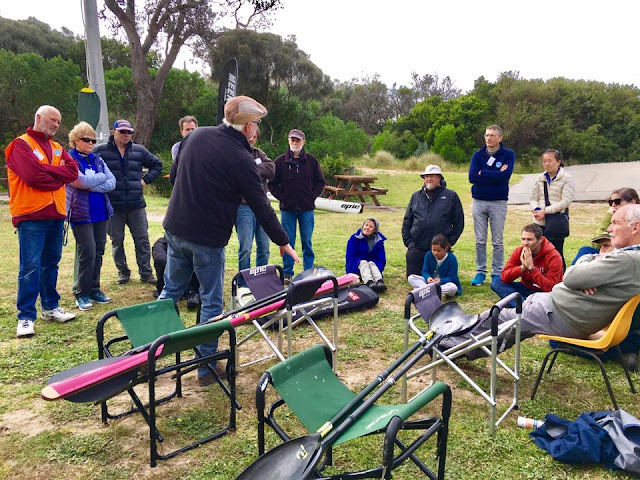 On the Sunday morning the weather again wiped out any suggestions of an open water paddle, so various clinics were offered in & around the surf club. Rob ran a session on paddle selection, which picked up numbers as it went on & passers by realised just how complex and multi faceted the nuances of each of the Greenland, Flat & Wing paddles actually are. If Rob runs this workshop at an event you're at, make sure you get along, it's a beauty.

We bid our farewell to the Vics after another lovely lunch in the surf club, & headed north. 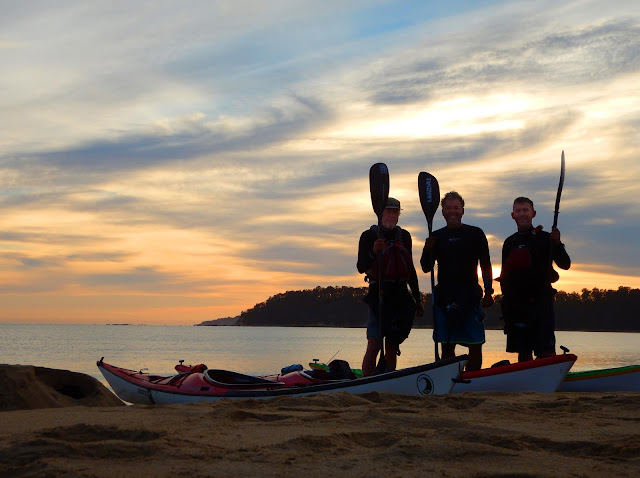 We'd been speaking with Tim during the week about his plans to get back to Sydney from Cape Paterson, and he mentioned that he'd promised to take Mick out for a paddle to Honesuckle Point, and the lava rocks off Eden, when he recovered. 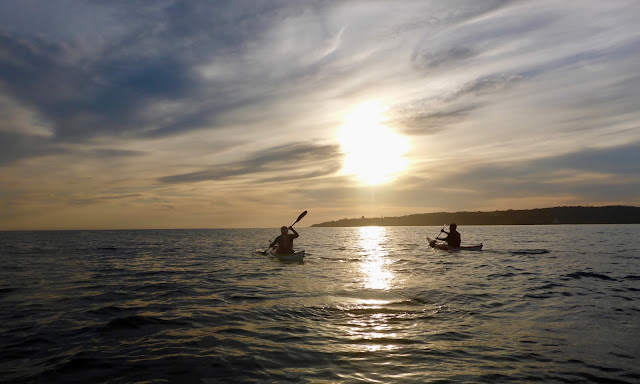 It was a paddle the two of them had done before & Tim was mesmerised by Mick's knowledge of the area & the geology and was keen to throw that up as incentive to his friend.

Sadly that paddle never eventuated, but Tim was determined to go anyways, and Rob & I thought it might be a fitting way to say our own quiet goodbyes to our old mate & tagged along. You couldn't imagine a more beautiful sunrise, we had humpbacks breaching out to sea and several pods of dolphins escorting us along the way. An amazing place. 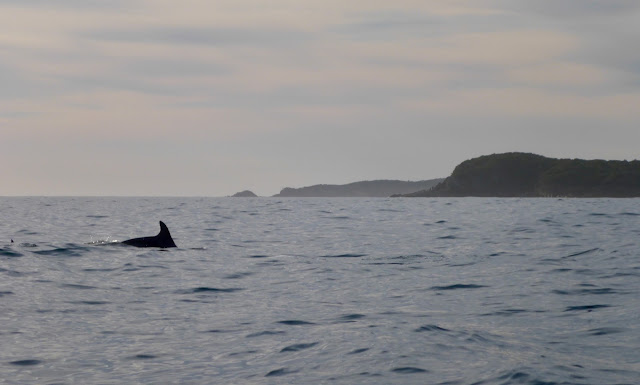 Our little paddle rounded off an emotional week, where at every turn we were surrounded by paddlers, many of whom were hurting just as we were in the wake of Mick's tragic passing. We both want to thank the Victorian Sea Kayakers for their welcoming ways & the hospitality we were shown, and look forward to getting back down again in 2017.