So we all have old mates, the friends you've had from forever who you see maybe once a year, and then it's just like you're back in the dressing sheds/beachside flat/pub from all those years ago, despite the intermittent contact in a busy life. 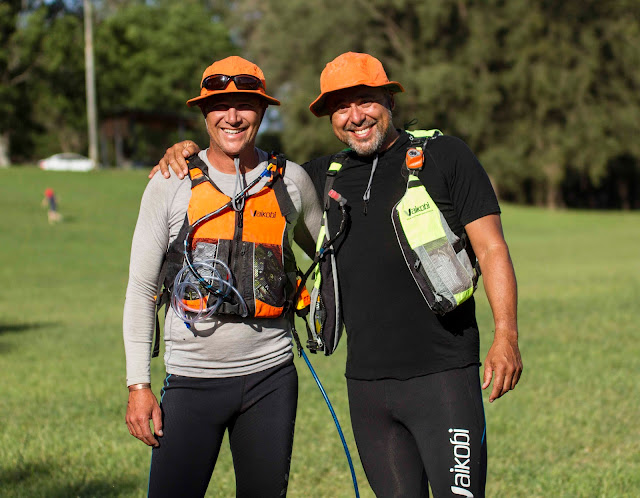 My mate Axe and I played for Randwick together in the 90's, shared a flat in Coogee, and had a lot of fun on & off the field during those golden years. Man did we have some fun.

All good things come to an end, and we eventually had to get our heads down, start behaving like adults, raise a family and do our best to grow up, as life enters that blur of babies, kids activities and you become engrossed in your family. The catch-ups were always a hoot, but they're inevitably a long-planned Sunday arvo BBQ or someone's 40th or an annual Randwick reunion.

A couple of years ago Axe asked me about paddling, and teamed up with his mates Bob & Nick to train & prepare for the 2017 Hawkesbury Classic. Whilst Nick & Bob made it to the end, old mate forged a new adventurous route, the now legendary 'Central McDonald Classic', after turning left after the Wiseman's Ferry checkpoint, instead of going right. A bit scratched up and dehydrated, but thankfully without the trauma of encountering any oyster farmers up in that particularly backward backwater, he declared the Hawkesbury was unfinished business.
So this year I suggested we paddle a double ski, do some ocean paddling (having retired completely from any form of river training) and give the race a crack as a team. We grabbed our demo Gen 2 Epic V8 Double; longer than an elite single ski but with stability to burn, and decided to race in two of the three lead-up ultra marathons, 30km in Wyong & then the 47km Myall Classic. The Myall of course has the added bonus of a pub with accommodation right across the road, an excellent spot for a recovery session.
Both of them were run in big winds, with crappy river conditions & some positively toe-sucking tides, but we battled through & had some fun, not too concerned about our times or speed.
Finally the big dance arrived after a training program based on a few races, and a lot of tapering. We've actually designed an entire ultra marathon program if anyone is interested, based mostly on tapering. It's a cracker.

We soaked up the goodwill from the Sutho crew before the race, The Don taking Axe aside and offering a few pearls. And possibly a few painkillers. 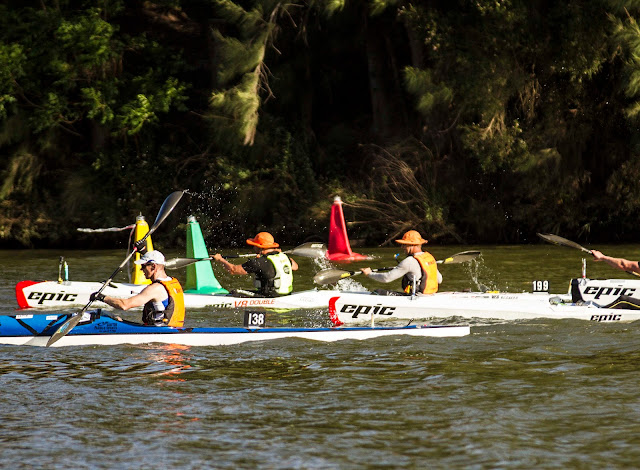 Our start was the last one to go, in with the ocean racing skis and the unlimited class, boats that are designed with no rules inhibiting their speed or stability. In sporting terms, we were definitely surrounded by first graders. We resisted the urge to throw down our traditional 'case of beer on the bridge' hot-spot challenge, because frankly it was a bit silly considering the wheels that this end of the field had at their disposal.

For once, certainly in the context of the races we'd done together so far, we had some red-letter conditions off the start, with a gusty westerly right up our clacker, and the remnants of the ebbing tide. Considering the speeds we'd been averaging, I had no idea what to expect in terms of a finishing time, but I did know that if we didn't tear ourselves a new one getting the most out of the start, it would be a long night. 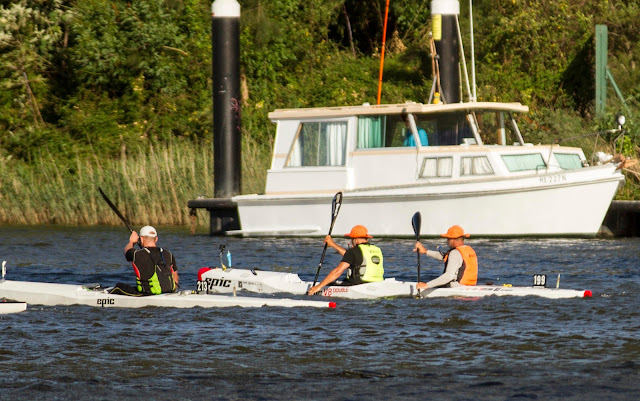 From the gun we got ourselves into a nice rhythm, ticking along with the spray flying forwards over our heads in the wind, and clipping through waves that whilst not shaped up to offer any sort of ride, were still making us feel very cheery. Club-mate Mark hooked in behind us and stayed there until just before the 60km checkpoint at Wiseman's, where he must have done the quietest capsize in history, because we looked around when we arrived and he wasn't there. Tucking in behind may have offered him a small ride on our substantial wash, but that would have been offset by having to listen to the pair of us carrying on as we snuck along the river banks in the dark, trying to distract each other from the increasing grind of a building head tide. I reckon we bored him to sleep and he fell in. Our other club-mates Ross & Robyn snuck onto our wash at some point in the dark, & after a few minutes listening to the pair of us Ross started vomiting uncontrollably. 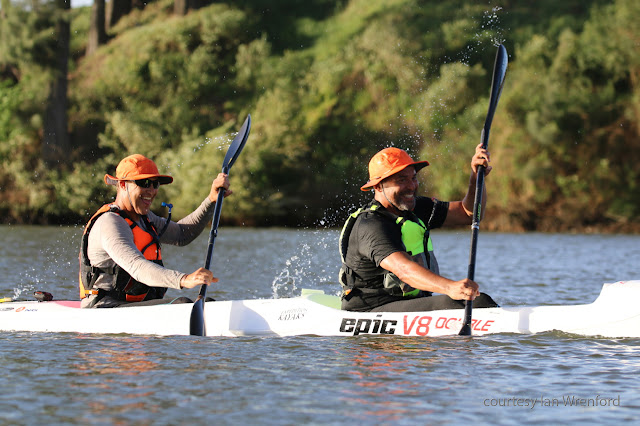 Topics ranged from top-ten best balls ever bowled, biggest sixes, greatest moments playing rugby for Petersham (our winter pursuit in the good old days), all wildly exaggerated complete with loud calls of 'bullsh*t' and roars of laughter. The longest diatribe was the 'best sledge ever' topic however, & we agreed I won that with one I copped/deserved one afternoon against Wests. Walking out to bat with my best Viv Richards swagger, stepping back to look at the gaps in the field, all very slowly, indulgently holding up the game, when suddenly the Wests 'keeper dropped on his hands and knees next to me and started patting the ground around my feet. 'What are you doing Grimmo?' comes the well rehearsed call from second slip, 'Sorry boys, just picking up all the tickets this bloke has got on himself'. Beat that...!

The highlight of the dark misery of the flood tide was launching into a massive dead tree sprawled across the river and smashing branches in all directions. Poor Mark then careened into the back of us & all the timber we had sent flying landed on top of him. 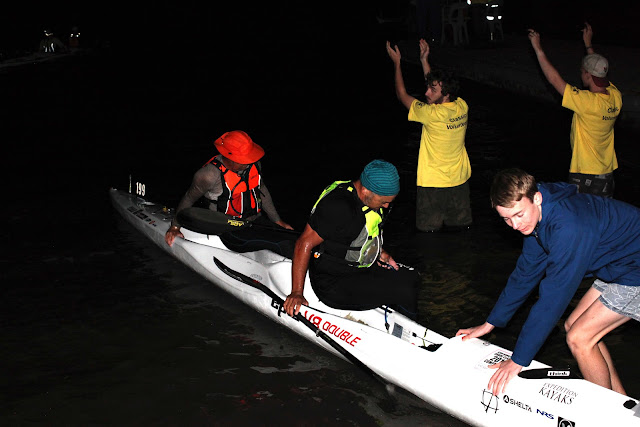 We hit the ramp at Wiseman's in good spirits, with about 3 hours 40 minutes to get under 10 hours, and 41km to the finish. Now that takes some doing when you're basically hurting and half rooted, and I figured it was probably beyond us based on form, but it was worth going out hard & seeing how long we could hold the required rate.

This was the point where thankfully horse racing and kayak racing diverge. Not the 'shoot the slow ones' thing, the 'highly irregular performance after a massive betting plunge' thing. For no plausible reason, we actually started to hit our straps and the ski started to hum. At one stage I did even start to see smoke on the water (you'll have to watch the video above to spot that...)

The second ebbing tide grabbed us and we barrelled along to the finish cutting a spectacular bioluminescent swathe, averaging well over 12kmh all the way home, to finish in 9 hours 37 minutes. If there were stewards, they would surely have hauled us out of the river & made us pee in bottles before agreeing to let our time stand. 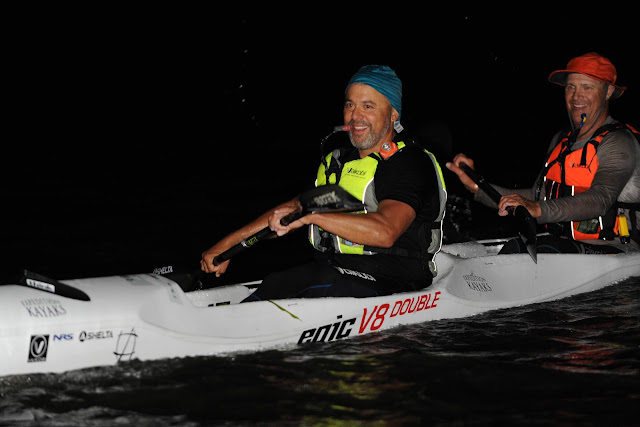 Axe's daughter Molly & his mate Marty were at the finish to cheer him on, as well as my trusty 11-Classics-and-counting Ground Crew of the Year. There were smiles, backslaps, & 'how good are we's' all round. Not the result I was expecting, in fact a bloody good sight faster and none of the suffering I usually compartmentalise as part & parcel of this great race. I put it down to our awesome tapering. 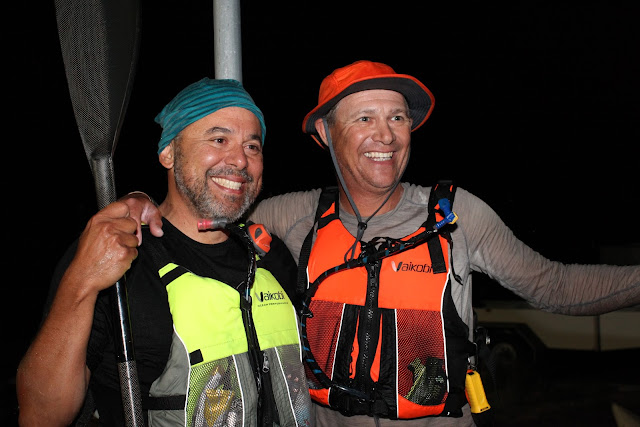 Such a fun few months, with a (small) bunch of sunny morning training sessions and a couple of road trips to races where we got to shoot the breeze and have a bit of much needed bloke time.

If you've got an old mate who is still pretty active & doesn't mind a challenge (even if they're not much of a paddler), I reckon its a pretty damn good template. 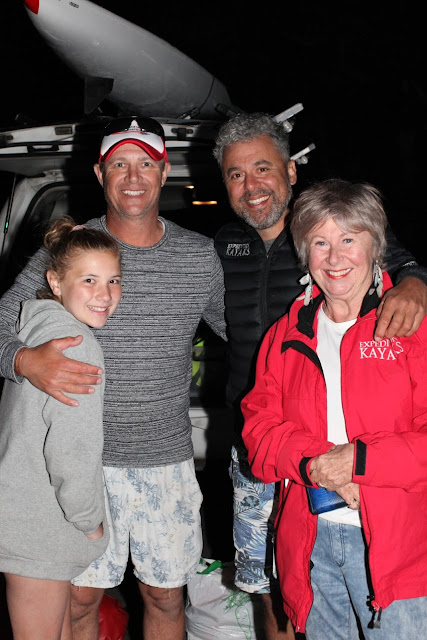 Thanks to all the Sutherland crew for their boisterous support during the races, to the 400+ volunteers who make this extraordinary event possible, and also to those who sponsored our race in support of the Arrow Bone Marrow Foundation.