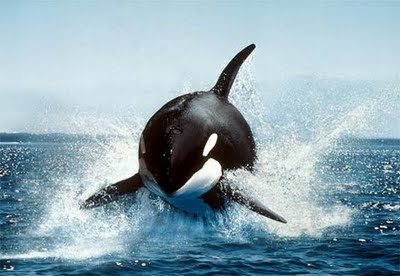 Orca or Killer Whale (artist unknown)
On a paddle yesterday out through Sydney Heads with Rob Mercer & Graham Dredge, I had one of the most amazing wildlife experiences of my life. It began when we noticed a huge amount of splashing & water disturbance on our way back across from North Head. 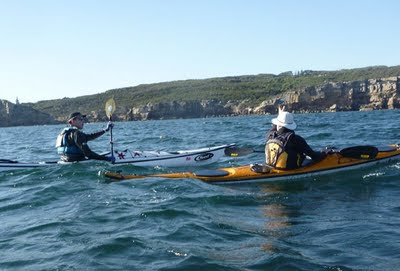 Rob & Graham before the cetaceans stampede
We saw a very big pod of dolphins about 300m across heading our way like freight trains, blasting through the water, breaching & diving, with the occasional very big splash that seemed to come from below. Rob was looking one way & Graham & I another as the mayhem got closer, and he said, rather loudly 'that's a very big fin for a dolphin....' We all scanned the water for further proof of 'something unusual' & saw a couple of very large, black pointy fins powering towards us obviously in pursuit of either the dolphins or whatever the dolphins were chasing. I caught a flash of black & white just as Graham said 'Killer Whale's eat great whites, don't they..?' 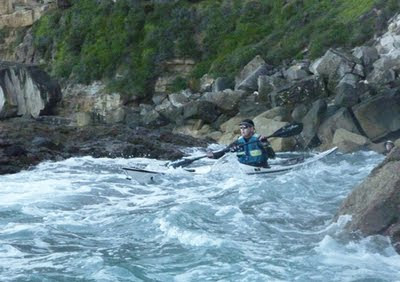 Graham Dredge picking his way through a North Head rock garden in the Rockpool GT
Sure enough, there were two, maybe three orca chasing down the dolphin pod at almighty speed. I can't say I've ever seen a dolphin looking sh-t scared, but I can go to my grave safe in the knowledge that I now have. A bit of research on the web last night indicates that Killer Whales will have a munch on 'Flipper', and the whale watch skippers that operate off Sydney have been reporting sightings of these majestic hunters. A little penguin that we'd seen on the way out was looking decidedly nervous as the cetaceans stampede bustled past. I wondered aloud if the little dude had seen Happy Feet. As always when something as fast as this strikes you dumb, none of us managed to squeeze off a photo. Maybe next time.... 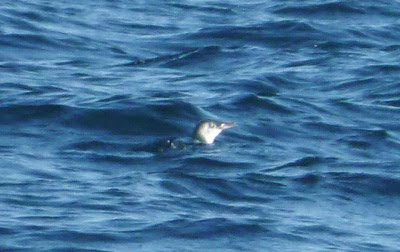