The NSW Sea Kayak Club recently did a survey which showed a fair amount of latent interest in ski paddling, a factor which I found surprising considering the previous parallel universes in which the two sports have mostly existed.

Ian on debut, Tony watching on....
One of the club leaders, Tony Murphy, sent around a friendly email asking if anyone was interested in doing a ski-only club paddle, a chance to try each others boats, paddles & swap training & technique tips & tricks.

The guys heading across the remnant storm swells to North Head 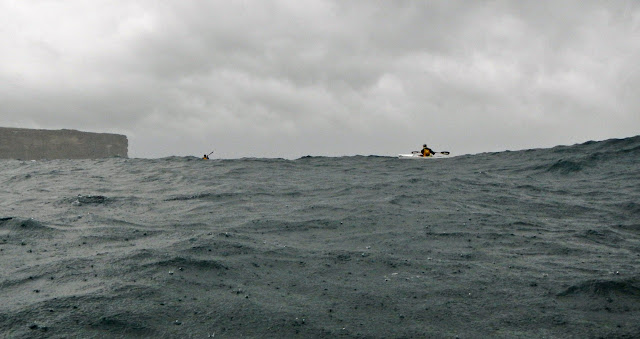 The take-up was pretty strong, but Sydney's wild weather conspired to reduce the numbers of those willing to take on the chill without a deck covering-one's-lower-half to just four.
So Mark, Ian (paddling a ski for the first time), Tony & I did a cruisy 18km on Sunday, leaving Rose Bay, heading out towards North Head, back down with the swell towards Dobroyd Head, into Balmoral for a coffee, then back to Rose Bay. 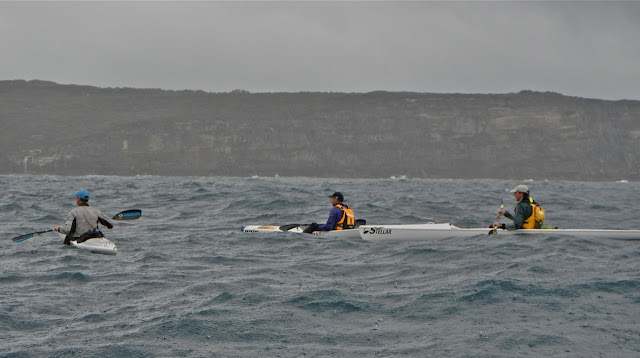 Discussing a down-sea line from the middle of the heads
We had some pretty varied conditions! Rose Bay was clam flat with a Nor' Westerly head/beam wind to about 10 knots, which swung nearly behind us as we crossed from South Head. The remnant swells from the preceding Big Wednesday produced almost unreadable wave patterns as we paddled further out into the heads, and the wind intensified & swung more to our beams as we battled across to Washaways. Despite a big volume of moving water, you just feel the hydraulics underneath you from the swell & confusion, there was bugger all going our way, regardless of what direction we pointed our noses. 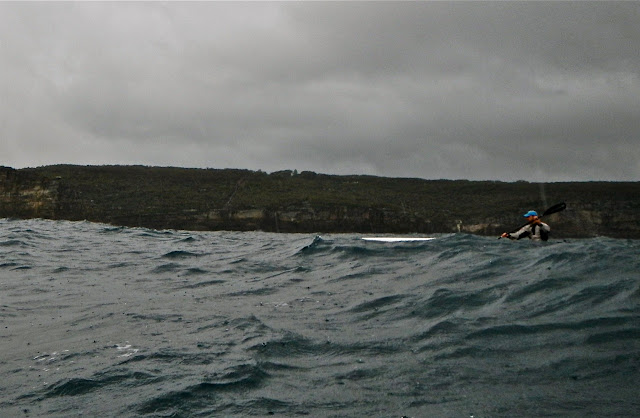 Schroeds cracking a runner
We thought there'd definitely be a wave of some description off Grotto Point, but it had all of the energy knocked out of it & was barely breaking. 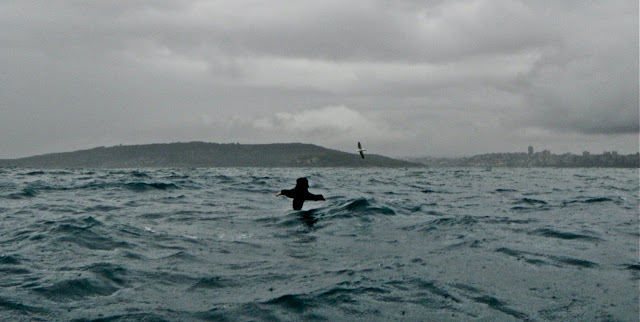 A juvenile Albatross crosses my line

Schroeds & his mate the Gannet

Tony & Ian
Although the plan was to paddle non-stop, ostensibly to keep warm, we couldn't resist the coffee houses of Balmoral Beach & traipsed gallons of water in among the landed gentry sipping their Sunday morning Latte's. Only fellow kayakers would for an instant have considered our presence sat so civilised at the table to be anything other than bizarre. 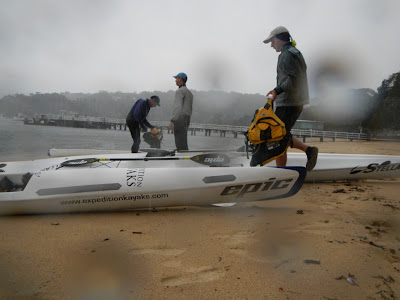 Sunny Balmoral
Ian & Mark swung by Neilsen Park on the trip back to swap skis, and after a few early wobbles Ian handled Mark's elite Red 7 like a pro, maybe a slightly tense pro...
A top morning had by all, not my typical short sharp painful hour's ski blast but more a sea kayaking-style cruise, and lots of fun.
Tony has promised more events for the NSWSKC 'Ski Bums' so clubbies keep an eye on the calendar. 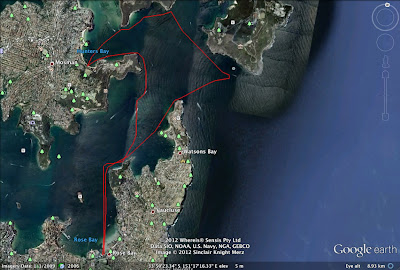