I’ve entered the upcoming 20 Beaches Ocean Ski race, an iconic Sydney event that traverses the multitude of beaches from Palm Beach to Manly, and is always run downwind (as long as there is some wind).
It’s been on my list for a few summers but each December an inevitable end of year commitment has meant I’ve missed my chance.
This year, I’m clear, and I’m going to have a go, and I’m really looking forward to it.
To tune up, I took my V10 on a downwind run from Watson’s Bay inside Sydney Harbour, 27km down the coast to La Perouse, just inside Botany Bay. It’s a run I’ve done countless times in a kayak, but never in it’s entirety on a ski. Rob came along on his Rockpool Taran, keen for a really hard paddle to keep in shape for a possible ‘Degree’ paddle we have in the pipeline.
I know just how challenging conditions can be with a summer Nor’ Easter blowing, with cliffs lining the majority of the route, all angled slightly differently to the prevailing swells and wind-generated sea. A strong northerly wind would hopefully knock the multidirectional nature of the water down a few notches, whilst a long period, but not particularly big easterly swell would also (hopefully) be overrun by the sea running our way. These were all factors I took into account as being likely to moderate the typically confused conditions that can prevail along big sections of the route.
I also figured that the course the 20 Beaches race follows doesn’t have anything like the coastal features throwing back long stretches of rebound, so as a tune up I’d probably be ratcheting up the technical nature of the paddle in comparison to what I may encounter next weekend.
If you had to summarise this paddle, there are five very distinct parts, all with their own unique features.
First, you plug out of the harbour, around South Head and then east out to sea across the south moving sea & wind. It’s usually quite spectacular as you are rising up over the swell and the wind & spray is in your face. 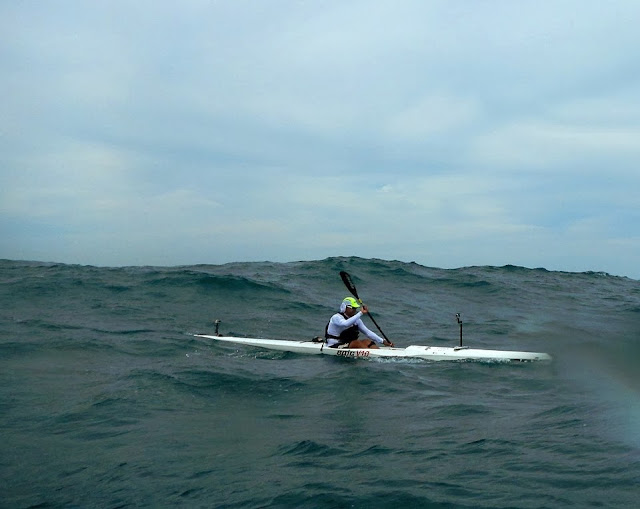 You then turn south with a clean line down the coast to Magic Point, the headland off Malabar.
Until you reach the northern headland of Bondi, the cliffs throw back a miss mash of clapotis and rebound. It’s confused, it stands up without warning and robs you of the chance to establish any rhythm or tempo to your paddling.
From North Bondi to Magic Point you’re a long way offshore, the effects of the cliffs are mediated and you tend to get clean, long runs. It’s a hoot.
Magic Point marks the point that the cliffline trends west again, but not before you’ve negotiated at close hand some terrific bounce & mess. Or in my case on Wednesday, have little swim through them! From there to the southern headland of Botany Bay things tend to ramp up again, but once around Cape Banks everything flattens out & you get a long but easy cruise into the shelter of Frenchman’s Bay.
In a kayak I look forward to each section as  chance to test something different, with relative stability in a rough water boat that allows me a stable rest every now & then.
In my V10, the chance for a breather was more or less taken away, and the imperative was constant to keep on getting a good catch, and therefore keep going through the confused seas at a good rate.
I can’t remember being so engaged in an ocean paddle, nor as exhausted by the end of it at the relentless ‘charge’, and the demands for subtle changes to my stroke to keep on moving forward. I don’t think Sydney Harbour to Botany on the back of a Nor Easter is going to become Sydney’s answer to ‘Miller’s Run’ any time soon. Stew at Think assures me that Malabar to Bondi in a southerly is way more fun, but not too many guys enjoy the cliffs north of Bondi on a ski!
The video above captures most of the stages of the paddle, from the easterly start, to the bounce off Dover Heights to the admittedly rare clean runs that we hooked into off Coogee & Maroubra. It also captures the easterly swell than ran across our course the entire way, complicating things for me no end. It was hard work, but a day on a mighty heaving sea with shearwaters dipping between the waves as you fly along on runners remains one of life's great and rare privileges.
Rob in the Taran was rock solid, punting his boat along as fast as me in everything except the most pure downwind conditions, and able to thump through the confusion far more effectively than I could manage. It's a hell of a boat, and he's a hell of a paddler.
It makes me ponder the level of skill you need to really rip into committing ocean conditions on an elite ski, in comparison to what you can do in a modern fast tourer like the Taran or Pace series. No conclusions, just pondering! We get to pick Oscar's brain on Monday arvo, so maybe after that I'll have a few more clues!
There are a lot of paddlers new to skis out there, and to those eyeing off the challenge of an eastern beaches downwind run, make sure you get your safety protocols in place and paddle with very capable peers.
at December 06, 2013