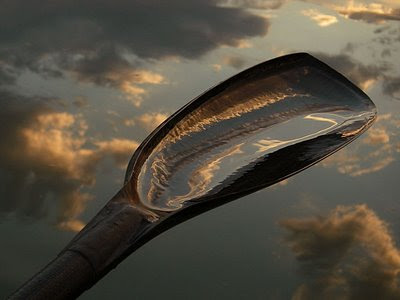 For a few months now I've been listening to various theories on paddle size, shaft length, feather etc, in relation to both speed & effort, for sea kayaking. I have been bashing away on my weekly 12.5km fitness paddle with what would be regarded as a 'Large' wing paddle with a full carbon shaft. I'm managing to sit just under 9.5km/h for the duration, in my Rapier 20, a pretty damn fast kayak, by any measure. Plainly, a paddler with a racing background (I have none), better fitness and a more refined stroke would be able to squeeze another 1-1.5km/h out of the boat on flat water, so I'm not speaking here from the perspective of an expert, or an experienced speedster. Ian Tordoff crossed the English Channel in the Rapier 20 averaging 12km/h, which is just phenomenal considering the effort I require to crank it up to that speed. During the week I bought a mid wing paddle - thanks again to Tony & Jacqui Williams at Epic - with a more flexible carbon/glass shaft & this morning was my first hit out with the new blade. As is the norm for the Friday morning paddle, conditions were very light on the bay with just a 10 knot westerly on the beam, so nothing helping or hindering progress. My dodgy training mantra is to go as hard as I can for as long as I can, in the hope that over months I'll be able to harder, for longer....(I hope Mike Eggleton isn't reading this - still waiting for your training notes so I at least have some idea of what I'm doing mate..!)

So, I set my blade to 60 degrees, 212cm, down from a ridiculous 77 degrees on my larger wing (yes I failed HSC maths but the unnamed highly qualified sea instructor who set the angle for me is well versed in the arts of geometry), & off I went. The first thing I noticed was the appreciably higher rating possible with the smaller surface blade, although that for now doesn't transfer into a marked increase in speed. I hit my turn mark in a little less time than I've been doing lately & finished the course (now 12.75km due to the Desal plant 'waterworks' diversion) in 79 minutes, again, around 9.6km/h for the duration. This is almost exactly the same time as I've been doing with my bigger wing, but at a hugely reduced anaerobic toll on my shoulders & torso. I felt pretty fresh at the end of the paddle, and I'm putting it down to the less brutal catch, combined with the extra flex that a full carbon shaft denies me. I read a great quote the other day that made me decide once & for all to 'power down', and to paraphrase it was simply stating that a large blade only teaches you to paddle slower, unless you're a very powerful paddler. I sure as hell am not a very powerful paddler. What's the advantage of this lower-impact paddle if it hasn't immediately helped my speed, especially if I do want to try to get faster? Well, I figure the potential to get faster which is accommodated by the higher cadence possible with the mid-wing will give me greater scope to build speed, than was possible with my old large wing.
As an exercise in comparison, I grabbed my bigger wing at the end of the paddle & put my head down for a 200m sprint, getting the boat to 13.3km/h. Then I switched to the mid wing & did the same distance as fast as I could & only managed 12.7km/h. So, the heavy catch & the inflexible shaft on the larger blade definitely transfers to speed when you really go for it; either that or I was completely knackered by the time I got the mid wing back....
All well & good, you may say, but how does this transfer to sea kayaking when we're not out on the sea in a race, and where our hull speeds greatly reduce our ability to go very fast anyway? I think it comes down to learning, or training yourself to have the ability to accelerate on the sea, and thus hook into all of the free assistance you can gain from the dynamic water of the ocean. It's something we as sea kayakers mostly lack, and it can only be learned through a training regime that has some form of paddling against a clock built into the session. For a superb technical breakdown of what I'm poorly trying to describe, read Rob Mercer's 'The Catch' article.
I choose to paddle on the sea with my Mitchell Blades Voyager, as I can cruise along with minimal effort - it pulls a moderate amount of water & has a less aggressive catch - but still has enough clout to sprint onto a wave if I sense a free ride. If I'm going out to do some higher octane instruction, or having a surf, I'll take the Poseidon for it's more aggressive catch & bigger blade area for technical strokes. I also prefer the splits so I can drop down a gear with the paddles, taking it down as low as 209cm for close quartering, and back out to 212cm for a cruise. As a general rule, the bigger the blade surface, the shorter the shaft you can afford to have for the same returns in speed. One of the most experienced expeditioners in the country, sea instructor Keith Oakford, recently used the Poseidon on his circumnavigation of Kangaroo Island, and spoke highly of it's capabilities in the technical water they encountered, & also of his increased ability to put the speed on when he needed it. I reckon to have any hope of hanging on to Keith's bootstraps on a sea paddle where he was using the Poseidon, I'd have to use a Voyager with it's smaller impact & try to rate higher, as I will now do my best to learn with my new mid-wing paddle. In a round about way, that's why I'm exploring these side alleys of sea kayaking - I reckon the lessons learned long ago in other paddle disciplines have an awful lot to offer our hybridised sport.
at May 15, 2009