The buzz around the Tiderace range has been palpable, both Rob and I have been asked a lot of questions about the designs we've landed, the Xcite, Xplore and especially the Pace 18.
I'm sure the curiosity about the Pace is borne out of the long distance ocean touring we've been exploring in the past 12 months, in fast kayaks like the Rockpool Taran and the Epic 18X.
People are keen to know how they all compare, and what this new contender in the fast touring genre has to offer. 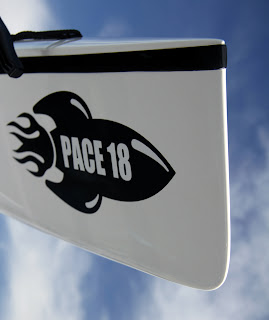 In my eyes there are a few things this latest generation of plum bow designs have to achieve in order to be considered as serious sea kayaks.
First of all, they have to be fast. By fast I mean capable of holding 9.5kmh on flat water without approaching terminal hull speed. A technically sound paddler with middling fitness should be able to maintain these sorts of speeds with nothing more strenuous than their 'exercise' output.
Second, they need to be stable, with sea manners and secondary stability which enables an average paddler to sort themselves out on the sea, without having to raft up. They should also get more stable with anything approaching an expedition load.
And finally, they have to handle following seas in a predictable way. A sleek, low rockered profile is great for calm water, but what happens when it gets steeper, will the stern start to slew around as the bow invariably locks into the trough or the wave in front of the kayak?
I'm not one to stamp certainties onto a kayak design on the strength of a couple of paddles, but I can report on a pretty comprehensive test in the Pace 18 off Port Macquarie during the week. 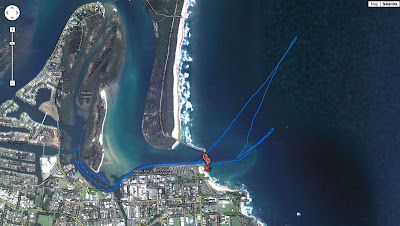 I was in town for a morning to deliver some boats, and took the Pace with me on the chance that I'd get a chance for a sea paddle. 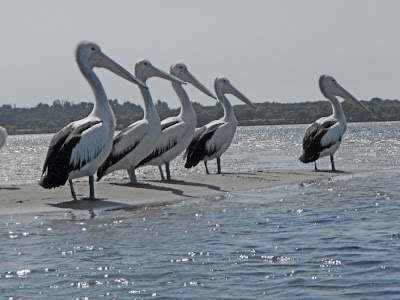 Staunch locals
Launching off the front beach alongside the break wall, I paddled a few minutes out into a building sea breeze, before turning and running back to the river mouth, just to get a feel for the hull. I then turned again and this time punched out for 20 minutes, running one last time back, this time with a fairly freshly developed sea running my way.
I carried on against a stiff tide up into the river and estuary, turning and coming back downstream, riding a few steep, almost standing waves on the bar before landing back through the surf at my start point. All up a tick over 10km. 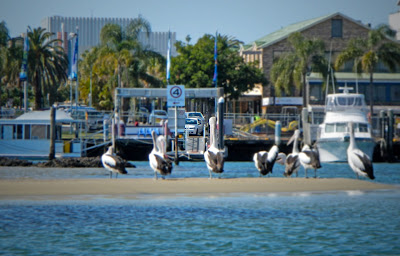 Port Macquarie Marina
In the context of trying to get a feel for a boat, it was a pretty good microcosm of a bunch of different wave and sea patterns, a fresh breeze and then something we don't often get around Sydney, a strong wind-against-tide effect.
In summary, and using my own key indicators for these types of boats, I can offer the following.
Was it fast? Well hell yeah, probably the fastest decked ocean kayak I've paddled, with the exception of the Valley Rapier. It ran nicely into a breeze with a very low wind profile, shed the oncoming sea nicely and didn't stall over the small, mostly wind generated waves I was punching into.
Stability was above average in the context of these new fast boat designs. I stopped at my second turning point to photograph a beautiful adult Gannet and didn't think twice in the sloppy sea state about my stability. I paddle a wide range of kayaks & skis and as such I'm a poor judge of stability so please take that observation as you will. 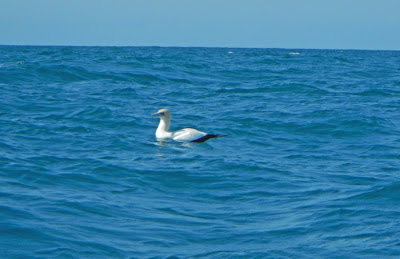 An adult Gannet off Port Macquarie
Finally, downwind, the one thing I was hanging out to test. My trace shows that I spent 10 minutes sitting around the 12.5km mark running back. Unfortunately I didn't have my heart rate monitor on, which is really the indicator of boat glide or run, as it tells me how hard I was working to generate the speed. Suffice to say, and I think the video bears this out, I was cruising. The hull ran like a ski, with shorter fast strokes occasionally to keep me in the sweet spot of the wave. The seas were hardly monumental, but when I got the chance to drive the bow down into a deeper trough I did succeed in burying it to a small degree in the wave in front. You can see this on the video as spray around the low forward mounted camera. This was deliberate and something I was keen to test. If you think about the dynamics, the bow will generally begin to stall in the full body of water forward, the stern is still running hard, and lesser hull designs will tend to skate around once you over-reach the optimum spot on the wave.

Port Macquarie from the sea
We had noticed it the day previous in smaller, slower waves on Botany Bay, but it was amplified in longer ocean waves, that the Pace 18 holds a hard line when this awkward stall occurs. Watching the entire video of the run back I didn't use a single correcting or braking stroke, sweep or stern rudder to bring the boat back online. It didn't broach or behave with any unpredictability, just ran straight and true with ruthless efficiency.
In the mouth of the river the bar was starting to produce some steep waves that were brilliant to surf along on, although it's pretty wacky when you are firing down the face of a wave and your GPS says you're only going 9kmh! Perhaps because of the volume of water running at me I wasn't able to bury the bow in these steeper waves, despite several attempts, but I suspect in breaking beach surf it wouldn't be so hard. Again I emphasise that I can't pass true judgement on downwind performance until I get it out in some big, fast and steep stuff, but what I experienced on Wednesday was very encouraging. 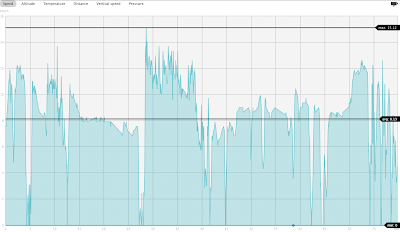 The trace from my short paddle, some good runs, some stuffing around, but good numbers when I had it working the way I wanted.
Landing again on the beach I got a pretty good thump from a wave and was able to pre-empt my broach and bongo slide into the the beach in a high brace, no surprises there (but this boat is not likely to feature among the quarter finalists in the surfing sea kayaks league table).
So far I'm really impressed, again we seem to have landed an innovative design that brings more to the water than we had expected.
I'll be paddling the boat in the Hawkesbury Classic, and sadly won't have an excuse for going slow other than not being good enough!
There is a demo day this Sunday at Vaucluse Bay where we'll have the full range of Tiderace boats to try. Stay tuned to the blog and Facebook page for times etc. 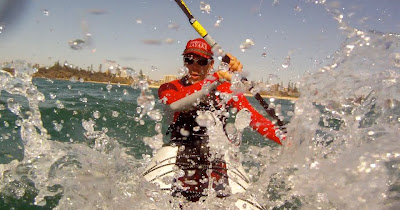 **note, everything I describe about this kayak relates to hull performance, the aspect of a boat design that we think is 98.5% of what matters. I don't mention comfort, seats, foot pegs or any of the ancillary things as I believe they are perceived so subjectively it's ridiculous to speak about them in anything resembling a review. The exception of course will be the day I can be confident that there are similar bum shapes to mine lurking out there in paddler land (hopefully there aren't too many!)