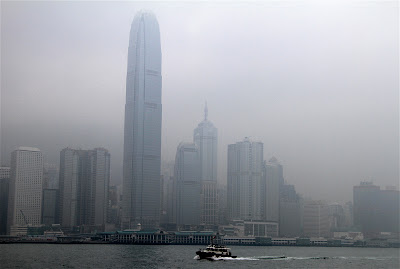 My business takes me away several times a year, as much as 40 nights in a year out of the country. My calendar is so crowded & my responsibilities to my young family obviously compelling, so I tend to make my trips a whirlwind of meetings & fairs to minimise the time away from home.
A particularly busy period is just finishing thankfully, with 3 days in Bangkok prior to Easter, then back to Sydney for some time with the kids, then off on Easter Monday to Hong Kong & Canton for another 5 days. I'm sitting at the airport at HK now feeling a bit knackered, with just the red eye flight to negotiate.
The one thing I miss of course in my travels is a chance to go for a paddle. I have taken the TRAK away with me a few times when I've been anywhere for an extended time, but it's not suited to these sorts of frenetic three & five dayers. So, for this latest trip to HK I looked up Rene Appel, the Epic dealer in the territory, to see if he had a spare morning to go for a paddle around his home waters.

Rene Appel
Rene is quite a guy, a Dutch born Hong Kong resident of more than 20 years, with a seriously beautiful home in the quiet bay area of Sai Kung, about half an hour's drive from the frenetic bustle of Kowloon. He has been the HK Sailboarding head coach for the best part of the past two decades, and has guided the team to five world championships, and their first ever Olympic gold medal at the 1996 Atlanta games. That is some over achievement when you consider the sporting prowess of the local Hong Kong teams in most other disciplines. 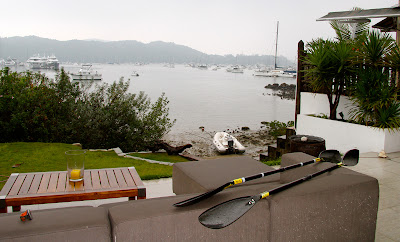 The view from Rene's front porch
He took up ski paddling a few years ago & has completed multiple Molokai races, as well as establishing the Dragon Run race in HK, and a race series similar to our own Ocean series.
We met & had a coffee, then stepped off his back lawn with a ski each & went for a paddle along the seaward coast of the territory. I have been coming to HK for many years, & this was a side of the place I hadn't seen. Rugged coastline with vertical islands rising straight out of the sea, volcanic geography, waterfalls dropping off the clifflines in the steady rain, the odd cluster of high rise development perched impossibly on a precipitous, doubtless very expensive piece of lofty waterfront rock, tiny leaping fish escorting us along as we cruised the coast. 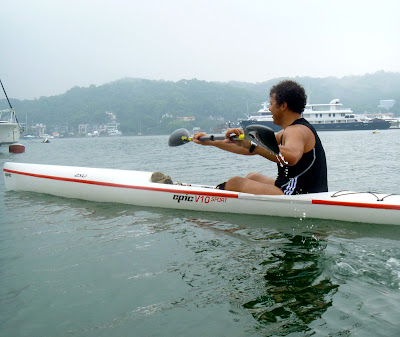 Right on cue as we reached the outer islands, the wind kicked up & started to produce some nice little runners, so we turned tail just short of the northern entrance to HK Harbour & ran home. I was in the ultra V10 Sport, a very light, stiff, and expensive layup in the Epic stable. Despite being a bit skeptical about the real performance advantages of these elite skis to a mug like me, I could definitely feel the extra glide that the boat had over my own standard layup V10S. Either I'm getting good enough to notice subtlety in surf skis or it's a palpable difference, most likely the latter!
We shot home finishing off with a dodgem course through the expensive Gin Palaces that line the bay near Rene's home, including a smaller 30 foot yacht with a sole population of cats. Figure that one out....

I was feeling very spoilt when he offered to take me down to the local yacht club for lunch, then topped that off with a ride back into Wan Chai where I had to shake off the salt water & return to my patrol of the Hong Kong Gift Fair.
There are some mighty differences the residents of HK face with their paddling. For starters, the sort of space you need to store a ski or kayak is usually worth a bloody lot of money! Almost everyone is in an apartment, and the storage options are limited to the chain of yacht & dragon boat clubs that line the waterways. Then there is HK harbour. Despite watching the traffic from the safety of the Star Ferry each day & plotting a wild line through the turbulence of the junks, pilot boats, dredges & San Pans that ply the harbour, Rene informed me that the Marine Police would be quickly onto an idiot like me attempting to run the gauntlet. Pity.... Here's hoping the suits don't try on the same access restrictions in our own harbour & waterways, but you get the feeling it's only a matter of time.
Presented with the opportunity to knock around with a genuine high performance coach I managed to do my usual trick of asking him 1000 questions about building fitness, muscle memory etc for paddling, how it related to his expertise area of sailboarding etc. His advice on diet & fuelling yourself for tough expedition or race paddling was worth the airfare alone, I just wish I had a tape recorder! 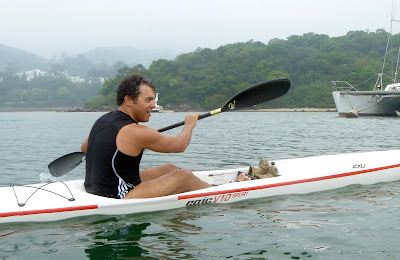 I've had a few people raising eyebrows about my recent curiosity for maximising performance in a more scientific way, with a couple saying it has no place in a 'fun' sport like sea kayaking. I guess I wonder how anyone could try to put a definition on 'fun'; for me the fitter, stronger & more skilful I get, the more I enjoy what I'm doing. The rare chance to speak to a guy like Rene just reinforces to me that there is no shame in attempting to be as good as you possibly can be, even in a sport with a hobby culture as strong as that which exists around recreational paddle sports. So many of our customers come to us with raised expectations of what is now possible at the pointy end of our sport, and I figure emphasising the attainment of skills & fitness as a precursor to getting out into some challenging water is a bit of a no-brainer. The problems start when paddlers head into that stuff without the skills & fitness. Bloody hell that's what airport lounges do to you, tangental blogging....! 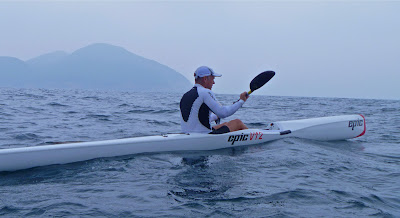 Thanks to Rene if you're reading this mate, it was really an awesome way to spend a morning in a place that I know so well, & now know from a completely different perspective. Your reciprocal paddle & lunch in Sydney is already arranged.....
There is truth in the adage that you haven't seen a joint 'til you've seen it from a kayak.
at May 01, 2011