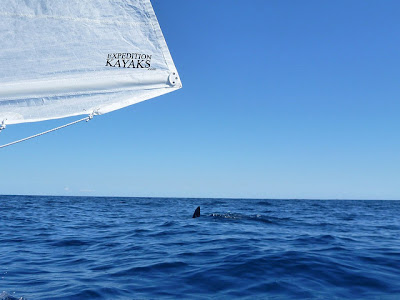 A recent posting on the Sea Kayak Forum which diverted into a discussion on the usefulness of shark repellent devices got me thinking about our toothy friends & their interaction with us as sea kayakers.
In 10 years sea paddling I've probably had a shark encounter at least two or three times every year, usually a flash under your boat or a fin off to one side.
I've been bumped a couple of times by something identifiable to my paddling partners as almost definitely a shark, and bumped many times by everything from what could have been a Great White Shark, to a Great White Turd. I can't honestly say I've ever felt a hit & known for sure it was a shark, the only time I knew for certain was when others actually saw it. 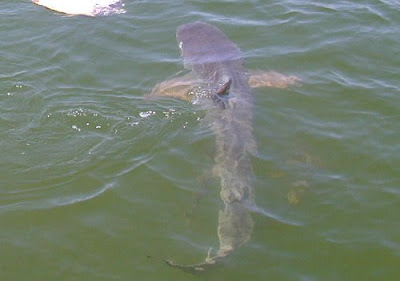 Top view of a curious Tiger Shark
At a recent talk on his round Oz paddle, Stuart Trueman was asked about sharks, obviously you'd expect a guy who paddled the entire coast of Australia to have some tall tales of great escapes from monster beasts of the deep. His reply was something I've observed many times over the years, it's over before you even realised what it was! Rob echoes Stu's thoughts on the toothy far north of Australia, where the vibration from your rudder seems to be a beacon to the sharks in the murkier water & it's invariably a target for them, with a sonar signature undoubtedly similar to a big fish in distress.
Paddling through the crystal clear waters of the Capricornia Cays, about 100km off the coast of Queensland, in an area Brian Towell described to me as the most shark infested place he's ever been, having spear fished there for many years, we saw plenty of big Tiger Sharks. They would barrel along straight at you from the deep (at least the ones you could see coming from in front), veer off at an alarmingly fast rate once the 'Snackability ID' had been made, then almost always come back around for a slow pass just for a look. One of the things that strikes you is not how long they are (it's impossible to judge from a kayak really & I swear one of them was 27m long), but instead how round they are. Their girth is amazing, less the sleek greyhound of the sea, more the swimming Brahmin Bull on steroids.

Tigers have a fierce reputation and are justifiably an animal you probably want to avoid being in the water with unless you know what you're doing. However, it soon became apparent that these big sharks were firstly not the slightest bit interested in eating us once they worked out what we were, & then became almost playful in their curiosity. While it is a bit unnerving to see the distinctive mottled stripes going under your boat just a few feet below in clear water, after a few encounters it became a rare thrill to see them so close. 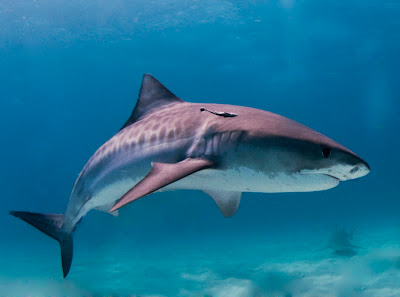 A beautiful Tiger Shark
When I mentioned these shark tales to Tim Harvey, the manager of the Heron Island research station, embellished by a few beers at the island bar, all jokes stopped. Tim looked me square in the eye & said 'you realise there is no way in hell that those sharks will hurt you, don't you?' His message was simple, treat them as a beautiful animal of the deep like a whale or a dolphin & enjoy the privilege.
Attacks on kayakers by sharks are most uncommon. Experts point to the fact that 98% of sharks eat small fish, & taking on something 5m long in the natural world is bound to have nasty consequences for a predator. It's only really Tigers, Great Whites & a couple of other big sharks that will have a go at something as big as a marine mammal, because basically the rewards aren't worth the risk & effort.
Where that changes is in the murk. Dawn & dusk, a river mouth after rain, estuarine water with silty outflow etc, are places where the risk is undoubtedly amplified, as the sharks have much more difficulty in identifying their prey. On the same trip my anxiety levels rose when we reached the inshore area of Keppel Bay, with the water as brown as a cup of cocoa. If any of those big buggers were going to be forcefully curious it was surely in this muck. My nerves weren't helped when I remembered that Rob had said there were crocs around this area, & I yelled the question across the wind:
"Hey Rob, is this where you said the crocs were….?"
"Yeah, why…..have you seen one?"
Thanks for that Mercer, about as funny as a shark in an elevator.
Around Sydney Bull Sharks pose the biggest threat because they have a strong salt tolerance & can get right up into the brackish fingers of harbour & estuary systems & do tend to hit first & ask questions later. They've knocked a couple of paddlers out of their boats in the upper harbour, with no more harm done than a bruised shin climbing quickly back on board & maybe a strained sphincter...
Stu again mentioned a massive hit he copped off the WA coast, which moved he & his fully loaded kayak about an inch. Not much you say? Try swimming at a loaded kayak from below, head butting it & getting it to budge. Importantly though, the 'hit' is where it ends. I can't find may examples of a shark making a reconnoitring strike on what it hopes is a dying whale or a big seal, getting the fright of it's life when instead it smashes it's precious snout into 120kg of hard laminate, & still thinks it's a good idea to head back & have another bite. Can you imagine the fright the poor shark must get?
I think sharks are the single most misunderstood creature in the sea, sensationalised by films like Jaws, inducing fear so far & above the actual risk they pose as to make it almost a Monty Python-esqe farce. Only about 1400 people a year in Australia are attacked by sharks seriously enough to require hospitalisation, & only about 15 a year die, & they're mostly little kids, no big deal right…..? Sorry, sorry, that should read dogs, not sharks.
Happy paddling!
at January 12, 2012