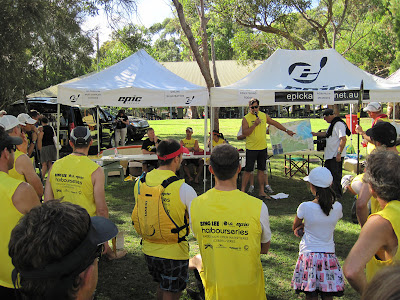 A rare Nor' Easterly forecast greeted the participants in Saturday's Bay Runner race, an event which was curtailed from the original Kurnell downwinder to a triangular 18km course by some red tape.
Rob & I lined up in our 18X & Taran respectively, and despite racing as a pair, it was soon apparent that Rob was well on song as the gun went off. Rob was in great form, footing it with the mid packers on skis & even throwing in a few friendly jibes about being an old decrepit bloke on a canoe! I struggled along, thinking that a recent flu bug was gone, when in reality it was just sitting there dormant waiting for me to do something requiring real exertion. We had eyed off this Monday just gone as a possible One Degree South date, I can promise if I had gone Monday I'd still be out there heading for JB!
I watched Rob disappear & figured he'd just go for it, & do the best time he could muster, but as I reached the final turn I saw him sitting there waiting as we had agreed prior to race to finish together. H'd been waiting almost 10 minutes for me so would have put in a terrific time, well in the middle of the pack with the skis & faster OC1's. 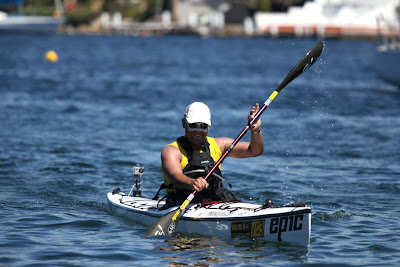 Crossing the finish (pic by Steve Newsome)
Despite my own whining, I admit to being very excited about participating in & now paddling one of these ocean races in a sea kayak. When you line up at the start you can see that everyone taking part has a plan, has been training, is out there to do their best, and they're all essentially racing against themselves to try to better a previous time or placing. It's a way different culture to my own sea kayaking roots but it has it's appeal for the athleticism & endeavour.

The race itself was pretty much on flat water. The Nor Easter had barely come up by the time we reached the downwind can & the wind strength wasn't sufficient to produce a sea worthy of riding. Still, any morning out on the sea is a good morning. The tragedy of the forced format change was that as the clock struck 1.30pm, the scheduled race start time from Kurnell, the wind cranked up & produced the sort of fresh following seas that would have made this race an absolute beauty. Next year….
We sponsored the race & will continue to get behind events that get people out paddling on the ocean. Steve Newsome & his gang from the new & entusiastic Souther Districts Ocean Paddlers did a terrific job, despite all of the setbacks, in getting such a big field out on the ater & meeting the safety requirements asked.
The next chance us sea kayakers get to take part in one of these ocean races, as many of you who are able should grab the opportunity. It's a window into another paddling culture & one from which we can learn a lot.
at February 29, 2012