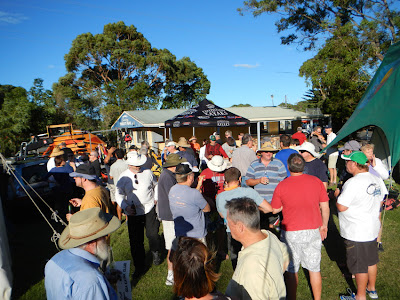 Beer & Pizza Party
Thankfully, the 2012 one was just like that, the absolute premier event on the national sea kayaking calendar primarily for the reason that it's there to get people out on the sea, often for the very first time, and year after year that's the minimum the guys at the NSWSKC manage to deliver for their members. 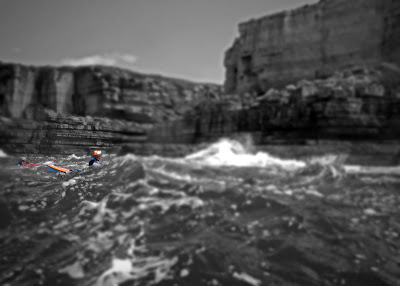 Matty & Fernando mixing it up
I was privileged on the Saturday to help out Matty Bezzina guide a group of 12 from Honeymoon Bay inside Jervis Bay, all the way out & around the imposing cliffs of the Beecroft Peninsular to Currarong, a paddle of 26km thereabouts.
At least half the group had never seen seas or rebound like the at-times industrial strength clapotis that this tiny little sea route can produce. Good training, a competent group with several experienced and trusty club paddlers there to keep an eye out meant that these guys had a lifetime experience around a cliff line, on a day that you can bet they wouldn't have dreamt of taking on, on their own. It was also nice to only have to paddle 26km to get to Currarong….. 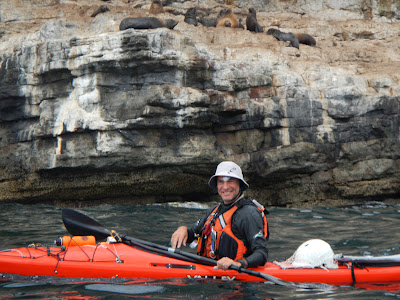 The Drum & Drumsticks seals & their smelly mate
Watching the video above, you could be excused for thinking, 'hey what a great multi-day trip, imagine seeing that variety of water, cliffs, wildlife over a week's paddling!' It makes you realise what a special place this is for a sea kayaker, a bit like the highlights reel that only shows the tries & the big tackles.
Memorable moments at Rock & Roll for me included meeting Paul Caffyn & Sandy Robson for the first time, renewing acquaintances with mates in the healthy & growing sea kayaking community, putting faces to names (or forum monikers!), and just getting out on the water to smell the roses.
I love the challenges I've set for myself lately in concert with Rob & Chris, & they bring a special satisfaction in the training & execution, but every year Rock & Roll reminds me why first & foremost I define myself as a sea kayaker. Drifting along a sublime bouncy coastline in water you earn through acquiring skills, poking into caves, rock gardens, littered with sea birds, seals, sharks & even a breaching Marlin is pretty hard to beat. 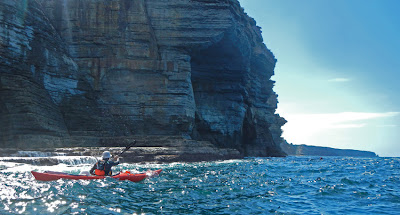 Beecroft….what a place.
Bravo to event organiser Campbell Tiley, Commodore David Fisher & all of their club mates who give so freely of their time to safely grow their sport. Thanks to everyone who came along to the EK tent for a chat, bought some gear, tested a boat or generally shot the breeze over the weekend. If you are fair dinkum about your paddling & haven't been to a Rock & Roll you really, truly don't know what you're missing. The bummer is, you've got another year to wait….